それでも歩は寄せてくる ・ When will Ayumu Make his Move? - Volume 2 Thread 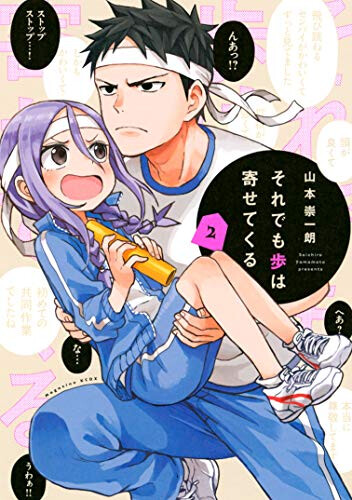 If you need any general info about the book, please check the Nomination post for more details (´｡• ᵕ •｡`)

Also, note that this is an offshoot club’s thread, meaning that we have already finished reading the first volume, that you can find at それでも歩は寄せてくる ・ When will Ayumu Make his Move? - Volume 1 thread (ﾉ◕ヮ◕)ﾉ*:･ﾟ✧

それでも歩は寄せてくる - When will Ayumu Make his Move? - Volume 2

I read chapter 15 today and I think it was fairly easy, but at the beginning something threw me off:

You have the general meaning correct.

The topic is １ (first school term/semester).

The comment he’s making about is it that it was (harsh, terrible).

Note that the “ly” part only comes into play when it ends in な to be used as an adverb. Since it’s ending in だ here, it’s an adjective of the subject. The subject is unspoken, but we can infer it to be １.

And the ので gives this as the reason. I believe this connects to his line at the end of the prior page (giving the reason why he’s studying for a test),

I said I wanted to try to actually participate in this one, soooo… hi there!

Every time I get through one of these chapters, I come away thinking, “Oh. That was cute.”

Anyway. I actually have some questions about the very last panel. I think I got the gist of it, but I kinda just want to confirm/have it explained/learn I’m totally wrong if that’s cool.

It appears I might need to look into using monolingual dictionaries as well… possibly quite the hurdle, but good to know nonetheless.

That was super helpful; thanks for the explanations!!

I finished Chapter 15, and went ahead and filled out the vocab as I went, since it was looking a little sparse. I also adjusted some formatting (alternating colors, gave more space to the definitions and notes sections, and some alignment stuff that was easier on the eyes).

I did have a couple things that I came across that I’m not totally sure about.

I am happy to be back into this manga. It’s super comfy, much like Takagi-san, but it does have the feel like it challenges me a bit more in the grammar here and there, which is good! As for some specific comments on the chapter:

After the little break from we had from Ayumu, I loved that opening panel. Perfect way to start a volume. I’m realizing I missed this more than I thought! Maybe that’s a sentimental attachment to my first manga, but either way, it’s great to be back. I’m also feeling so much more comfortable than I did in volume 1.

Actually, one more general question, too. Late in the volume there’s a use of だって and I’m pretty sure I get that panel and it’s just functioning like “also” here, but だって is one of those words that also remains pretty elusive. When you look it up, you get a long list of seemingly disparate meanings: “because, but, after all, even, too, they say, etc.” So… is there a good way to either determine how it is being used in a given instance beyond running through the options, or a better way to think of the word’s function as a whole that I’m just not seeing when looking at a contextless list of possible usages? I mean I see how bits of it could be very obviously different contexts, the usage here is 私だって and I have a feeling it’s not “they say I” haha. But since it has so many usages, particularly sort of non-concrete, grammar part ones, I just can’t seem to figure this word out.

A few years in, and なんて still throws me off a lot =(

If this なんて is emphasizing the content of the word balloon it’s in, then I read the two middle word balloons something like, “You solved it instantly from upside-down, and even (went) so far as to write (upside-down).”

In this interpretation, which I can’t say if I’m right or wrong, I’d say the writing part comes off as sounding even more impressive than the solving part.

I constantly return to Maggie Sensei’s page on なんて, and feel I still don’t grasp it.

but だって is one of those words that also remains pretty elusive.

It helped me to learn that this is basically the copula だ that comes after a noun at the end of a sentence, followed by the (indirect) quoting って.

This, だって I read along the lines of “When you talk about me”, setting “me” up as the topic that’s going to be commented on.

Maggie Sensei has a page on だって as well, in case it may help any.

Thanks! That helps a lot with interpreting the なんて panel. It’s tricky figuring out these words that have somewhat broad uses or, at least, definitely a cluster of uses that don’t exactly map onto an individual English word. I don’t get bothered at all by encountering grammar and words I don’t know, that’ll all come with time, but the one thing that does frustrate me in Japanese if it catches me at the wrong time is when I (to some degree) know everything going on in a sentence but can’t make any sense of it anyway, through some combination of the language’s high-context nature and/or the words not being used in the narrow English sense I’m mapping them onto. I know eventually you want to get away from translating everything, but I’ve been at this for 4 months, just making do with what I can now. But it’s those times when the faith gets a little shaken, y’know?

As for だって, thanks a lot, that’s the exact sort of information I was looking for. Hopefully applying that sort of logic when I encounter it in the future can help me figure out how to intuit it better.

I’ve seen those Maggie Sensei pages, I think, and I love all the detail she gives on these points, but sometimes it feels like such an exhausting list of all the ways that these grammar points can apply in different situations, and I find myself hoping that there’s somehow a more unified, singular way to orient my thinking towards these terms to make all of it make sense as a single word. In some cases that might be asking too much (I’m well aware how many English words I take for granted as intuitive that are actually used in dozens if not hundreds of technically different senses), but I always hope for it.

One thing I need a little help with, page… 9? I think?

If you are reading on Kindle, you can subtract 3 from the “location” to get the right page, if that helps. That carried over from the first volume, thankfully.

The same may be true for bookwalker, but I am not sure because I don’t use it.

Hey. I just finished reading the chapter, although it took me like 5 hours

… Thank god for the vocabulary list otherwise I’m not sure I would have been able to finish it. I have a lot of questions. I hope they aren’t too dumb, I had to look up almost everything up to make sense of the chapter.

When I was first starting out, I probably would have taken about as long for this amount of material. It’s really slow up front, but over time it’ll slowly get faster, little by little!

I hope they aren’t too dumb

No such question exists here!

Completely off topic, but can I just hire the noble Fritz to write a grammar book? I just learned so much I didn’t even realize I didn’t know. Truly what I aspire to be. Thank you for the enlightenment, dear gentleperson.

Thank you so much for the detailed answer.

I need to read it again since a lot of it just went past me, probably because it’s 1am over here x). I’ll read it again tomorrow and try to understand it better.

You should definitely write that book like Naytrib said

Looking forward to the rest of the story, it looks like it’ll be really fun and wholesome just like Takagi san !