She switched magazines to Coco Hana where she got a new serialization titled Polar Bear Café Today’s Special. They also published the older work under the name Polar Bear Café bis. I read through both series this year, that’s why I noted the difference above (it’s under the spoiler description).

The anime might be a little easier to follow than the manga, but the benefit of the manga is that each chapter is quite short. So those new to reading or watching native content can probably enjoy and learn from both of them.

Completely random but I just remembered making this post in the Aquatic Life Appreciation Thread 🐳 🐠 🐙 with my thoughts clearly being about Shirokuma-kun (from December last year)!

Real images/GIFs of Polar bears and cubs in the wild!

The Mods have had a look at this, so please don’t bring it up. It claims differently, but you really need to have a license to host anime content. You can’t just claim it’s “educational”. That’s not how “fair use” works.

This show is so cute and adorable. And the animals are all fun and goofy! XD

Panda-kun calling various job-ads is hilarious. He totes has no intention of working at all. XD

BTW: Not sure if you people noticed this, but Panda-mama

is voiced by seiyuu Toshiyuki Morikawa

The Hanami scene is lovely. Penguin-san getting tipsy and spilling his secrets adds to the fun.

I love Penguin-san as a character. Hiroshi Kamiya is perfect for the role! XD

Panda-kun insists Shirokuma-kun and Penguin-san visit him at the Zoo! I love the boke-tsukomi comedy in this series. Shirokuma-wanting to watch the polar bears diving. XD and so trying to get in un-noticed. Same with the seal-exhibit. There’s something about how he blatantly talks about wanting to eat the seals. Everything is so cute in this series - but that’s pretty brutal in its realism. Seals are the main food for polar bears, so I guess

Previously I’ve been able to find the subs for this series online via kitsunekko, although I’m unsure on the legal situation, I have seen others on the WK forums discussing and linking to them.

A few months ago I grabbed the subs for the first few episodes and tidied them up a little in a Google doc, which I printed out and went through the first ~20 minutes of the first episode writing down on the printout the readings used for all/most the Kanji, but I haven’t typed that up yet (it is sitting in front of me now, so wouldn’t be a lot of work to do so at some point).

@ekg Please LMK if you want me to modify / remove this comment, or if you’re happy for me to link / share.

Well, to shed some light on the issue of subs - from what I know - essentially the official subs of a show are also copyrighted content though separate from the show usually. Fansubs are not (well, they are the copyright of the fansub group). So, basically fansubs are legal to download and add to video content you own legally. But, disseminating the official subs is also a kind of copyright infrigement, as far as I know.

Though, it’s really not up to me to decide on these things. The Mods are looking at this thread, and taking action when needed, so we’ll just have to comply with the forum quidelines as with all threads on this forum.

especially the last bit " * Before you post, make sure that everything is legal. We don’t want anything illegal to be shared on the forum, like illegal manga, shows, learning resources, etc. Any illegal activities will not be tolerated."

I hope this answers your questions. I can’t say I know kitsunekko.

FWIW it looks like Tofugu link to Kitsunekko from their blog

EDIT: to clarify, I only found this link from Tofugu after first post.

I guess, then it’s fine.

Awesome, in that case the Japanese subtitles for Shirokuma cafe can be found on kitsunekko. I think my files are based on the Kamigami versions (further down page).

These subs are meant for machine consumption, at some point in the past I threw together a script to
process these into a slightly nicer format (stripping out all the timing info and guff) and put them into Google docs.

If people find these useful I still have the script to make more of them, although the script just outputs one line per line, the left/right justify is done by hand. No guarantees on accuracy of course.

I love Panda-kun’s honesty during the interviews. Also, where can I get a job like that"

Panda-kun picking up work ad magazines at the コンビニ: which of these show jobs doesn’t require any work?

Also, best not forget that Panda-kun is voiced by Jun Fukuyama and Shirokuma-kun by Takahiro Sakurai - both big name actors as well.

This show has got an amazing cast really!

Currently up to episode 4, and enjoying it so far! Not sure who my favourite is yet though toomanycuteanimals

Turns out they are, but you’ll pretty much never see だいくまねこ outside of scientific stuff, so best to only use パンダ.

I’m still a novice at interpreting Wikipedia in Japanese, but there seems to be some kanji associated with Llamas, though they get no hits on Jisho. 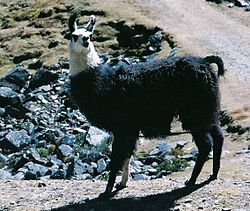 In any case, as you say, with a lot of animals you use kana and often katakana rather than kanji. I guess, they’re mostly seen in a science, biology context.

btw: Shirokuma-kun lost me when he started to give his “problems” to Penguin-san (episode 3? I think) Well, the first one was pretty straightforward (about T-intersections), the second on though: what was that about?

羊駝 seems to be used for Alpacas too, and 駱馬 looks like it could be more specifically Llama. But I’m not super sure. It’s kinda difficult finding these out as the kanji names are usually also the Chinese names so googling just comes up with Chinese results.

btw: Shirokuma-kun lost me when he started to give his “problems” to Penguin-san (episode 3? I think) Well, the first one was pretty straightforward (about T-intersections), the second on though: what was that about?

His constant puns are kinda hard to keep up with.

His constant puns are kinda hard to keep up with.

They are! it’s good listening practice though! And you always pick up on a couple of new words from them. ^^ (this is the third time I had to look up Gecko やもり - hopefully I’ll learn it this time?)

I’m picturing the reverse now and that one creepy Kira pic (the black and white hair), and it edited to be Panda Mama…

I started in on episode 4 today, a bit ahead of the schedule I know, but I needed my dosage of cute and funny animals.