I’m back! And I seem to be struggling with something only because of a few really weird example use cases I encountered with it.
I know that ある is a verb that expresses existence of things (of which are inanimate).
In Genki, they explain it as “X が あります” // “There is/are X”.
This is easy enough to grasp… You are declaring (or maybe asking if) something does/doesn’t exist.

But then it started to get weird… Apparently this can be used to declare ownership of something?
I can’t fully wrap my heard around it.
テレビがあります = I own/have a TV
I would have read that as “there is a TV” based on how I was taught what ある"means".

Things got even more discouraging when I saw this example in lesson 4 practice…
(Context was you, the reader, are being asked a question, answer the question)
あなたの国に何がありますか
I can’t even fully translate what this means!! Your country what there is? (maybe it could be interpreted as ‘what is there’).

I spent quite a while today trying to better understand what ある truly means, but from what I could find, it seems that it doesn’t have a clear cut EN definition. It’s apparently one of those words that is kind of all over the place if I read correctly.

Do you have any useful insights to better explain the meaning of ある or how to more accurately interpret it other than just “there is”?

Thanks again as always, WK community.

“To have” and “to exist” are both definitions for it there.

To me I would translate that as, “what does your country have?” (or I guess it could be more like “what is there in your country”)

This can be explained with what you mentioned before, tho.

And it becomes: What is there in your country?

As, is there anything interesting or different your country has?

Whether it is “have” or “there is” is based on context.

I have a TV. There is a TV in the living room. Etc.

This makes more sense… I guess I may have overlooked the use of both the が and に particles in this case…
Regarding に so far I only know it for “location of existence”, “goal of destination”, and “time reference”.

The subject would be “what is there”, this make sense.
I guess we could apply the location of existence here for that ni particle.
The existence being “what” (we don’t know yet, listener will reply with this info)
The location being “your country”

I’m no expert, but a level or two ago Wanikani taught me the kanji for “have” - 有. So I first encountered this via kanji, as 有る, which is said ある. I immediately suspected that this is something you’d probably see as all hiragana more often than kanji (don’t know if that’s true, just guessing). So for me, “to have” was the default meaning of this word, while “to exist” was also listed. I haven’t had much of a chance to get confused by the nuance in meaning because I haven’t been studying much of anything outside Wanikani for now. Not sure if it’s a great idea or not, but since I’m pretty busy at the moment and Wanikani just feeds you the kanji and the vocab so easily, I’ve been using Wanikani to build up my vocab and once I finish the project that’s taking up my time sometime this spring, I’ll look into more grammar resources so I can start to piece together the vocab I know from Wanikani.

This is just a difference between English and Japanese. In English, you have things. In Japanese, things exist. This is the case for いる as well. In English, we say “I have an older sister”. But in Japanese, we say 「姉がいます」.

I’m sure what I said doesn’t apply to everything of course. I’m mostly talking about comparing “have” with ある and いる.

This is a perfect example of why it’s often easier to understand something in that given language than it is to translate in your language.

My students are often troubled when they’re learning English and they learn that “I have ~” is often the correct translation of ある/いる (ex: I have a brother) when they learn 持つ means the same thing except a different nuance.

“ある” is often translated as “to have” or “there is/are” given the context.

Looking at your specific example, you should get a gist of the meaning by breaking down the parts.

Once you grasp the basics of Japanese grammar and how it works, you’ll worry less about translating. For now, keep the questions coming when you get stuck!

Thank you for your reply!

I feel like my questions can be “dumb” sometimes but I try to swallow my pride and just ask, even if it may be obvious.

I actually find with some more basic sentences you can basically guess what they’re saying sometimes as long as you understand the important particles like か for example and the words in between the particles.

I guess we could apply the location of existence here for that ni particle.

Just to expand on this a little so you don’t get confused yet again further down the road: I’d say に more generally marks the ‘context of existence’ for such verbs. You’ll probably encounter stuff like 私に家族がいます・仕事があります at some point. It’s pretty clear that 私 is not a location at all, but the sentence is still completely valid. Honestly, much of the time, に feels like a particle that ‘points’ to something, so you could see に as ‘assigning’ some existing person or object to a particular location, person or thing, turning that into the ‘context/domain of existence’.

PS: I’m honestly wondering if the problem is just that your textbook didn’t supply enough examples using に with ある, because in most basic examples, に gets translated as ‘in’, and simply inverting the letters of ‘in’ gives you ‘ni’, so I thought that would be the first intuitive interpretation one would have of the particle, even if that’s an incomplete way of understanding it.

When I started learning about ある and いる, I usually tried to combine them with some sort of simple context to understand the switch from “having things” to “things being in my possession” better. Sentences like:
私は兄弟がいません。
and
私は質問があります。
Now it’s a little easier, but there are some sentences I still find tricky, especially when counters are involved.

I didn’t see it being mentioned here yet, but ある actually has at least one other role which I learned from ももたろう:
むかし、 むかし、 ある ところ に
おじいさん と おばあさん が いました。
A long, long time ago, in some place there was an old man and an old woman.
I know the text of ももたろう is fairly archaic, but I’ve seen this construct with ある elsewhere, too.

EDIT: Unless it’s a completely different ある and the overuse of Hiragana in the text makes it confusing.

Yes, I think you accidentally left 「いました」in there, because I believe the original text uses ありました. You can also occasionally find such constructions in NHK news articles. The difference between the two verbs when they’re applied to people (it’s been a while since I’ve analysed them, so I may not be completely right) is that いる tends to suggest activity and living in general, whereas ある focuses on existence. There was an NHK article a few months ago involving a train accident which said something like casualties「ありませんでした」i.e. there were no casualties. Whether or not they were ‘actively present’ on that train doesn’t matter here.

Random additional knowledge that’s frankly almost useless in modern Japanese:
There are also two kanji used for ある, which are 在る and 有る. 有る is generally used to express whether or not something is in someone’s possession or if it really does exist. 在る is used when existence in a particular state or location is the focus. Thus, for example, in the original text of 桃太郎, the kanji used is 有 (fifth column from the right): 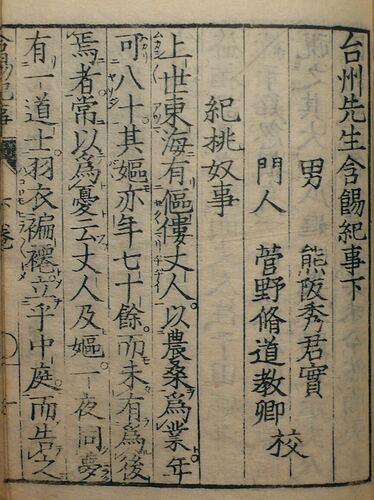 865×1155 166 KB
(I’m no kanbun expert, but I speak Chinese and I know enough Classical Chinese to know what some of the sentences mean, even if I don’t know how a Japanese person would read them using kanbun rules.) The fact that the elderly couple lived/existed in ‘a certain place’ (あるところ) might make one think 在 is the right kanji to use, but since these characters are being introduced for the first time, it’s far more important to establish the fact that they exist in the first place, which would be done with 有.
1 Like
Iinchou January 31, 2021, 7:28pm #12

Yes, I think you accidentally left 「いました」in there, because I believe the original text uses ありました.

I got this text from here: http://life.ou.edu/stories/
It’s mostly in Hiragana, but looking at the actual original text you posted, I see it should’ve looked entirely differently ^^".

There was an NHK article a few months ago involving a train accident which said something like casualties「ありませんでした」i.e. there were no casualties. Whether or not they were ‘actively present’ on that train doesn’t matter here.

Would this though not also suggest that the casualties were ‘inanimate’? Like bodies, for instance? I vaguely remember 有る being used to refer to dead bodies in a lesson I did.

Useless or not, that’s suuper interesting! Thank you so much for sharing!

I got this text from here: Japanese Stories
It’s mostly in Hiragana, but looking at the actual original text you posted, I see it should’ve looked entirely differently ^^".

I mean, perhaps I was wrong, but I think the first lines of 桃太郎 in Modern Japanese are quite frequently quoted, especially when the use of ある for people is being discussed. That sentence appears in dictionaries as I quoted it.

Would this though not also suggest that the casualties were ‘inanimate’? Like bodies, for instance? I vaguely remember 有る being used to refer to dead bodies in a lesson I did.

I don’t think so. After all, 桃太郎’s elderly couple clearly continues living their lives. Also, since, like I said, いる tends to emphasise the animate character of those concerned, the more I looked at that sentence (it’s somewhere on these forums, because someone asked about it. I believe I commented on that thread, which might well be ‘Short Grammar Questions’), the more I felt いる might have sounded wrong. For example, it might have suggested, instead, that casualties were not ‘present’ in the same way students might be ‘present’ for class, as though they were already injured and could have decided whether or not to turn up on the train. Even if it wasn’t wrong (since I might be splitting hairs), the main idea is this: ある calls attention to the question of existence alone – possibly in a certain state – when it’s used for people. Whether or not those people are animate doesn’t matter because the verb doesn’t cover that, and they’re assumed, of course, to be animate by default.