Well, I did have my first burns yesterday - a really nice feeling overall.

Only 2000 items left in the Enlightened pile to go.

I was watching a favorite anime with the subtitles off, and there was a dialog I almost completely understood, except for one word はいちゃく, so I decided to look it up.
From the context, I had a feeling about which Kanji it would use, but when I looked it up in a dictionary using hiragana, it didn’t come up. I forced it to use the suspected Kanji (I had to scroll down in the options a bit), and lo and behold: 敗着: The move that costs a go/shogi player the game. (Not a common word). The anime is about a shogi player.
.
.
.
FYI: yes, the show was ３月のライオン, and I’ve started a book club for the manga.

I’ve finally broken my 400some day streak, and after I move into my new place I’m going to reset back to level 1 even though I have 1800 burned items

Sometimes a step back to reevaluate is a pretty great achievement 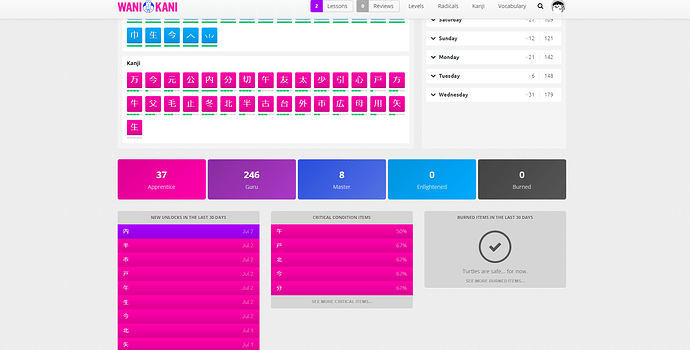 I got my first Kanji to master the other day! Feel pretty proud of that!

I was just about to say! ^>^ (I never got fully started on it, but your comments makes me realize I really need to re-evaluate my priorities in life!

Wait how did you not make a level 60 thread!? When I get to level 60 I’m going to tell everyone how beautiful, amazing, funny, and smart I am in my level 60 thread and people are going to forced to to give me likes anyways. I can’t imagine getting to level 60 and not doing that

I got my first burn items last week! In the last few days I’ve also managed to start doing reviews regularly again after falling off the wagon for about a month, so it’s great timing for my burns to begin now so I have that little bit extra motivation

Hey hey, congrats! I also just got my very first burns. 22 of the level 1 radicals. Unfortunately I messed one up and it went down to guru… it was the ‘fins’ radical. I saw it and my head immediately went ‘eight’, as if it was a kanji. You know those times when you notice your mistake as you’re pressing enter, but its too late to stop? Yea…

But it’s cool I guess, I’m bound to mess up a burn item sooner or later. Though thinking about it taking another ~6 months for my next chance at burning is kinda frustrating

I still like to view it as an ‘achievement’ though

Finally got some items into the “Enlightened” category. Still a ways to go to the burns and I still managed to mess up some of those early radicals anyway. I do know the feel about misinterpreting radicals as kanji, though - I mixed up “ten” with “cross”, so that’s one’s back to Guru.

Cross is actually one of the radicals that I messed up at some point as well (mistaking it for ‘ten’, same as you). So that burn is still a few days (weeks?) away.

I bet that’s a pretty common mistake actually. I wonder if there is some kind of statistic about which items have the highest % fail rate. Would be interesting to look at

I used to clear radicals, kanji, then vocab (because I unknowingly reordered them) but unlocking 100 vocab all at once felt like overkill. So for lvl 6 I’m gonna make the ratio of vocab to kanji higher and still get a 0/0 streak!

Looks like my community board lvl number hasn’t updated yet, but I unlocked level 31 yesterday evening! Halfway there!

I’ve finally gotten into a good flow of not abusing the reorder script… and somehow I’m actually keeping ontop of all my lessons and it’s not becoming too overwhelming! It become too often an occurrence where I’d priotisie kanji and leave vocab to pile up into the hundreds, then I’d spend weeks arduously whittling through them.

There’s less than 10 levels left for me now, shame it took this long to get into the groove heh

My apprentice count is finally less than 200!

In April it was scary high

Look at those gurus too! Lovely!

Yes, I love it so much. I’m watching it for the third time, and I totally just splurged on the full set of manga. I suffer from depression, so it feels really relevant. Also, the language is beautiful. It also got me curious about shougi, so now it’s my go-to kill time game (app).