I can’t really find any info regarding this but I’d just thought I’d ask for clarification:

One of my N3 friends said learning the stroke order of kanji is very important to writing kanji, as not properly writing it in the stroke order either could make the kanji come out wrong or change the meaning of the kanji (Something like that, I don’t know). However, when it comes to Tofugu, the website says that if you learn radicals, you can basically draw the radicals associated with each kanji and it’s alot faster to use radicals to draw kanji rather than the stroke order. However, my N3 friend also says radicals are only useful for searching kanji, otherwise it’s a waste of time.

So I’d like some feedback and opinions as well as clarification on this topic. Which side is correct on this? Is it better to use radicals to draw kanji or do you absolutely have to learn the stroke order? Which way do you guys write your kanji, for those of you in N3 - N2? Radicals or stroke order? Help me out here lol.

The term “radical”, if I remember correctly, only actually refers to one of the components in each kanji, which is why I use the term “component” instead.

Wanikani’s radicals don’t always match 100% with the radical shown in the kanji, so you still have to do a bit of memorization on top of that. For example, the ネ radical in 初 has an extra stroke. But overall, I think it’s still easier to memorize kanji by radicals instead of strokes.

If you plan on writing, then you need to know the stroke order. The details that result from how you move the pen are what make the kanji recognizable to Japanese people. Knowing the stroke order can also help you read very stylized cursive writing.

With all that said, I am not personally memorizing stroke order because I just read printed text and have no intentions of handwriting.

Is it better to use radicals to draw kanji or do you absolutely have to learn the stroke order?

Disclaimer Not A Kanji Expert … but in my (limited) experience correct stroke order usually means drawing each radical. So it’s not really an either-or question.

It’s worth learning at least the basic patterns because dictionaries like Jisho have an option to look up a kanji by drawing it. And (IME anyway) they’re surprisingly forgiving of sloppy writing if you have the right order and number (squares are three lines, not four!)

It’s worth learning at least the basic patterns because dictionaries like Jisho have an option to look up a kanji by drawing it. And (IME anyway) they’re surprisingly forgiving of sloppy writing if you have the right order and number (squares are three lines, not four!)

You make a good point. These electric dictionaries also have a method to look up kanji using traditional radicals, and the radicals are usually organized by number of strokes. 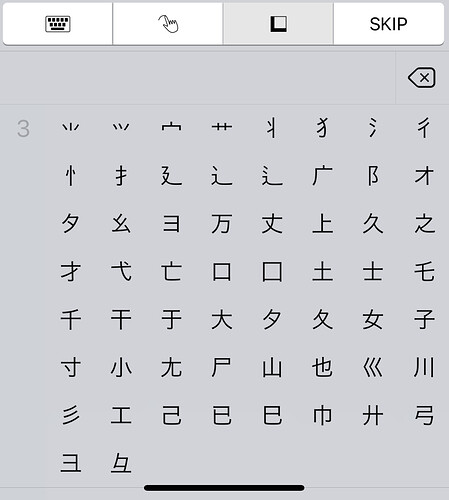 Someone not familiar with basic stroke order rules might not understand why many radicals are categorized as they are. For example these 3 stroke radicals: 口, 尸, 夂, 山.

There’s actually a Tofugu article about how to questimate stroke order for kanji (I see it’s been linked to already). So, while not strictly correct, it might suffice for most if not all your needs to write kanji - unless you’re in a line of work requiring a lot of handwriting of Japanese.

Then, going the proper route seems worth the effort (rote learning of individual kanji stroke order). Otherwise, I’d say no: just learn the general principles of order, and that should be plenty.

I am not sure how it works in Japanese, but in Chinese there were certain rules about the stroke order that made it so you didn’t have to memorise the stroke order for every word. Once you get used to it (doesn’t take long, few weeks to internalise maybe), you’ll do the majority of new characters the right way without seeing stroke order, and the minority that deviates is done wrong by many native speakers as well (bad excuse to do it wrong yourself, but ah well…). Thus it is important to learn stroke order rules! Not the stroke order of individual characters so much.

A quick google shows a guide on the rules for Japanese here on Tofugu: Kanji Stroke Order: How to Guess it Every Time, that seems to be similar to the Chinese rules.

Stroke orders also very much follow radicals (though not always exactly…). But be aware here that what Wanikani calls radicals is not exactly the same as the established radical sets! It’s more akin to what is traditionally called components.

The majority of Chinese characters are so-called picto-phonetic characters, that have 1 or 2, sometimes even 3 radicals that say something about the meaning, and then another radical to give the pronunciation (a reading radical, as you might say). As I just started Wanikani and learning hanzi, I can’t say if it’s the same with on’yomi readings of hanzi or if it has changed too much over time. Actually, Ilooked it up, 61 of jouyou kanji is of the ‘semantic-phonetic type’: 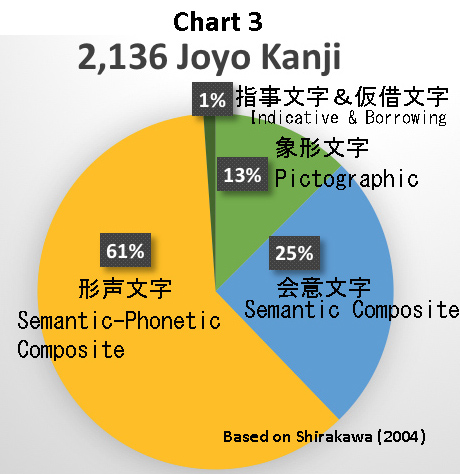 Radicals are written with normally 1-3 components. In general use you find roughly 500 components with Chinese characters, not sure about the kanzi. There’s about 200 radicals that make up nearly all characters, of which you already get very far if you know the 100 most frequent radicals.

Radicals are often indexed, as they are used for dictionaries, making fonts, etc.
In Japan a more expansive set of 214 and a base set of 74 radicals is normally used. If you know the stroke order of the base 74 radicals (of which only 49 are used in the jouyou kanji, in case you stick to them for now), you will get VERY far in writing the stroke order of all kanzi properly. I’ll bet a keg on that. Knowing those 74 radicals also allows full use of some dictionaries (others use the more expansive set of 214 radicals).

Components don’t really have such official indexes, and what wanikani calls radicals is in reality a proprietary set of components and not radicals. Wanikani is teaching the reading of kanji, and has specifically designed their unique index of components for it (which they call radicals). That is great for learning to read the kanji, but is not an ideal basis for learning other things like writing and stroke order.

So if you want to move beyond wanikani, and learn stroke order as well as other things:

Disclaimer Not A Kanji Expert … but in my (limited) experience correct stroke order usually means drawing each radical. So it’s not really an either-or question.

The main exception is the 口 radical, for example in 図 or 国 - the rule there is you start drawing the box, draw the contents, then close the box.

If you’re writing slowly the way most learners write kanji, it probably doesn’t matter almost at all for your own writing.

It becomes absolutely critical if you start to write quickly with slurred shapes, because those will be very difficult for anyone to read if the stroke order was strange.

When reading native handwriting, knowledge of stroke order can help you not be confused by their hastily written, messy kanji as well.

These are very interesting explanations and answers. Thank you everyone, it is much appreciated