Hello all, sorry if this was brought up before, but I couldn’t find anything.

When I started learning Japanese we were always told that stroke order is quite important for readablity. After all, when you write quickly you don’t just make neat individual strokes like a printer, your pen might not fully leave the paper between strokes and create extra squiggles （い、き、け、さ for some easy examples I guess). And I wanna write pretty (or at least legible haha). But also, knowing the stroke order makes it easier to read other people’s handwriting, because you know where those little extra squiggles come from.

Hence why I’m mildy concerned about possibly memorising the wrong writing ways. I understand that the ‘radicals’ of Wanikani are more to be seen as ‘components’, and since I’ve not been able to actually study any kanji yet I don’t know how much emphasis is put on “remember, 母 is made up of 日!”, but that does seem to be one of the major selling points?
So far I’ve definitely made use of recognising kanji I already learned as part of new kanji, so if there’s a 日 present, great, I already know how to write that! But if I now memorised that 母 was comprised of 日… well, that’s one entire stroke extra, for a start. Plus looking completely different (aside from vaguely square with a dash through).

Did wonder if maybe it’s still officially considered the same radical, so I tried to look up 母 with Jisho’s radical search using 日, with no results. So… for that purpose those ‘radicals’ also seem rather pointless.

So… Basically I’m unsure whether Wanikani would be useful to me. I really like the idea of studying kanji in order of complexity, being able to recognise parts you already know in newer ones. But I really really don’t want to ‘spoil’ my handwriting with incorrect associations. Since there doesn’t seem to be a way to skip ahead, could y’all tell me how much the radicals are brought up in kanji study or if I can just ignore them? (Once having passed all the radical quizzes lol.)

The short of it is, WK is not a writing practice app. But doesn’t 母 use the ‘windows’ radical? If you saw it on the 日 page, maybe that is a mistake that the team needs to look at. In that case, best way would be to email info@wanikani.com, or use the chat button on the Dashboard when it’s active.

Since there doesn’t seem to be a way to skip ahead, could y’all tell me how much the radicals are brought up in kanji study or if I can just ignore them? (Once having passed all the radical quizzes lol.)

You mean kanji study within WK, or outside of it? Within WK they’re used for the mnemonics.

Thanks for the reply

Yeah, I presume for just reading/recognising kanji any sort of ‘looks vaguely similar’ can be helpful. I’d be happy tofocus on reading with Wanikani, I was planning on using another app for writing practice as well. But if I’m learning something that’s actively wrong that’d be even worse than just not learning it at all. (Harder to unlearn something than to learn something new I find.)

(Jisho lists 毋 as one of the parts for 母, is that ‘windows’?)

So your guess is it might just be a mistake? Or you figure it’s meant to be after all? Seems quite an unlikely mistake, given it’s the very first set of radicals.

Yeah I meant within Wanikani. To give me an idea whether I should bother continue using it at all, or whether it’s maybe not for me. Is it possible to ignore the mnemonics? Or are there quizzes on those too?

(Jisho lists 毋 as one of the parts for 母, is that ‘windows’?)

Yes, it is. You will notice that 毋 also does not have the same stroke order as 母, by virtue of one of the strokes not even existing, so I find WK’s choice to use the 日 radical instead due to its larger visual similarity pragmatic and understandable.

If I understand correctly 毋 is the simplified version of 母 when used as a component of kanji. The pre-simplified kanji use 母 as the component.

毋 and 母 do have the same overall… structure though. Yeah, the centre stroke is either one through or divided, but either way, same stroke order.
I’ve seen 海 written with both 毋 and 母. Which is kinda what I mean by ‘weird continues squiggles’. (Wildly guessing here, but seems possible:) Maybe the original writing was with 母 but over time it merged into 毋?

Ohhh, that’s interesting! Makes sense! Is that the same simplification that Chinese used or Japanese specific?

It’s true that sometimes radicals used on WK are approximations for the sake of recognition. I find that you get a sense of when it differs pretty easily, so I’m not learning anything “wrong”, exactly. That said, handwriting is not a major focus for me, so I can see why your opinion may differ.

If you like, you can install a script that displays stroke order for you to solidify that in your head right away and prevent any misconceptions. I use an Android app called Flaming Durtles that has that option built in. Here’s what it looks like: 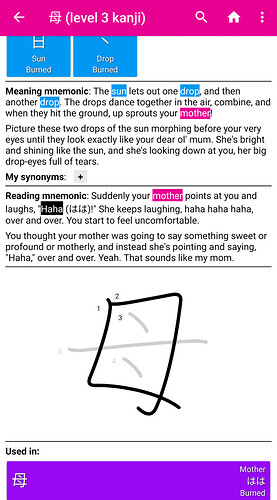 (It loops an animation of the strokes in order

Yeah I meant within Wanikani. To give me an idea whether I should bother continue using it at all, or whether it’s maybe not for me. Is it possible to ignore the mnemonics? Or are there quizzes on those too?

There won’t be a lot of this happening in the rest of the program. I don’t really use the mnemonics, myself. You won’t be quizzed on the mnemonics themselves. 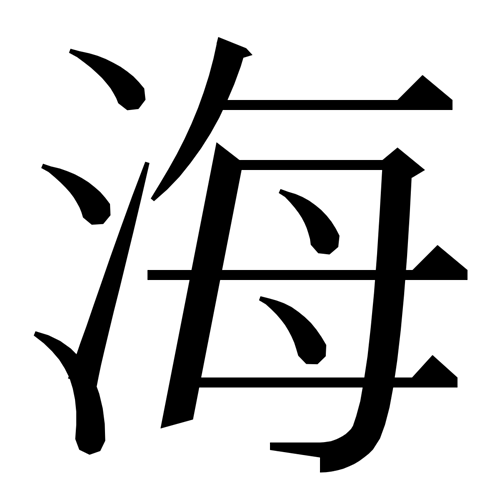 Looks like the Chinese do not simplify this one.

It’s actually a very conservative simplification. The only difference is you don’t pick up your pen between the two “drops,” but the horizontal stroke still comes last. I imagine in handwriting the difference is often indiscernible.

Chinese and Japanese use different simplified hanzi/kanji in principle, although sometimes they both end up with the same characters. See Differences between Shinjitai and Simplified characters - Wikipedia for an overview.

And to me, 母 and 日 really do look structurally similar, except one of them is a bit bent out of shape. WaniKani is aimed at people who do not know about the history of kanji simplification.

You may disagree with this choice but I argue that it was made deliberately and for good reasons. It’s not a mistake.

@Jamuko Huh, would’ve thought stroke order was introduced with each kanji by default XD Good to know, thank you for the recommendation!

@Saida Ok, great! I guess then I can continue using Wanikani

@anon8142279 Oh yeah, I can see how it can be useful just to recognise the kanji. Don’t remember any strong disclaimers that Wanikani is only about reading, but that is the general gist I was getting anyway. Which is perfectly fine! I don’t expect a page/app to do absolutely everything haha.
It just seems a bit of an odd choice to include things that might help with reading (in the short term at least), but might make writing more difficult. Maybe not everybody also wants to learn handwriting in the age of smartphones, but I’d presume I’m not the only one who does.
Plus as said, better understanding strokes can also help with reading other people’s handwriting/fancy handwriting style print (or just different fonts). So especially for people who don’t (yet) know about kanji simplification that would be useful. I was certainly quite confused when I first found 海 with two seperate dots, until I noticed that, oh yeah, that makes sense if you just write it quickly.
I’m aware that Wanikani made up some radicals/changed their names, which is fine by me. Would be nice if they were more useful for dictionary lookup, but oh well. It’s just when actual existing radicals/kanji being claimed as part of a kanji that they’re just… not a part of. Maybe useful for quick reading progress, but will need to be unlearned for dictionary lookup/writing.

It is not, because WaniKani is intended for reading kanji and built under the assumption that most people don’t do handwriting these days anyway. That’s pretty clearly stated on the “About” page, I think.

Heads up: WK’s radicals deviate from the “canonical” ones you’ll find on jisho.org and similar sites by a significant amount, both in their names and in what even is considered a radical.

WK’s radicals deviate from the “canonical” ones you’ll find on jisho.org and similar sites by a significant amount

And the air quotes there are appropriate, because the database that Jisho uses is far from authoritative. Occasionally people will ask questions on Stack Exchange about why the kanji are broken down in certain ways on Jisho, and kanji experts there will be generally perplexed at the breakdown. At least in WK’s defense, they’re not trying to claim that it’s a “true” representation of the history of the kanji.

If you are interested in Stroke Order the script Item Inspector shows the stroke order for most Wanikani radicals thanks to the Kanji Stroke order font it uses. You open the popup for the radical and move the mouse over the large colored item at the top of the popup. The stroke order will show up. 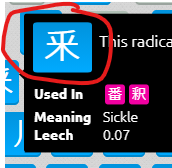 This will show up. 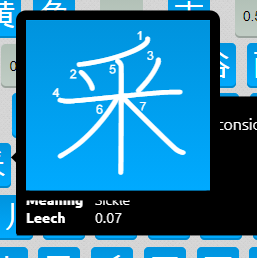 There is a couple dozen radicals for which there is not Stroke Order font so there Item inspector can’t display the stroke order for these radicals. The leaves over 400 radicals with stroke order.

Disclosure: I am the author of Item Inspector.

Of course, in the case in question, this would potentially lead to a wrong conclusion of how to write 母, where you’d end up writing it with 日’s extra bottom stroke.

There are also scripts that add handwriting information to your item pages, like: [Userscript] An Unobtrusive Kanji Stroke Order. There is also one that shows handwriting info in review pages, I think.

Just installed Item Inspector a an hour ago, it really seems to be very useful in many ways! Thank you kindly for your great work!

There are also scripts that add handwriting information to your item pages, like: [Userscript] An Unobtrusive Kanji Stroke Order. There is also one that shows handwriting info in review pages, I think.

Why that’s not unfortunate at all in this case! Would be more of an issue if ‘radicals’ were included and their stroke order didn’t match up with the kanji ^^