Has anyone else found the mnemonics and the radical combinations in level 9 not stacking up to the quality of those in past levels?

Take for example 和 (peace, Japanese style) and 乗 (ride). Both of these are taught with the radicals for ‘grain’ and ‘mouth’, yet 乗 doesn’t seem to actually have the mouth radical in it according to the kanji dictionaries I’ve referred to, and although there are some strokes that intersect in a square, they don’t even resemble the mouth radical. Now I’ve got two different kanji to memorize, both using a story about a grain and a mouth, even though one of those kanji seemingly has no mouth in it.

Which brings us to the mnemonics, which normally help to disambiguate kanji with similar radicals. For ‘peace’, we have: ‘When everyone has grain in their mouth, you will have peace. That is the Japanese style of doing things.’ This is less of a mnemonic and more of a sentence that just happens to have the words from the definitions in it. Same for the reading mnemonic: ‘Peace is the Japanese style. The walruses (わ) living off of Japan see this, and start to emulate.’ Past levels’ mnemonics have been either hilarious, or logical, or at least bizarre enough to stick. But here we basically just have walruses eating some grain → peace.

(Aside: yes, I know I could be writing my own mnemonics when the provided ones don’t land for me, but part of the reason for paying for a learning service is to offload some of that labour. I barely have enough time for WK as it is, unfortunately.)

But even the emails for completing level 7 and 8 are incredibly lacklustre in comparison to the emails you get for completing 1–6. (And I understand those emails must take a lot to write, especially given the need to write sixty of them.) Those emails encouraged me so much up to level 6, but for the past couple levels it’s felt like, ‘Yeah ok, ya did it. Get on with it.’

I don’t mean this post to be me taking a big dump on WK, because I’ve been enjoying the hell out of it for the past 8 levels — and that’s what’s got me so perplexed in level 9. I feel like all of a sudden I’m using a different product from the one I was enjoying so much before. And just to be clear, I have been absolutely loving WK up to this point. And to be fair, there are some very abstract concepts here, for which almost any mnemonic would be nigh on impossible to write (like 物, ‘thing’). So I get it, this is not easy work on the writers’ part.

So, after all this griping, what I’m wondering is… am I totally off base? If I’m not, does it get better? OR… is this maybe just part of higher levels bringing more abstract kanji that are naturally harder to write good mnemonics for? Do I just need to have a snack and a nap and stop whining?

I didn’t have any issues with that level in particular but it was so long ago I don’t really remember.

I can see how they could get grain+mouth for 乗 but it’s definitely something that’s unique to WK.

But I wouldn’t dwell on it too much. The vocab for those kanji are common enough that it’s not worth worrying about.

Fair enough, and good to know — thanks! I also understand that much of this just comes down to hardcore memorization, and if the mnemonics don’t stick, me bombing the reviews will eventually make it happen.

if the mnemonics don’t stick, me bombing the reviews will eventually make it happen

Aye that happens a lot lol. But also, the mnemonics are only there to get you started. I’ve found that once items hit enlightened or burned I have to struggle to remember the mnemonic but the meaning/reading comes easily.

Haha, so true! I’ve hit ‘enlightened’ on some and spent ten minutes trying to recall the mnemonic after being surprised to recall the reading/meaning right away

I guess I’ve just found that I was able to get started with a lot less struggle in past levels thanks to the mnemonics; maybe I just need to change my strategy up a bit now.

There is also always the option of making your own mnemonic for items when you feel like the WK one, just doesn’t work for you - for any reason. I’ve made lots of mnemonics in my notes during lessons. Sometimes I just have a different idea about how I wanna remember an item. Or I don’t get the cultural reference.

In the end, like @alo says, it comes down to the SRS and when you get to burning the item, you won’t be using the mnemonic anymore. ^^;

So, don’t think too hard on it. I’m sure you’ll get through lv 9 fine!

Ive never bothered with their stories. Its too much information and makes it harder for me overall. But, yeah, I do wish the radicals matched up a bit more. What you should watch for and I try to do each level is to make sure the Kanji mean what they say they do. Most of the time they do but from time to time the meaning is either off or blatantly wrong… When its off its usually because theyre choosing a word that encompasses the most meanings possible and ew. I dont like when they do that so I choose a few of the things it means to memorize instead.

The mnemonics are hit or miss for sure. I think that’s something you can expect more of in the following levels, not less. They do their best to help you, but in the end how you memorize it is on you. I’d say the service you pay for from WK is much more the SRS as opposed to the mnemonics.

I usually memorize kanji based off of my first impression of it, as opposed to the radicals that make it up. So I might see that half of a kanji is taken straight from this other kanji, so I’ll use that in my mnemonic instead of thinking of it as a group of radicals. After a certain point all the mnemonics made by just listing the radicals and making a story start to all sound the same (though that does work for a lot of people). I wouldn’t say that making your own mnemonics takes that much more time, though. I just kind of stare at them until I think of something. Eventually SRS makes it stick.

Oh, and in terms of the emails. They’ll get progressively shorter as you go on. Sneak peak of level 47 for you: 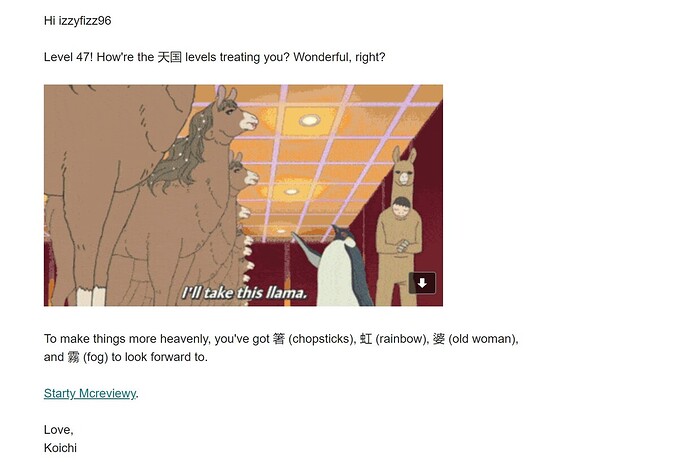 Sometimes the mnemonics are so dumb, they stick in your head for that very reason.

For the most part it hasn’t really bothered me, but when I got to the whole “Uk Aga” thing for 伺 I felt super irritated at how lazy it felt. But then, I haven’t missed it so far so…

I actually started ignoring a lot of the mnemonics when I felt they’re too bizarre and have nothing to do with the kanji and started building my own based on the first connotation that comes to my head when looking at a given kanji. Sometimes I use words I already knew before starting WaniKani as reference.

I know it might get progressively harder, but I would still prefer if the explanation was more tied to the kanji itself, because in many cases it does work

Like the others said, the memnonics are only really there to help you through apprentice, and maybe in rare cases Guru. I can’t remember most mnemonics for even for Guru 2 levels.

This, in large part, is due to many memnoics being so similar and being more composed of phonetic components rather than being pictograms/ideograms/compound ideograms. Interestingly, this tends to make the reading easier for later levels, while the meaning is harder. This is typically the opposite of later levels.

With WK, you have to take the radicals they give us with some leeway for interpretation. I don’t think the radicals always necessarily equate to the accepted radicals in a Kanji - they want us to remember the kanji not necessarily know how to find it in a dictionary or understand/accept the etymology.

Would it be nice to only get officially accepted radicals and kanji mnemonics use only those that are in it, not also ones that look like they are in the kanji, sure. Might have to unlearn some radicals in a kanji because of this but I’d rather know the kanji now and worry about it later. But that is me, not you.

I read this post before going to bed and felt the 和 kanji mnemonic has been a pretty good mnemonic for me because it’s easy to think of making peace by feeding people, and the image of walrus with food in their mouth is fairly memorable to me, at least.

But then this morning I had a level 9 vocab lesson for 要る (いる): “… think about what you are going to need… like, what you’re really going to need, more than anything. Then, think of an eagle, because you really need an eagle. You’ll need to come up with the reason why you need an eagle though, so hopefully it’s’ a good one.”
Thanks Wanikani. At least this is one of those “this is so bad it makes me a little mad and I can use that emotion to help remember it” mnemonics. It’s not so bad if it’s every now and then.

The eagle mnemonic is one of the better ones since it’s consistent across all of Wanikani for that い sound. Honestly, by the end, that eagle has seen some stuff. It’s done some things.

I don’t even question it anymore. 尉 = Flag+jackhammer+measurement? Military Officer with an eagle on his head

Thanks for all the feedback and advice, everyone! It sounds like I’m just going to have to make some more time/effort to come up with my own mnemonics and stories when the provided ones don’t stick. Or, as has been repeated, just let the reviews drill it in, even if it means bombing a little more initially than I have been up til now.

On a side note, I actually love the stories with the continuing characters, like the eagle. That eagle is a dick. Except for when he saved me from the lion.

That reminds of me another level 9 ‘wtf’ moment — the story for 客 (guest, customer) is about someone named Kyaku, who is literally just ‘an ordinary customer’. I got so irritated over this one — what happened to the characters like Jourm and Mrs Chou and Ken, you know? Those characters are awesome, but this Kyaku is just some perfectly normal customer, with no distinct features or background, and no indication that we’ll ever hear from them again. Ugh!

And yet, here I am whining about Kyaku, who I will now probably remember every time I see the kanji.

Small follow up: I just got 100% on the reviews from the kanji I was whining about last night. So I am now chalking all of this up to Wanikani being a sometimes-very-frustrating (possibly evil) genius.

I also thought eagle was one of the worst ones. The i-sound in eagle is much longer, and the word starts with an ‘e’ to boot.

I can recommend looking at KanjiDamage for both alternative stories and use of radicals. There’s also a script that displays a KanjiDamage window in the reviews.

Their mnemonics are on a whole other level than WK