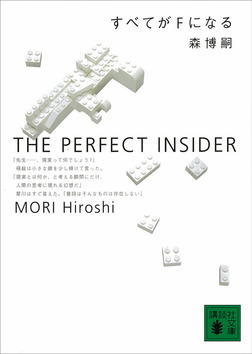 Note to @Redglare: This chapter has 4 sections.

Thanks for the note!

Just got the notification from the library my book is available! I might still make it on time!

The novel ends on page 508. After that it’s the 解説 (commentary).

Finished! Believe it or not, this is the first Japanese novel I’ve ever read front to back. Looking forward to Moe and Saikawa’s next adventure! (And more cigarettes, of course.)

Niiice, congrats! It was a big book too!

After that it’s the 解説 (commentary).

Anything interesting in there? (My bookwalker version comes without it…)

I only just finished the chapter so I haven’t read the commentary yet, well only the first page, which encourages the reader to go back and re-read the story (and be amazed).

So there are a lot more things happening in that last chapter than I expected! Pretty cool ending I think.

Alright but there’s a thing that bothers me (again). Why was Magata locked up in that research center’s basement in the first place? During the whole book I wasn’t sure whether it was her choice to live an isolated life like that, or if she was actually forced to be there. If I remember correctly, she was acquitted of the murder of her parents because of her mental disorder? So like, is this supposed to replace a mental hospital? Is that legal somehow? Was it mentioned at some point and I missed it? Maybe I’m overthinking it but usually you can’t just lock up people against their will.

It was never explicitly explained (I think). It seemed like an informal agreement that allowed her to be acquitted. If I’m remembering correctly, they mentioned something about the unseen powers that be being behind the decision. I’m guessing that 新藤 also helped broker the deal, since he was in talks with 四季 in the time leading up to her trial. Part of the motivation must have been hiding their child from the outside world. Although it is interesting that years later, he was secretly conspiring with 四季 to get her out.

Although it is interesting that years later, he was secretly conspiring with 四季 to get her out.

I think part of that is that probably they can’t keep the child hidden forever, so even in terms of getting her out, some of the motivation is still hiding what he did from the world. (That is my interpretation, at least!)

This has been mentioned here before, but he talks about how this was supposed to be the 4th book of the series, and 冷たい密室と博士たち was originally the first volume. The publishers (Mephisto prize committee if I understand correctly?) thought this one was better as a debut novel. 森博嗣 had already written 4 volumes before getting published. He seems really prolific, writing a book in a couple of months if that. Of course, he partially rewrote the books to fit the new order, and also added 5 new volumes to what was supposed to be a 5 part series.

Apparently, in a later book (笑わない数学者, which is now volume 3) there is an “imperfect genius” character, which was supposed to set the scene for Magata who is a perfect genius. But the order ended up getting swapped.

森博嗣 then gets praised for his depiction of the character’s thought processes, including details that are not always required by the story (the bits that some people found too long maybe?

There’s also a discussion about how 森博嗣 is often considered a “science type” mystery writer. The author of the commentary agrees with this description, but not because the books feature scientists/science themes, which he says is not always the case. However, he says 森博嗣 has a very scientific approach to facts and deduction. There are also some quotes about science and research from various books, which supposedly show that 森博嗣 must be a great researcher in addition to a great author.

At the end we are encouraged to read the next 9 volumes of the series (join us!).

There’s one thing I’m a bit unsure about

At the end there, did it turn out that those three people who were following Saikawa that day were actually not police officers after all? Was that a situation set up by Magata Shiki simply to give him the impression that she was going to be arrested? O: If so, that’s genius! As expected from a super genius, I should say

A bit disappointed that the BookWalker edition didn’t have the afterword/commentary - so thanks @miwuc for sharing the details!

Yes that’s my understanding as well. She faked her arrest so that Saikawa would let her go.

I found the ending disappointing somehow. Am I alone in that?

I don’t understand why the police would remove all tails from 犀川, when they know how easily 四季 can manipulate technology… Or maybe 萌絵 was only told they stopped tailing him, but they didn’t really…?

The 解説 is way too long though.

The 解説 is way too long though.

It did also succeed in making me want to read the next book.

Do you all remember when 犀川 said 「私、世の中で、顰蹙という漢字が一番恐いわ」 somewhere towards the beginning of the book?

I very much did not expect to see that scary kanji combination in another context soon, but then there was this today.

Hahaha, I guess I’m so used to seeing weird kanji by now, I was much more confused by the opening bracket followed by ご

I finished the book!

Overall it was at least good enough to be worth reading, but it felt a bit long and also kind of fluffed up with a ton of unnecessary stuff at times(it kind of felt like the author really didn’t want to skip anything even if it’s just stuff like the characters moving around or resting or whatever that’s not actually all that important). There’s also way too many named characters

As for the actual mystery, I guess I was right about who the culprit was and that Miki was actually just Magata Shiki, as well as how she was the one that caused the malfunction, and that no one actually entered the room but wrong about the method, mainly the robot being involved and the fact that they’re mother and daughter and not sisters, as well as how the daughter was just born in the room , but to be honest I’m not sure I can accept that the given evidence actually leads to that as the only possibility even if it’s obviously the correct answer since it’s written that way. The only clues I remember being given is really just that Magata Shiki looked younger than she should have and that she had some toys(and the robot) in her room, and I don’t feel like that alone would have to mean she had a daughter, but maybe I overlooked something

I didn’t think about Shindou knowing about stuff, but it would technically have been necessary for my earlier hypothesis to have worked out too(otherwise the helicopter murder wouldn’t have been possible in my version either)

I also found it a bit weird that none of the students seem to have questioned that someone else just randomly rides along with them(I guess she could just have made something that sounded believable up), that absolutely nobody noticed the age difference between Shiki and her daughter(I thought this was weird when I speculated about the sisters having swapped places, but if they’re mother and daughter it doesn’t really seem realistic that they can just trade places with no one noticing), and that nobody noticed the helicopter murder(I don’t feel like it should be that hard to see inside a helicopter if you’re close enough to talk to the pilot)

Aside from that, maybe it’s just me, but the supposed geniuses/smart people didn’t really feel like believable geniuses to me, like how Magata Shiki’s plan relies too much on people just going along with things without thinking everything through or double checking, like the mother/daughter swap, people not noticing the helicopter murder, etc. would probably realistically not all have worked out that perfectly and feels more like pure luck than something particularly “genius-y” and Moe figuring out the super unintuitive daughter thing(which I don’t actually remember us being any evidence for that only works if she has a daughter and not if they’re just sisters) but not some of the more obvious things for some reason. It kind of felt more like the author just magically gave them what they needed and then went “see, they’re super smart!” instead of giving them a believable thought process(but to be fair that’s super common when it comes to “genius” characters in books for some reason).

The rest of it was pretty satisfying though, including most of the solution to the mystery(it’s just a few parts that felt a bit off), how a lot of stuff from earlier on ended up coming back and how the author made decent use of a of stuff from earlier in the book, and aside from the smoking I don’t mind Saikawa that much and Moe seems cool enough. They really need to acquire a sense of self-preservation in case they end up having to solve more murders though(as does absolutely everyone else in this book, really, in particular the one person that actually did go somewhere alone and get killed in an easily predictable fashion)

So I guess I’d give the book a 3/5 or something like that? And I’ll probably read the next book in a while, but probably not immediately just because this one felt so long that I don’t feel ready to start the next book immediately after(unless the next one is a lot shorter, I haven’t checked yet)