WaniKani getting a bit overwhelming

I’m currently trying to balance WaniKani with a busy work schedule, but I’m trying to get through about a hundred reviews right now.

Anyone else got advice for keeping things manageable? I feel like I’m drowning in lessons and reviews right now and struggling to keep on top of stuff. I’m worried that if I’m only on level 5 and things are getting out of hand, how am I going to get through 55 more?

Sounds like you just need to slow down on your lessons. I only do 5-10 a day, which most people would probably consider slow but it’s what’s works for me and my schedule.

Are you doing all your lessons as soon as they’re available?

What you need to keep under control is your level of apprentice items. Keep doing reviews but stop doing lessons until you get your apprentice count down to something like 50. Then you can slowly start increasing it. I do best when mine is around 100.

On your public user account I can see that you’re at around 145 apprentice items. I definitely would take a pause on new lessons.

You should not do all your lessons as soon as they become available. These lessons immediately become reviews and they pile up to increase your workload.

One approach is to do a set number of lessons each day. I currently do 10 of them and my workload is around 60 reviews per day.

These numbers are good guidelines to start with. Feel free to adjust them to how you feel about the resulting workload.

it’s still very early for you… try keeping apprentice items down to a number that’s manageable.

I’m only barely halfway through and buried under leeches…(not to derail)…but as an example there are days I don’t even do lessons…and I’ll have 50 apprentice items and 100 reviews…thus my recommendation to look at the next day review count to keep things manageable. (I’m hell bent on not resetting)…Will all depend on your own schedule/timing/desire etc…

As many will tell you it’s a marathon, not a sprint… for comparison…started WK 2.5 years ago…

this is my reality my average accuracy (is around 70-75%)…based on the reviews (I’m not one of those that can get 100% on every review - also be prepared my burn fail rate is about 50%…so many of them go round and round multiple times)…and what you see if you compare yourself to others, are a lot of very high review scores…but the lower ones like mine aren’t as prevalent…SRS timings really matter per individual and when they are off, the SRS doesn’t work very well IMO

those long bars you see are after having all apprentice items being leeches and no room for new lessons…spent time just hammering reviews for months to try to get them under control and started new lessons again. but i have NEVER reset… and never missed review days! (don’t forget about vacation mode - used that for 1 week) and the average level up for me is about a month…heck of a lot longer than a year with 60 levels … right?!

The first 3 levels that are free don’t really tell you if WK is right for you IMO…it will take a while to find a pace that works for you. Go slow or fast…until you find just the right blend that you can keep up with day to day work/life/etc…whatever else you had.

If you want to study jp and have fun, don’t just to WK…use other resources, this will also force you to go slower. Best of luck…no matter what route you choose to go… even as frustrating as it is… just keep going even if it’s a tiny bit every day.

I will say (if I had to do it over again) I would not have used WK knowing what I know now. It’s a good platform and thankfully I have a lifetime sub…but if I didn’t have a lifetime, I’d long ago moved to an anki deck started grinding them out - as much as I really h8 how boring anki is

====
Constructive criticism meant here: The main reason I said what I did above, was that the two things that WK lacks overall are

Also wanted to include the positives here…. don’t want anyone to think I’m only focused on the things WK could/should do better…so to add a couple of additional positive thoughts about WK overall.

Now I should probably go do my reviews…but didn’t want to leave my post as I had left it originally given it was clicked as a solution. Good luck everyone!

As people have already pointed out. By doing all lessons, you buried yourself in reviews. The solution, is to control the flow of reviews through decreasing the number of lessons you do. Since you seem surprised by what happened, maybe now would be a good time to read through how the SRS system on WK works. So, that you in the future can gain better control of your own study pace and not end up being overwhelmed.

WaniKani’s SRS spans across nine stages, which are split across five groups.

The silver lining to this is that your reviews in a day is around or higher than a typical user’s peak workload and it’s only “a bit overwhelming”. Niiiiiiice. Here’s my obligatory link of the ultimate guide to wk since it covers some of the logic for better scheduling/planning of lessons and reviews in detail.

Same! Through level 8 I was doing all of my lessons as soon as they became available. But as lesson 9 rolled around, I decided to try a new approach: 4-12 lessons at a time (I changed the number of lessons before review to 4), twice a day. It’s working so much better! Like PeartaterTots and probably many of us, I have a job (and a wife and three kids), so WK can be overwhelming if you cram all the lessons into single-go sessions. But the SRS works really well if you space out the lessons (rule of thumb for me: always get to all the kanji, and then slow down after all of THOSE are in the SRS review queue because kanji are the keys to leveling up and keeping things fresh). WK is definitely a marathon, not a sprint.

I’m having a blast doing 10 lessons early in the morning (around 7:30am or 8am) but on rare occasion I would do them at 9 or 9:30am. I also do my reviews around the same time which is between 7-8am. This works out nicely because I get another small batch of reviews at around 12pm and then other small ones throughout the day with somewhat big ones at around 8pm and 9pm and sometimes 10pm.

But they vary between 40, 50 or 60 at night and usually early in the morning is about 20 or 30ish reviews. I can tackle them in small batches in the evening and so it becomes bearable. What works for me is to NEVER do more than 10 lessons a day even if they accumulate. I don’t care. This works for me because I want to have fun with WK and so far it is going great.

I have no rush and therefore I always look forward to my reviews and lessons. Everything has been a breeze so far

Do small batch of lessons every morning (10 to start off since you’re overwhelmed) and you’ll see how much fun you’ll begin to have. 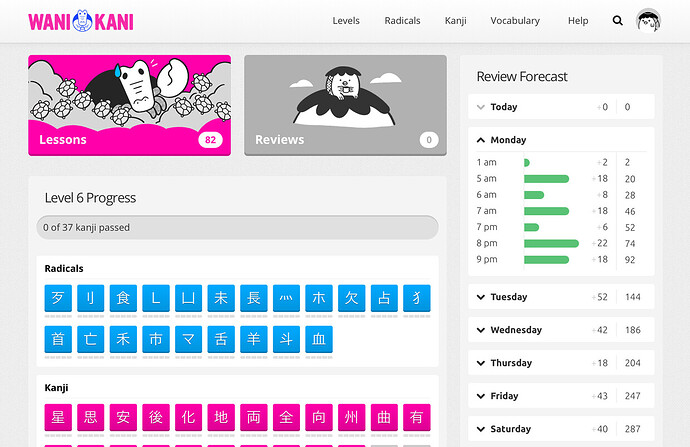 Don’t worry it gets worse

Like most have said, definitely do not do all your lessons at once. The magic number for me is 10 lessons a day, it keeps my reviews in check. Also, eventually you’ll start getting reviews from your master/enlightened piles, and you don’t want to be too swamped with reviews that you rush through and mess up a lot of cards and send them back to guru/apprentice.

I think there are around 9000 items on Wanikani in total, so on average about 150~ items per level. Going at 10 lessons a day, you would level up roughly every two weeks, which is steady progress imo. And you can always do more if 10 is too slow for you.

How many days do you typically spend per level doing 10 lessons a day if you dont mind me asking?

As others have said, how many lessons per day you do will set your pace. I do 20-25 lessons a day to keep on a pace of leveling up every 8 days but that’s pretty aggressive. Doing a certain number a day also helps even things out–if you do all your lessons in one big batch, you’ll end up having days where you have very few reviews and then occasional spikes of hundreds of reviews in a day.

I also suggest setting a limit of a max number of reviews you’ll do each day. For me it’s about 150 a day; if I have more reviews than that, I’ll let the excess sit until the next day. This also helps keep my review sessions even day-to-day instead of having massive spikes occasionally popping up throughout the week.

at 10 lessons a day, your time per level will primarily depend on the number of lessons in any given level. you can see what’s in each level on wkstats for example.

It took me a while to find a decent rhythm. Here’s how I generally approach a level:

Sometimes, I make allowances if I’ve got one or two more than my max in radicals or kanji because they unlock the other items. Know that the vocabulary is going to really help improve the kanji memory since it provides context and readings for the kanji.

This pace has got me doing each level at around 11 days. It’s been faster lately since the radicals start to get fewer and fewer. I think the last three levels have actually been 9-10 days.

I do my lessons at 9, with reviews for those new lessons at 1 and 9. Today, I only had 5 lessons available, so that was all I could do. 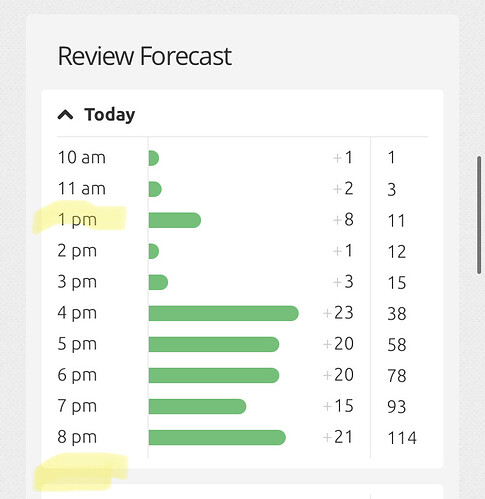 I just wanted to say everyone’s advice was really insightful! I’m only level 4 so most of the lessons/reviews are words I know how to pronounce and read already from sporadic Japanese studying. I’m still on the blitzing spree and my lesson performance hovers around 90-95%.

As multiple people pointed out, I think I’ll slow reviews down once my apprentice items are at 100+ (currently 59). I’ve also been going really slow when learning new lessons, reading all the text, making mnemonics of my own, saying the word aloud, etc, before progressing to the quiz. Sounds like I’m in for a real test as I level up more and more though and unlock more items.

Welcome to the learners who are also drowning. Any advice out there?