So I was doing my lessons and I just got 頼る, which according to WK is intransitive:

However, the example they use implies it is a transitive verb, and jisho also tells me it’s transitive:

Is this a mistake on WK’s part, or am I just an idiot? I would have emailed about this but I don’t know which it is and I’d appreciate some clarification if I’m wrong.

In 広辞苑 (Kojien), a pretty authoritative dictionary, it’s listed as intransitive, and it gives an example that uses を. So, the same “contradiction”.

It’s possible that it’s kind of like 触る, which is also traditionally listed as intransitive but also appears with を.

At the very least, I wouldn’t say it’s a mistake on WK’s part if they match with Kojien.

Jisho actually waffles here and lists both 頼る and 触る as intransitive and transitive: 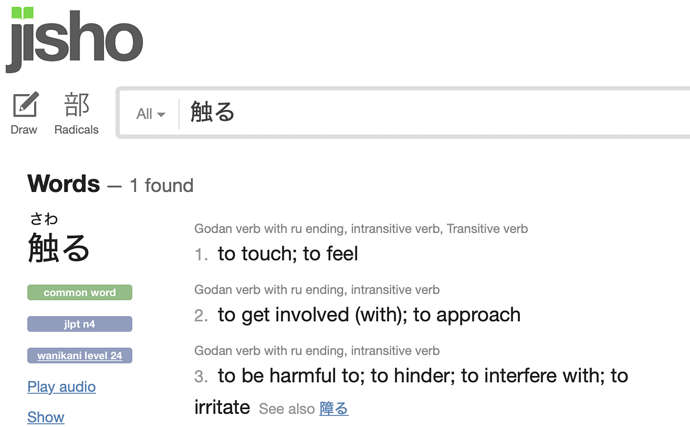 I’d love to be walked through the logic on how it’s logically possible to replace nothing, imitate nothing, and make war (on/with/against) nobody…

This cleared it up for me and I haven’t yet encountered any situations where her logic doesn’t apply:

This implies that the J-E concept of “tRanSiTiVitY” has no direct connection with the を particle. Things like this are why I won’t be drawing any lines in my mental sand until I can start over from scratch studying grammar in Japanese only sources.

I’d love to be walked through the logic on how it’s logically possible to replace nothing, imitate nothing, and make war (on/with/against) nobody…

That’s not really what’s implied by them being intransitive… It just means that the objects involved are indirect, not direct.

The fact that the English verbs might be transitive doesn’t have anything to do with it, though it does make it confusing for people initially, sure.

I would watch the video to see if I agree with her, but I just can’t take the voice.