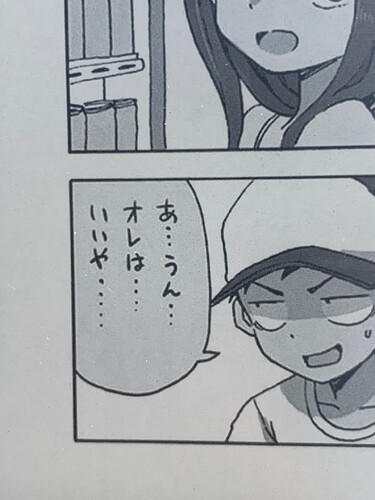 Yes, that is correct. Sometimes か will look a bit similar when handwritten, but the direction of the line above the loopy bit (scientific term) is your hint as to whether it is や or か. They go opposite directions. Plus the loopy bit will usually be bigger with か also, not cutting off so high on the line.

I based on the loopy bit to guess the や but actually didn’t think at all of the か… haven’t saw it yet, I guess rhey’re very similar

Yes, you got that panel right.

haven’t saw it yet, I guess rhey’re very similar

With messy handwriting, they can be similar, but it’s usually quite obvious, regardless. I’ve only had one or two moments where I had to pause and look again to confirm (but I’ve also still only seen handwriting in manga, so could be that there are some folks with awful handwriting I wouldn’t be able to read at all!)

(but I’ve also still only seen handwriting in manga, so could be that there are some folks with awful handwriting I wouldn’t be able to read at all!)

Yes, I can imagine that, most likely

Also I guess the translation for that line is

"When I treated Takagi-san, for me to buy (one), money ended. (there is a なんて missing but I didn’t know where to put it, but it’s not important).
At first I got 100% tricked into thinking that たら was if, but this time appears to be “when”

What does this mean?

but I’ve also still only seen handwriting in manga

Usually not that bad, but…

What does this mean?

Now that you ask, it’s something that went unnoticed but I have no clue
I can’t understand well how the や particle works

for me to buy (one), money ended

To buy mine, money ran out

Also not the や particle, as in to list stuff

Somewhere back in the earlier volumes, we came across this や sentence ender… Volume 2, maybe?

But anyway, specifically with いい, it basically behaves no differently than just いいよ, or like まぁ、いいっか, in my experience.

Edit: It also gets discussed a bit in Volume 5.

Talking to my tutor about it today, she basically says it’s similar to よ or ね, and that it shows up in manga and anime a lot, but not so much in day-to-day speech, except maybe in phrases like, まぁいいや (which would just as likely be まぁいいっか). I dunno if the usage of や stood out to anybody else, but in case it did, I figured I’d share what I found on it… In retrospect… I vaguely remember a discussion about や in the first volume. Hm. I’m going to go look now.

Edit: It was Volume 2! But we did talk about it before! (Wish I’d remembered that before looking into it more deeply, but such is life.

Usually not that bad, but…

I can only imagine.

Sometimes か will look a bit similar when handwritten

By the way, here are some か from this mangaka:

a script I do use… has been helpful with reading, the more handwritten manga fonts though I come across the easier it is to sort of expect a certain word (happens for most people in their native lang naturally) so reading isn’t necessarily as bad the more you do…

Yes, I forgot the ‘ran out’ expression

But literally it’s ‘something like’ in a bad or surprised sense, right?

a script I do use…

How much I’d like to try this, but I’m from phone

Haha, I know. Just figured he didn’t ask, so either he knew or ignored it.

But literally it’s ‘something like’ in a bad or surprised sense, right?

Practice makes perfect! Improve your Japanese significantly with our free online practice tests. We have JLPT Kanji, grammar, vocabulary, reading and listening tests in all levels.

What is the で after 間接キス? I’d say particle but what function has precisely here?

I’d say by, but idk if it’s the means function.

Btw can I translate がる function as “seems”?