Show me your books!

I haven’t heard about people reading it, much less owning it.

Haha, I adore anything Onizuka so had to get my hands on it ^^ Now just need to find a copy of GT-R from a non-amazon site and wait for paradise lost to finish to buy the series all at once 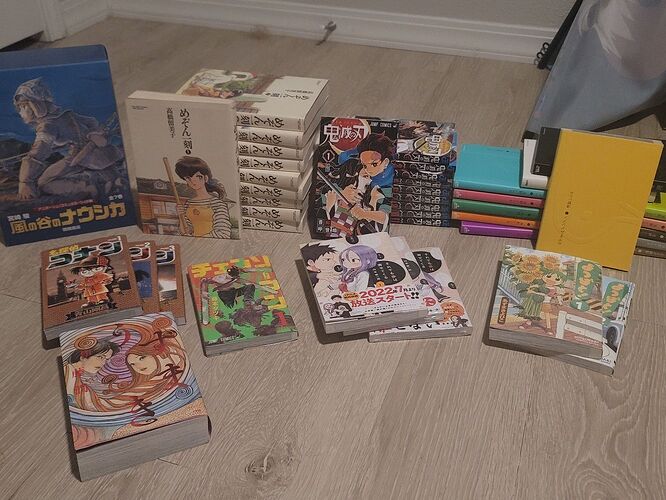 How much have you read of all that?

I was inspired by your pics to go and buy my own book nook. I love it, the level of detail is amazing. 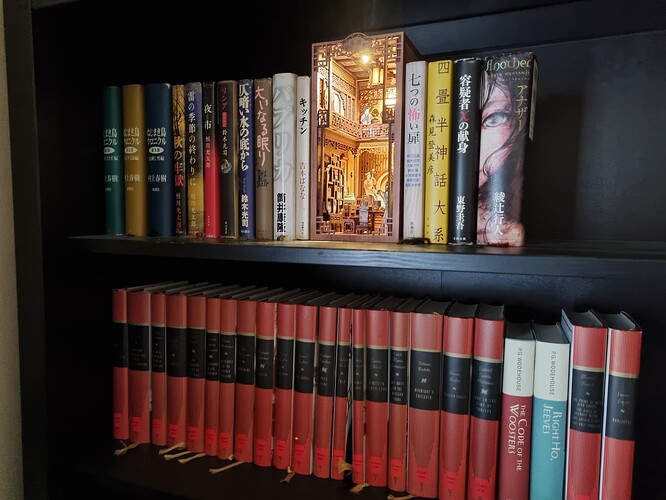 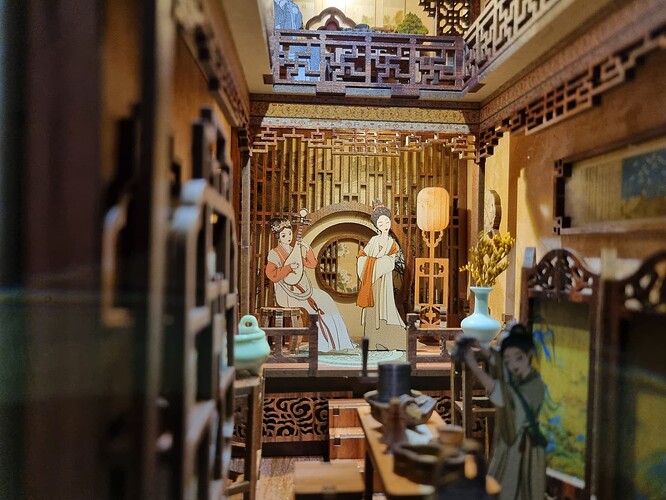 I really must get around to doing a photo of my bookshelves for this thread as I’m nearly up to five complete shelves now.

I shelved my copy of Eugenia, which filled that fifth shelf, and rearranged a load of books to put my Japanese stuff more accessibly in the living room rather than in the study behind a pile of junk, so some photos: 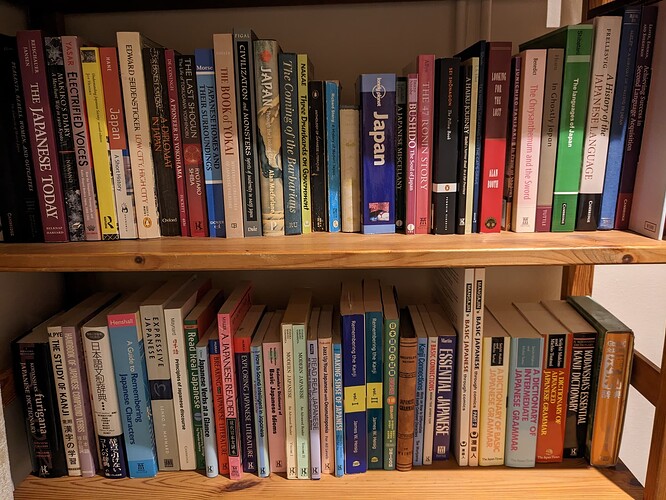 Textbooks and other large format stuff: 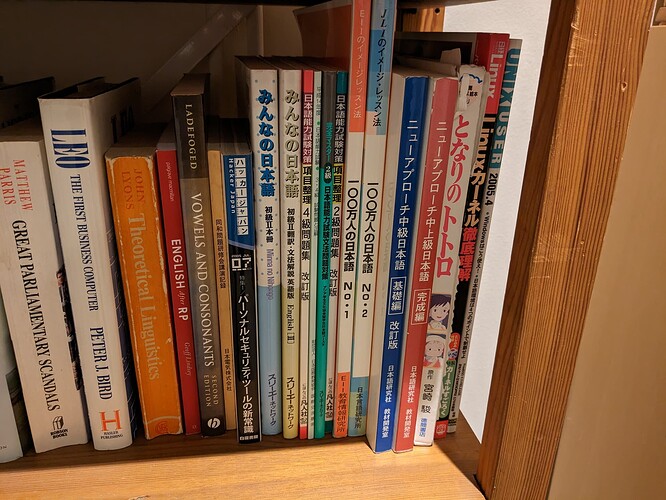 Fiction – these are all books I’ve finished: 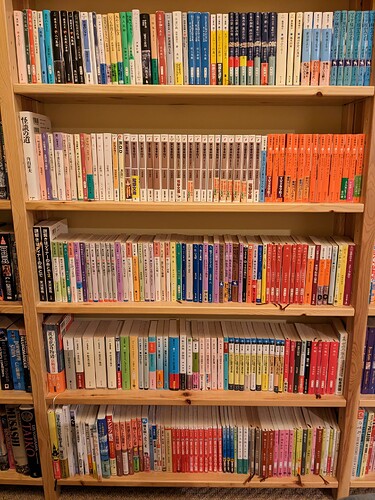 Books on their side are to-read, in-progress or never-gonna-read: 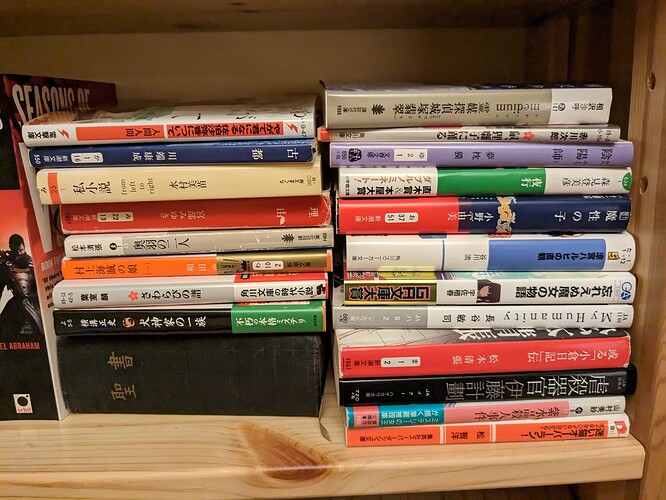 And some manga. I read a lot less manga these days so most of this is from ten or more years back: 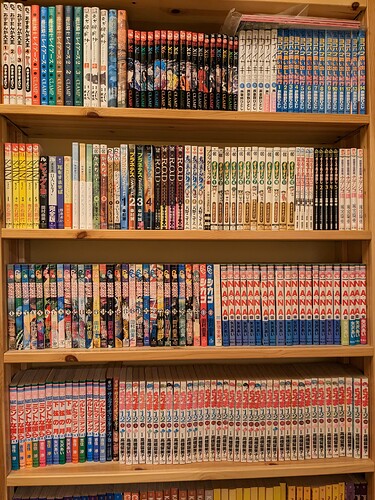 How much have you read of all that?

Of all my manga or the onizuka ones specifically? I have finished GTO and Shonan Days, as for 湘南純愛組! I need to re-read it, as I stopped somewhere around volume 17 - 19 due to other obligations, and haven’t picked it up since

Fiction – these are all books I’ve finished:

Amazing collection! Quick question, how did you find the 東京バンドワゴン series? I do like me a good detective novel.

Quick question, how did you find the 東京バンドワゴン series? I do like me a good detective novel.

I really like them, as you might guess from the fact I’ve read the whole series so far. They’re not detective novels, though. The author wrote the series as kind of an homage to Japanese TV family drama/soap opera, and that’s what you get – a view of a big all-in-one-house family that grows and changes as the books go on. People fall in love, move in, move out, have vaguely mysterious pasts that get revealed, low-stakes stuff happens, the neighbourhood friends and locals lend a hand, the B plot miraculously ties in to the A plot at the end of each chapter, seasons turn (every book has four chapters, one per season), there’s always a big breakfast scene where everybody talks over each other.

I see ^^ Just read 推理小説 on wikipedia and assumed

Thanks for the review, just picked up the first one on bookwalker

Of all my manga or the onizuka ones specifically? I have finished GTO and Shonan Days

What’s your take on Nana? I thought about possibly reading it. It is easy/difficult? What did you think of the story?

I did like it – it’s fun, in a super-drama shoujo manga kind of way. It’s been a long time since I read it, but I don’t recall it being a particularly difficult read. The important thing to know is that it’s unfinished – the author developed serious health issues, and so the series just stops at volume 21. (Apparently there were a few chapters that were in the monthly magazine that never made it into a collected volume – I should try to chase those down someday.) So if you care about a properly concluded story you might want to avoid it (and also CLAMP’s X manga, which also famously has no final volume, though in that case it was an author-publisher dispute).

Ah, very good to know. I don’t like unfinished stuff. I hope the author’s health improves though. 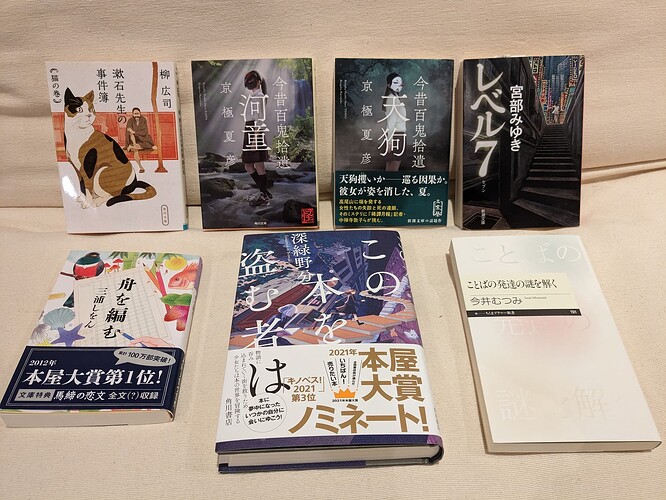 I really need to pick up my reading pace, because my to-read pile is growing alarmingly

@pocketcat and I are going to read this book end of February/beginning of March-ish at a semi leisurely pace. We’re going to have a discussion thread on natively, if you’re interested in joining us or follow our impressions.

Yep, that’s why I picked it up. Hadn’t realised you were doing it on the natively forum, so thanks for the heads-up.

Yes, I meant Level 7. That’s cool, looking forward to it.