Went to Kinokuniya for an early birthday present and bought 11 books, so now I’m gonna have to be responsible and read even more before I buy more books. Though, granted, 3 of them are JJK LNs that I’m not gonna read for a while anyways, but still.

but I still put off reading until pretty late so not a whole lot, but I still finished off the first volume of クールドジ男子! Seems to be my go-to when I don’t have brain energy for anything else

It’s very fun and cute, and all the art is just so nice to look at. Good times

but hopefully tomorrow I can get some more substantial reading in!

I managed four more pages of Yotsuba& today, I think that’s all I’ll get time for, work starts again tomorrow, and so much to do before then…

Something new today: I’m trying out reading the orange novelization to see if I can build stamina at reading without pictures. For this, I’m using the icon

, as opposed to the manga where I’m using

20 pages of 好きっていいなよ! I think my WK leeches are slowly going away… I’ve been working on them for a couple weeks now with no new lessons, but I am getting bored. I think it’s time to start learning new things.

For Hunter x Hunter, actually I finished Vol.2, but that isn’t enough to catch up with anime. (Currently finished EP.17, and the vol 2 is around half of EP.14.) I would continue to watch the anime, but not decided for the manga.

I picked up March Comes Like a Lion, and I like the drama (or the storyline). Finished only Ch.1 so far. The article at end of Ch.1 is readable so far, but I might have to look up persons later. I need to look up several vocabularies at the third half of that page.

I also purchased Spice and Wolf Vol.1. This one is OK to read, but a little troubled by the shear length (almost 50 pages in Ch.1). Finished the prologue, nonetheless. There might indeed be an “interesting” factor, but I would need to take a taste first.

TUGUMI isn’t dropped completely, might be read later. But probably not Night Cafe, although I might re-read the first vol.

I installed Wikipedia app on my mobile Android, and made it randomize Japanese articles. They are usually somewhat difficult to read for now, but the browsing experience is good.

Grammar-wise, I have bought Tobira. I should have an older version of this one, but I have lost it. It is easier to do than the grammar workbook directly, or output prompt workbooks.

Today is the last day of my summer vacation! I will have to make some serious adjustments to my study schedule in the coming weeks, but I’ve found from past experience that I won’t know exactly what will work until I try it. I’m hoping to read at least a little every day until the end of August.

Haven’t been updating recently because I’m still playing Persona 3 Portable xD same game different day. Though, yesterday was what I am now labeling a “Brain Rot Day” where while I might be doing stuff in Japanese it neither moves me forward or backward. In this case I was just doing Tartaros until I reached the limit, yes there was some reading, but it was stuff I either didn’t need or didn’t care about. But I am still doing that.

Hoping for an offshoot club too.

Yesterday I read over half of Spy x Family mission 6.

Today has been bad work wise (was awake for a lot of the night on-call then slept till midday and straight to work). Getting home I’m really struggling to focus. So I’ve looked at the start of シャドーハウス volume 2 just to read something with my very tired brain.

The cat bowl is empty. This causes Wagahai-cat to have an existential crisis. He must stoop to eating some Zouni, but it contains mochi, the relentless demon of stickyness, the 餅の魔. All he can do now is pray for divine providence to save him.

Japanese found in the sand

He must stoop to eating some Zouni

This was one of my favourite sections in the book

(except on August 19th when I did nothing)

I haven’t updated for a few days. Partly because I haven’t felt like I’ve had anything to update with. I’ve played some SMO, finishing off the main story and I’m now in the extensive post game.

I’ve been keeping up with WK. But instead of reading more serious things (like manga

), I’ve been doing other things. No particular reason.

But it has felt right to relax a bit. I expect the trend will turn eventually. I’ve been spending time on some other hobbies.

Although the trend might not change this coming week because I just decided to start digging into health stuff, food stuff specifically, and the amount of emotional baggage I have there is… astounding. But it is past time to untangle some of that. I want to feel comfortable and safe with food and my own choices. I want to eat cookies without guilt. I want my body to feel good after I finish a meal. So yeah, my emotions will be spiking high on the intensity scale for a while, I predict…

Today I just read the next story in ボッコちゃん What do you do if a deep hole in the ground opens. Of course you throw all your trash inside. The people in this story thought that would be a great idea. But it ended badly for them.

Today I read Chapter 3 of Yoru Cafe Volume 2. It was a shorter chapter than usual at around 7 pages long, which made it much more readable for me than usual

I finished the other half of book… I’m not crying, you’re crying

Seems like I’m the first one to add it on bookmeter? o: 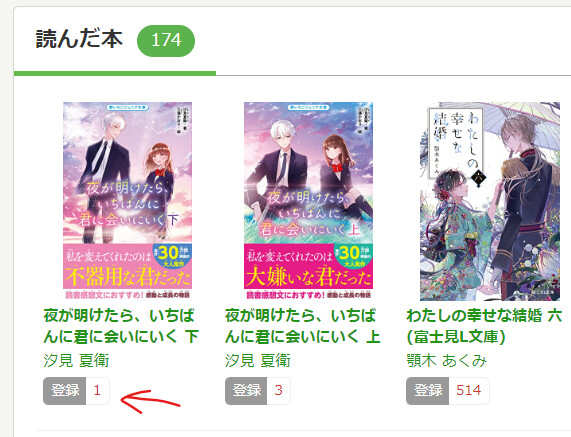 I read the previews for プライドにキス, which I saw recced on tumblr, and 花咲く恋がふってくる by the same mangaka, as well as ディノサン: Dinosaurs Sanctuary, which was advertised on a paper included inside one of the volumes of 極主夫道 that I got yesterday. Also finally 異刻メモワール, which has been open on my tablet for ages.

Tired again today (though it was mostly because I made the bad decision of of getting an iced chai, which I then had to down within the span of like 5 min so it wouldn’t get too watered down to be edible. So sleepy…), so I only read ch 59-61 of HQ. Only 1 more left this vol, augh

I realized today that aside from using 僕, Tsukishima also uses 君, rather than お前 like all the other guys thus far (actually, I think Take-chan uses 君 too?). Even though it’s somewhat surprising, it does fit him… (Though, 僕 and 君 are on the same level of politeness, aren’t they? So looking back, him using 君 isn’t surprising except in the way that discovering that he uses 僕 was surprising, if that makes sense.)

loooool I forgot it was this match where Kageyama tries to compliment Tsukki and says “knife” instead of “nice.” Though here it’s more like “nuff;” I’ll have to pay attention to the audio next time I watch the anime, since I’m pretty sure the subs say “knife.” 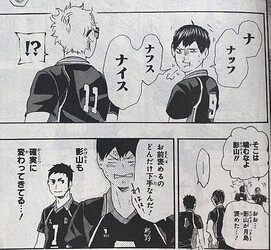 Also, it’s sad that Tsukki doesn’t know how to react to people caring about him or complimenting him, but at the same time it’s hilarious watching him flounder lmao (like with Suga in an earlier chapter? Good stuff). Anyway, I adore him. (Kageyama, too.)

I didn’t read the past two days, just too busy for honestly much of anything. Call it an accomplishment I didn’t sleep in my outdoor clothes.

Today I was also busy, but have done a chapter each of 火車 and 天使の傷跡. I’m still not really enjoying 火車 and enjoying 天使の傷跡 quite a bit despite all the random kanji-for-words-I-typically-see-in-hiragana I’m looking up. Today brings me 悪戯 ( いたずら) and 折角 (せっかく). Or maybe I’m enjoying it more for that. Unsure.
火車 I’m just not that interested in the case to be honest. I realized a chapter or two ago this book is probably directly related to the phrase 火の車 which I’ve head before. I don’t know enough about the term 火車 in particular to know if it carries the same connotations at a glace for a native Japanese speaker. In any case I’m hoping it gets a bit deeper/grittier soon because it’s 500 some pages and I’m not really loving it.

Week 3 of the book club for 十角館の殺人 opened and I’ll need to get the reading done for it. Probably tomorrow, not sure I have much more energy tonight and if I do I’ll probably just indulge myself with another chapter of 天使の傷跡.

Alright, a bit better today! Although I was still naughty and played Steins;Gate instead of doing any of my book club things, rip

I’m enjoying it though, I finished the prologue and I’m very intrigued

Hopefully life stuff will settle soon, I’m just back in town for the new semester so I’m a bit scattered figuring out new routines

I’ll get there though! I’ve got lots of fun stuff to read

Small reading day as I spent half the day trying to get SSL set up on two separate servers. (Neither was successful.

Thank you for the group accountability, I’ve had a few nights when I was really tempted to say heck with it, but I sat down to read anyway. No more gaps in the calendar!

Made it to the last chapter of Tsubasa Reservoir Chronicle vol 1. (Which is much easier to read than the info-dump in chapter 4.) Our three dimension-travelers are checking out the city and arguing over what aリンゴ