I think it is weird by using in an English sentence, but I am not a native speaker.

Don’t worry, it confused me at first, too, and I’m a native speaker of English

. I saw someone say that online and thought they were simply being ungrammatical and unknowingly using the word “bias” wrong. As it turns out, it was just a new use of the word, and I was the one who was wrong, haha

during which I’ve been reading mostly 博士の愛した数式

oooh, this is one I have on my to read list (along with like….every other book because I have no self control hahah). How have you been finding it?

I’m mostly enjoying the relationship between the main characters gradually being developed and the appreciation of maths, reflected in many parts of the book. As for the language, some parts, although not so many, were challenging for me, which combined with the rather slow-paced story made me want to take a break from it. But overall, I would recommend it.

Last update before the summer challenge, hope to see everyone there!
(I’m sure I had a thought of something else too, but I’ve completely forgotten it)

What did I just read?

Continuing my sampling of horror award winners, I read the first 20 or so pages of 穴らしきものに入る. (What is this obsession with holes? Either they’re everywhere or I just tend to be attracted to books that feature them)

This one is supposed to be “humorous horror”. A man realizes he can somehow enter the water hose as he’s washing his car. From then on starts his obsession with holes. Anything vaguely hole-shaped, he’ll enter it. The second hole he enters is his co-worker’s mouth as he’s eating (!), then the holes punched into a legal document at work (!!). And the list goes on. It’s super weird, yet strangely compelling. I love the absurdity and just have to know more. Horror, as I understand it, it isn’t, unless there’s a very horrific punchline at the end? It’s also super easy to read so far. I’m intrigued.

Still undecided on what, if anything, I should choose to read from this not-quite-horror list. I’d like to start the summer challenge tomorrow with a brand new book, but I’m still not sure which one it will be. Looking at the books on Bookwalker I found there’s a 50% coin back for Kadokawa books (all of them are Kadokawa). I’m seriously tempted to get all three I sampled, but what if I end up hating them after all? Decisions, decisions…

and it’s not like I have nothing to read if I don’t buy anything, there’s three unread books on my virtual bookshelf waiting for me.

Edit: Silly poll time! You have the unique opportunity (

) to vote for the book I’ll read next. The options aren’t the book titles though, but each book’s very first sentence. Which opening sentence sounds more intriguing to you?

It’s the last day of June, and that means I’ve read every day for 6 solid months. Feels good!
Today was a Yotsuba day. I read Chapter 78, in which Yotsuba gets her hands on some paint

It was very cute and fun.

Thats 5 books completed this month, bringing my total so far this year up to 26 and the time I spend reading each day is feeling more and more like fun instead of studying.
The teenage version of me who was desperate to learn Japanese but didn’t have the resources to be able to would think that this 33 year old version of me was incredibly cool, and I think thats something to celebrate.

Thanks to everybody for keeping me motivated with your updates and encouraging words, and as always thanks to @windupbird for organising!

Onward to the Summer Challenge!

Bob is my bias now

Bob best boi!
Such timing, I came across this word for ‘fan’

Maybe not the term one would use to describe oneself tho 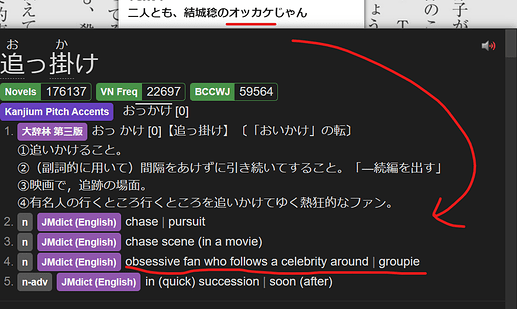 Most of April and May went by as tiny read days due to busy preparing for exams. Didn’t read every day during June, but it was kind of refreshing to take a break since the official challenge had ended already.

First time I managed to finish a book within a week: かがみの孤城（下）
Previous record was probably SAO 7 in 11 days (summer 2021).

What did I read?

I thought Honzuki was a light novel this whole time ??? douiukoto

I would like to say that I read Japanese on this last day of the off month for the spring challenge, but unless I suddenly feel a lot more awake, it isn’t likely. I did play some Aterlier Sophie, so got some listening practice done in any case.

With today, I will have missed one day, and (see next post) I decided to take a break for 3 days during June. Feels right to take a break during the off month, and just a few days fit perfectly for me.

I wanted to once again thank everyone for their updates, encouragements, grammar help! and the interesting discussions we’ve had here.

It is due to this thread that I’m leading a book club.

And I think without this, I wouldn’t have considered joining the VN club starting up July 15, but I will.

I’m so much more enthusiastic about reading which feels a bit weird to say from a self-proclaimed bookworm, but true nonetheless. I also feel more confident that I will eventually see the end of my current collection… well, in a couple of years perhaps.

I’ve had a great time, and I’m looking forward to starting the summer challenge with you all tomorrow!

Well, got less tired and decided to peek at one of my new purchases and ended up reading the whole first chapter of ホテル・メッツァペウラへようこそ. I only meant to check out a couple of pages but before I knew it the chapter ended.

I did no look ups partly because no furigana and I was only gonna check the first few pages anyway. Probably won’t keep reading it right now since I have enough on my plate but it was a lot of fun.

I think it is weird by using in an English sentence, but I am not a native speaker.

It’s not just you, I think using the word “bias” like that would sound weird to the majority of native English speakers too

Sorry, idk if this is even interesting for anyone else to read but I’m having fun rambling about biases

Meanwhile I just realized that I forgot to ever do a summary post for this challenge, whoops
My priorities are obviously in order

Finished off the spring challenge with 少女終末旅行１!

Shinkai Makoto’s got a new novel coming out late this August, すずめの戸締り, and it sounds good. Dunno if I’ll be getting it then, but it’s definitely on my wishlist!

I just found out about this. I’m excited for the idea of reading the novel in time for the movie to come out in November.

I wonder if anyone would be interested in joining me in this challenge! It’s a little longer than I expected at 384pages though … It might be a little tricky to finish in time. (384pages/80days = 5pages/day = 34pages/week)
I really need to improve my reading speed.

I didn’t have a lot of time to read today, so I just read a bit of the next manga in my backlog, やがてになる. I’m enjoying it so far! And with that it’s officially onto the summer challenge; hopefully I’ll have more time tomorrow to get off to a good start

The options aren’t the book titles though, but each book’s very first sentence.

I just glanced at the poll and was like, why do all the books have such weird titles? Then I read the text above it…

I think you somehow infected me with your summer-ghost-story-reading, and so I bought 宮部みゆきの江戸怪談散歩 which is 50% discounted right now on Bookwalker, and to my huge surprise it contains lots of connections to today’s Tokyo, even with pictures and maps of where the stories took place

I’m so much more enthusiastic about reading which feels a bit weird to say from a self-proclaimed bookworm, but true nonetheless.

I don’t think that’s weird at all because if reading is (still) too hard for you, then it can quickly become demotivating. If it’s only one book out of a bunch, it doesn’t matter too much as you can always read something else. But if your level is still so low that basically every book feels too hard and draining, then of course you will not be very motivated. It was really great to watch you jump that chasm and take on more difficult books! Just keep going, and you will keep learning faster than you think

Which is to say, the Spring Challenge is over! Thank you very much to all your contributions, it was great fun reading them

Here is what I read during the challenge - quite a mixed bag actually. Finished three books:

One each month, to keep my bookmeter stats happy

I think you somehow infected me with your summer-ghost-story-reading, and so I bought 宮部みゆきの江戸怪談散歩 which is 50% discounted right now on Bookwalker, and to my huge surprise it contains lots of connections to today’s Tokyo, even with pictures and maps of where the stories took place

Oh good, my evil scheme is starting to work then!

I hope you enjoy it! Let us know how it goes! I had looked at that book too, but actually the pictures and maps put me off a little. I like my ghost stories to not be connected to reality too much!

From what I can see it’s not 50% discounted, but 50% coins back, no? It amounts to the same thing in the long run, just making sure.

I just glanced at the poll and was like, why do all the books have such weird titles? Then I read the text above it…

Methinks that your vote was not entirely based on the opening sentence alone… Surely it must have reminded you of something?

Methinks that your vote was not entirely based on the opening sentence alone… Surely it must have reminded you of something?

確かに, it reminded me of something

I’m still not sure whether that’s actually the opening sentence of what I have in mind (I thought they mentioned the move a tad later) but even so I still think it’s a great first sentence, because (a) it indicates that there are normal grown-up people in the book and (b) it feels so innocent-naive, and at the same time something dark is looming overhead. But yeah, if it’s really the first sentence of 穴, then I should probably change my vote because I said I’m not sure whether I’d recommend it.

It is, but don’t change it! It’s obvious you really were evaluating the first sentence only, so you played by the rules

I am guilty as well!

I’m actually starting to think it might be the type of book you’re looking for, so I’d be interested what you think of it

June was really productive for me! I also managed to experience the “reading 100 pages of a braindead book/light novel a day”, which is a new daily record for me. I started reading ifの悲劇 and it’s been very whack so far, but somehow very easy to read. I read 40% of the book yesterday, which pushed my daily average for June above 20 pages a day!

I also finished 3 books this month: 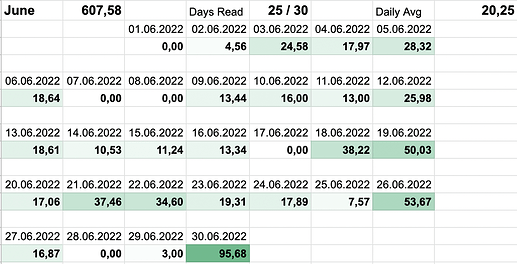