I’ve been bad about posting

Super tired today and only ended up having the energy to read the first two chapters of ジャム屋さん on Satori Reader.

I played some more AI: The Somnium Files today! I’m going down pretty much a completely different path than I have in the past so lots of new stuff; is still a garbage mom though, she really told her daughter she wished she was never born huh?? Awful, the whole sequence in that somnium with アイボゥ comforting みずき through her mother’s voice was really depressing, that poor girl needs so many hugs

There was fun little part that I think is a Haikyuu reference? I could be reading Haikyuu into everything lmao, wouldn’t surprise me, but: 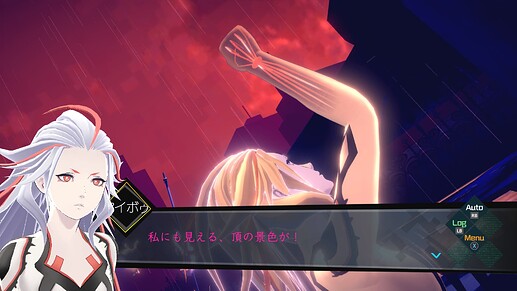 And then she just spikes this giant panda head full force

On a different note, I was in the mood to read a book today and I’m all caught up on のカフカ sooo I picked up がくいている again! And I ended up reading 20 pages in like two hours so yeah, safe to say I’ve improved since I last touched it. I also briefly attempted いビスコ again and I’m at the point now where I can actually tell how much weirder the writing is in it than in つよ

つよ is miles easier for sure. But yeah it was really nice to go back to it! It felt really doable with some lookups here and there, and I always love seeing the character interactions and such. I’m finally living up to my avatar again haha

Poor Yotsuba, at least Ena has got her back, and then poor Ena. Seldom goes well for Ena, eh? The stillness at the end when we cut to Asagi was very nice. Then chapter 14, an Asagi chapter!, even called as such (sneakily). Although pretty tame appearance from her. Winding Fuuka up with making it seem like their dad is dead. There is some interesting stuff going on there potentially, considering the facial expressions of Asagi and mom. While Ena happily announces that Asagi will kill their dad soon.

So neither were laugh out loud chapters, although a couple of chuckles slipped out. Poor Fuuka though is the butt of a lot of jokes and supposedly not very skilled at anything.

Her T-shirts are a highlight even if her family can’t appreciate them. I hope she gets to show off some brilliance at some point.

Summary update for June so far:

I’ve continued reading everyday. I’m keeping up with the book clubs and finished 佐賀のがばいばあちゃん. I’ve also started 糞尿譚 (currently at 17%), which I’m finding hard. I mean, it was written in 1937 so there’s really no way it would be easy, but still, my newly-found confidence took quite the hit. It didn’t help that I tried listening today (something I haven’t really actively practiced so far), and, what do you know, Japanese is still very much a foreign language.

I mean, I do catch most of the words I already know as long as they’re spoken slowly and with adequate pauses (not happening), but connecting them into a cohesive whole that makes sense? I’m still not really doing that.

Now I’ve gotten a bit further into the book I can safely say that the English version I’ve read was actually really quite bad. Maybe it was just the version I read, but it’s like reading a whole new book.

Most stuff I’ve read that’s been translated from Japanese is usually pretty good, so I’m surprised that a classic of Japanese literature has such a poor translation. Maybe I bought the really naff copy and somehow missed the good one

Today I read chapter 68 of Yotsuba. It started and ended as cutely as usual but there was a really sad bit in the middle which I wasn’t prepared for! It ended on a much nicer note though thankfully!

(I’ve forgotten how lively it is at home, feels good to be back.)

I read the preview for クロスゲーム. I remember borrowing the series from my local library (though in middle or high school, I don’t know) and loving it. I was reminded of the series today and thought I might get it sometime.

I kinda doubt it will, but if this ever gets an anime or something, I hope Enoki Junya voices Taiga. He’d be perfect for him.

The last chapter is longer than the others, ~60 pgs rather than ~30 for the previous ones.

I picked up 明日をくれた君に、光のラブレターを today and read the pre-story bits (three partial pages) and 9 pages of the prologue, 放課後のシークレット, leaving off on pg 16. Midzuki is an outsider, doesn’t have many friends (only the one, it seems: Ritsu), and doesn’t really know how to deal with people, so I can relate to her.

Read some more つよ! They’re all doing their best in their own ways, it’s really nice to see. They’re all good characters :') so it’ll inevitably hurt more when more angst comes, rip. I also started playing Obey Me! on a whim for funsies

I don’t know much about it but I figure spotify’s recommended me enough of the songs from it at this point for me to give it a go haha. It’s cool so far! The whole intro section was kind of a lot but it seems fun, at the very least it’s more reading practice for now

It’s a lot more motivating now seeing that I’m moving by a percentage each read, rather than a tiny fraction.

I’m having fun too. Look forward to reading each day, even though I know how everything pans out, it is like reading it from new again. The humour really comes across in this first chapter (and the overall feeling of egotistical self-loathing that, even without knowing how the novel turns out, it’s used so well that you just know things aren’t going to go well), the tone is really well set.

Taking it a sentence at a time so I don’t get too frustrated with the start-stop of having to look up a lot of words and “what even is this grammar? WHAT IS THIS”, but that isn’t always smooth, today the record was beaten for longest sentence at 243.

Started reading 渡瀬悠宇 The Best Selection 2 by 渡瀬 悠宇 yesterday (after I posted my update on finishing Yotsuba&). It is a short story collection. I read the first half (barely) of (story) Perfect Lovers, and today I read the other half.

Definitely some words/sentences here and there I had trouble understanding. One thing that confused me for a while was that the last name of a character was 浜 and I didn’t realize (his first name was mostly used), so there was one sentence that really confused me, but when it later became clear it was a character’s name, I could understand the sentence. Imagine that.

But overall understanding of the story was fine.

I’m reading this more to finish it than thinking I’ll enjoy it a lot. I love Yuu Watase’s series Alice 19th; it is so good (although I think it is because it happens to fit my taste perfectly). But nothing else I’ve read of hers have been as enjoyable. And I felt very まあまあ about the first Best Selection, so not expecting to suddenly love her short stories in this one. They aren’t bad, just not… great.

Completing things gives me a bit of a warm feeling when so much else doesn’t have that glow currently. So picked reading this so I could get it off my to-be-read pile and finish the mini-project of reading the two Best Selection volumes.

Edit: I also started playing Atelier Sophie with Japanese audio (but English text), and I’m enjoying the listening practice while also keeping it kinda non-study mode by just being able to read the English when I either don’t understand what they say or don’t quite catch the words (sometimes I lose focus). It is nice to notice how many little/short phrases I’ve seen so many times that I advance dialog without even glancing at the English (because I understood what they said). (I very pointedly stare at the visuals while listening so I don’t inadvertently use the English to understand the spoken words.)

Also so far the translation seems pretty good. Very happy to have the Japanese audio, because there is something about the cutiesy way characters talk in these kind of games that just sound awful in English (to me), but I have no problem with it in English. Although why the nun sounds like a 5 year old girl, when all other chars don’t sound that young, I do not know…

I’ll be reading bookclub stuff over the weekend I expect, but I’m planning to start Volume 11 once thats done. Todays chapter had lots of cute bits, including plenty of Miura having no idea how to handle Yotsuba. It was nice to meet Miura’s mother too! I loved Youtsuba’s description of her being おおきいみうら

I’ll see myself out…

I so nearly put a NICE into my post but managed to stop myself!

Thanks for doing it so I didn’t have to.

Is this book a light novel? Because there was a lot of white space and not very dense pages. As for the plot, I liked the development. I’ve decided to look at the book club threads after I’ve finished the book. Maybe I can finish it tomorrow

That would be cool. Then this will become the first book I’ll have finished within a week.

Is this book a light novel? Because there was a lot of white space and not very dense pages

What is and isn’t a light novel has always felt very vague to me, but imo light novels have very distinct character tropes and I didn’t pick up on any of those in かがみの孤城.

So… I kinda stopped this challenge in the middle of May, whoops. But I’m going to get back to it! I’ve added a June calendar to my home post, and I read a bit of 極主夫道 today