It’s also the source material of a new, popular anime!

Oh, I didn’t realize that the anime is new. Well, in that case, it’s probably rather due to that and not due to the book club I guess

Just a little bit of reading today as I’m travelling. I read 6 pages of ふしぎねこのきゅーちゃん which is great for reading when you don’t have a lot of time since its a 4-koma where you can generally read each page as a standalone story.

Read today’s hyakumonogatari, about a samurai who becomes banished as a ronin because he gets drunk one night and punches his superior. In need of a job (and more sake) he wanders round town until he stumbles upon that the emperor is looking for some monster exterminators to get rid of some pesky monsters in a temple. He says he’ll get rid of the monsters, provided he can be paid first so he can get some sake (and they actually agree to this).

So, now that he has the money he naturally goes out to hunt the monsters… drink lots and lots of sake. He passes out in the temple and is awoken by a big Onyudo, the ronin greets the Onyudo and tells him how famous he is for being a big scary monster. This flatters the Onyudo and he starts to show off by transforming into all sorts of things like a princess, tiger, kappa… the ronin is then like, “betcha can’t turn into something small like an umeboshi!”

To prove a point the Onyudo transforms into a tasty little umeboshi, and the ronin, knowing that nothing else goes better with sake than a umeboshi-snacc, munches him up.

It’s probably a little bit of both. I’m sure it became a book club suggestion (and practical shoo-in) because the anime’s currently airing

Finished reading that Shinymas event earlier today. My favorite part of the last chapter was when Kaho was giving speech, saying good points about everyone and when it came to Chiyoko this is what she had to say 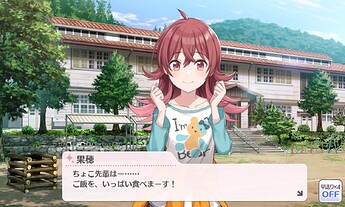 With that event done, I started on the next Hokura event. In this one, they are doing a web drama about some delinquents that have taken over the school. The style of speech they use in the drama is a bit different than normal SoL stuff so its a little more lookup heavy but first chapter was funny seeing Kaho with a “delinquent” way of talking.

Read half of chapter 29.
@Naphthalene The case of the mysterious bamboozle sentence is now unmystified. Thank you~

Random: I’m very curious how prepared I’m going to be for my exam next week. Might have spent a bit too much time preparing for the previous exam but it was worth it. Reading might have to take a break, we’ll see!

I bet you had trouble figuring out how to spell schysst

I don’t think I ever saw this written or ever had to write it, thankfully

The K (like in kyrka) sound I didn’t find too awkward, K’s weird in English anyway so it being similar to a SH didn’t seem too out of place.

The hardest ones for me are the HJ sound like in hjord or hjul, never felt like I could get the hang of it. And, kinda specific this one, but I knew someone called Mårta and I could not get that the “-rta” part at all, I thought it’d just be like Martha in English but with an å… but no, it’s some kinda chth noise that I can’t make. Thankfully that one name seemed to be the only time I had to try and make that noise.

Also, how a lot of words end in: er, ar, or - because of my accent, when these are in English this is the same noise (an UH sorta noise), so trying to making them sound distinguishable was a bit difficult. Also also, knowing when something is ETT or EN, that is just… no.

Honestly, most European-stemmed languages seem to have really out-there pronunciations (and grammar) for no real reason other than “Oh it’s always been like that cos some guy did it like that back in the 1600s, now no one can agree on it and we can’t be bothered to change it”.

(Oh yeah, English is my first language, forgot to mention that)

Such emphasize on the sound that I just can’t figure out,

I had that same problem when I was on the Navajo Reservation in Arizona. Navajo has some sounds I never could figure out how to say. Other Navajo sounds I did figure out, but they were so different from English sounds.

Thank you everyone for the language discussion(s) today. I really enjoyed them. m(_ _)m

Talking about languages with other language enthusiasts is so much fun.

Now, I will finally do my update.

Finished the chapter of 坊っちゃん I was currently on. The pictures accompanying this part of the story was actually not accurate to what happened in the story. But it did build suspense, I guess. But kinda weird. Now finished up to page 21 of 36. The story’s end is drawing closer, and I’m excited to see how it ends.

Honestly, this might be my favorite story I’ve read in Japanese so far. (Excluding my favorite manga series which I’ve read many many times in English, and only did a 多読 style reading in Japanese last year. But since I don’t understand it well enough in Japanese yet, especially without lookups, I think my statement still stands.)

I was frustrated with my slow progress in 告白 these last few days, so today I more or less devoted my day to reading. And what a ride it was! Lots of things happened, other things were hinted at, perceptions are starting to change radically. It would be such a fun book to read in a book club. As it is, I can’t share much without spoiling stuff. I’m glad I saw the movie so many years ago that I only remembered the basic premise and unconnected scenes here and there, because much of the fun is in gradually discovering all the hidden aspects of the story. Looking forward to the next chapter.
@pocketcat: It appears to me that the “crime-too-far” won’t be an issue, but of course I won’t know for sure until the end. It was touched upon briefly again and I got really worried, but it was only to diffuse it, so to speak.

No energy to run through my list of new words to select all the interesting ones, but today I learned that the multiplication table is simply called 九九 (くく), and I love it.

Appreciate the input @MissDagger ! It’s all more or less stuff I recognize but at the same time it’s hard to fully feel ok with it sometimes you know? Despite what I manage to do, I still fall over on my face with basics more than I’d like, haha. What can you do tho, just how it is I think.

Still kinda feeling that way, but I read a little over 7000 characters today, so that’s decent. This route really has been sprawling out. I like what it’s been up to though. Over time the culture of the island and its weird little eccentricities have been explored. There was even a sweet little subplot in a couple scenes where the main character was around some 小学生 and helped one of them a little, who was sad about the death of a relative. It’s been meandering, but in a way that mostly makes things a bit richer. 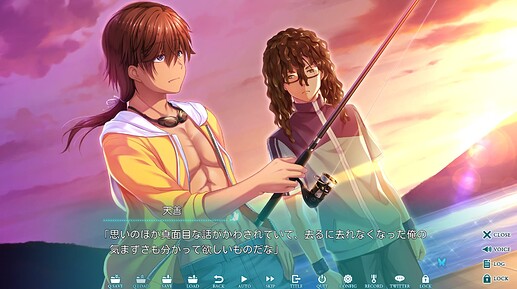 Hard cut to that image lol. It mentioned before that this guy puts seaweed on his head for… reasons so I think that’s what is happening here.

But while I do like Summer Pockets a lot, and I have those side books, the thought of another VN sure is appealing about now. It’s been a long journey with this one. I had thought about reading a small one as a breather after this was over but maybe I’ll consider if I want to take some days to alternate mining from one before the end. We’ll see.

Came across たる/たるもの today, an N1 grammar point that attaches to a noun, “used in relation to qualifications and requirements for a position.” Basically used to talk about what someone should do because they are X thing.

Lots of interesting descriptive new words today, I particularly like どん引き（どんびき), sort of “being left speechless” though with a secondary image of pulling a film camera back for a wider shot.