Problem with firefox on mobile

Hey, since a recent update on firefox on android, I’ve been having issues with certain words on wanikani. When I answer a word that uses っ it repeats the kana that comes after it. For example, when I enter 格好 it will appear as かっここう and I have to delete the extra こ. This does not happen when using the ime input typing normal Japanese in the browser.

It also does not happen when there is no character following the doubled consonant, for example 夫 comes out as おっと. But this is consistent and happens every time, and I’m noticing it a lot because I unlocked a bunch of vocab where this happens; 骨折、骨格、折角、etc. It happens every time with these words and it did not happen before this browser update.

I don’t know how much you care about compatability with every configuration of device and browser but this issue is very annoying and if I forget to check I will get an item wrong despite knowing the answer.

Have you considered using Flaming Durtles instead?

Flaming Durtles is now live on the Google Play Store! Grab it here: https://play.google.com/store/apps/details?id=com.the_tinkering.wk What is it? A native Android app that uses the V2 API. No web view, you have to create a V2 API key on the WK site and put it into the app to get it to work. Fully searchable and browseable subject database. Full support for lessons and reviews, including using and modifying your own notes and synonyms. Offline support with automatic sync whenever the device c…

Hey, I haven’t played around with any of those apps because last I’d seen they all have some kind of “redo” button if you make a mistake and I don’t even want the option. Either way, if there’s an issue with the functionality of the site, surely the developers would want to know about it? Also, the community forum is a total mess in firefox. I had to type nearly all of this blind.

Either way, if there’s an issue with the functionality of the site, surely the developers would want to know about it?

That’s a good point. Weirdly though, I’m using Firefox to browse the community right now and am not experiencing any issues. Maybe that’s on your end somehow?

I should point out that this is specifically using firefox on a mobile device; I have no such problems using Wanikani on my Surface or PC. Here’s a couple of examples.

No forum menu or options, and the title bar runs off the screen.

To get this menu to show up I have to scroll down the page and then scroll back up again. Also, randomly sometimes the box to type a reply in is placed beneath the phone keyboard and scrolling up or down the page will not move it, and I have not been able to consistently replicate this. There are other little things that would need to occur for me to remember to include them but the experience I’ve had using this forum on my phone have been mixed at best.

Edit: while writing this another came up, if I hit “reply” it does nothing. If I tap into the text box again it bizarrely asks if I want to discard my changes, but not in a way that fits on the screen:

I always have to hit “reply” or “save edit” twice to make it complete the desired action. The entire experience for me is sloppy like this.

No I’m also taking about Firefox on mobile

I’m actually used to get the menu when scrolling down only. I thought that had always been a feature.

As for the other issues, I’m not seeing those as well. Maybe other people can have a look whether they experience similar issues? If it is device specific, then finding that out will probably help to solve the issue.

What keyboard app do you use? I use swiftkey.

In FD the undo button is customizable and is in fact turned off by default. There are quite a few options in FD which, if used unwisely, can be harmful to the learning process: Undo, reorder, Anki mode, etc. They are all disabled by default, and hidden behind an ‘Advanced settings’ button that gives a warning about this.

Ah, seems that I was blind. Thanks!

This is my keyboard, and this is it covering up the reply menu as I write this (you can see the blue at the top of the keyboard layout):

Sometimes messing around with scrolling will fix it as it has right now or I would have no option to upload that screenshot. These annoyances aren’t really what this post is for though, I dont really care about the robustness of the community. I do care about my input for reviews though. Maybe I’ll have to turn to some app.

I seriously can’t be the only one having this problem. It’s been a couple of weeks now and it’s really pissing me off.

The problem used to happen for me half the time. I don’t usually do reviews on mobile but when I do, I use the Japanese kana keyboard on my phone which prevents a lot of mistakes.

I have a similar problem with Firefox on my phone.
Whenever there is a あ え い お う it messes up the word somewhere.

So taking your example, 格好 comes out as かっこおう. Maybe because of the う at the end? Only happens with Firefox on my phone and it’s been that way for a long time. I rarely do reviews on mobile though and when I do I use Chrome where everything works fine, so I don’t know exactly when it
happens.

Using the kana keyboard is kind of tedious since you would always have to switch back to normal keyboard when you type in a meaning.

My solution to this was to install, and learn how to use, a 4x3 flick keyboard for everything on my phone. It’s quite a steep up-front investment if you’re coming from a qwert layout, but if you’re planning on using Japanese input for anything else on your phone, it makes a lot of sense.

Using the kana keyboard is kind of tedious since you would always have to switch back to normal keyboard when you type in a meaning.

I have 4 different “language” keyboards installed, and even then, switching for between English and kana input has never been a problem.

I’ve just started using chrome in the Hope’s of alleviating the problem, but like I said from the outset this particular doubling issue happened precisely when firefox overhauled their visual layout on mobile recently. As you can see from that last screenshot, 悪因悪果 ends with the double か with nothing following it. The only time it’s worked without the doubling since this update is when it goes into an altered hiragana like with an ゃ、ゅ or ょ。 Say, 仏教 which is a recent vocab addition - it doesn’t happen. But it does, every time, repeatably with say 仏典。

Another thing that happens often with wanikani’s conversion that never happens with my Japanese keyboard is that I can type too fast for it to keep up, and it will make a consonant disappear out of nowhere. I’ve gotten things like 学生 wrong because it read “がうせい” for example. This happens a lot but I can’t be sure that the cause isn’t me just not pressing the keystroke properly so I’ve never complained about it and just check every answer.

I have to agree though with the keyboard switching. I have 2 other language keyboards installed and I build my own vocabulary deck by creating flashcards and switching between the two while doing these is a bit of a chore. Doing this for a pile of a couple hundred reviews that happen to fall on the same time would, for me, be a nightmare.

I’ll see if the site plays ball better with Chrome for now. I like Firefox but dealing with this is annoying, nothing frustrates me more than getting marked wrong when I know the answer.

My iPhone/iPad usually switch from English to Japanese and back with one tap, but for some reason, on random occasions, they decide to go English > Emoji > English > Japanese instead.

Had a couple of reviews in my last batch with words like 欠席 and 出席 and it did not happen using chrome so I guess I’ll have to use chrome for my reviews from now on. Oh well.

I have Finnish in there in addition to those, and feel like it’s always random what I get.

I guess my built in keyboard is just bad then. I can also switch back to alphabet input with a single tap, but then I get this keyboard that handles like an old phone. So I have to change the software for the keyboard, which takes a few seconds and is just plain impractical. 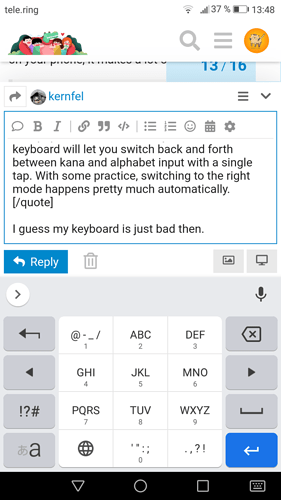 But using the kana input fixes the issue with firefox.

Eh. Can you not use that in flick mode? (drag left/up/right for e.g. Q/R/S, down for the digit, as you would in a 4x3 kana keyboard)