Does anyone have any tips on when to inflect up or down or which syllables should be emphasised when speaking Japanese?

I remember seeing a video a few years ago by a native demonstrating all kinds of different tones and inflections with the sound wave profiles included.

I’ll try to find it after work.

EDIT: This was the video I was referring to. Sorry if this wasn’t the element of speech you were imagining.

There aren’t many ready made rules for pitch accent, which is what you’re talking about. There are a couple of patterns that are possible (4 if I’m not mistaken), and each word has one (or just to make it more fun, more) of these that applies to them. There are some patterns for groups of words that at least let you eliminate them in a batch, but it’s pretty much a per-word study thing. The even sadder thing is that this all depends on where exactly in Japan someone is, though I’d assume that there’s a set for standard Japanese, that would be a good starting point.

If you are really serious about it, it’s something that basically needs to be memorized alongside the words, not unlike their ichidan-godanness.
Dictionaries have about a dozen ways to show this pitch accent, the 2 most common I personally know are these sort of diagrams: 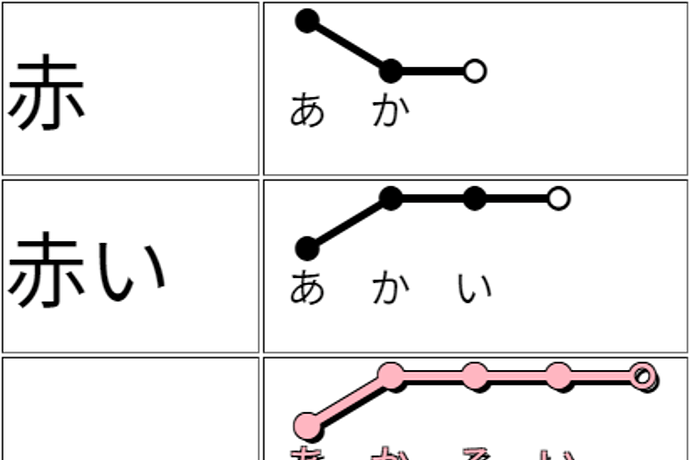 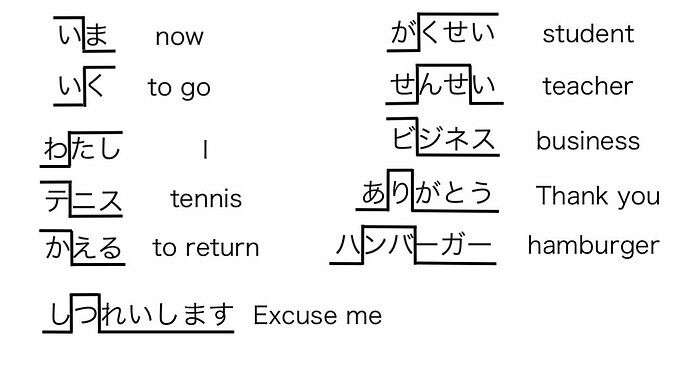 image1280×720 61 KB
But in some cases you might just get an index or name of the pattern you need to apply to the word.

I personally don’t (yet) worry about this myself, but I’d honestly try to internalize the forms these can take and then it will be easier to categorize each word in your head.

Wanikani has a few scripts that lets you study the vocab words it gives you with the pitch accent, for example:

As a result of the discussions in this thread, I made a userscript that displays the pitch type for a given vocabulary reading. The data has been automatically generated from results on http://www.weblio.jp and will auto-lookup any new ones WaniKani may add in the future. Script: Requirements: A userscript app for you given browser, tested working with: Tampermonkey (Most Browsers, Preferred) [a20c7a57763c9a189a09e9cac19e7481] TODO List: -Check if pitch info is different for secondary r…

Also, there’s Dogen’s youtube channel who specializes in this, and runs a pretty popular series (though you will need to pay for his patreon to get the full thing).

I personally wouldn’t yet worry, it’s not something, that you need to learn if you want to be understood, unlike sheer vocabulary and grammar, but if you’ve got the time, don’t let me stop you.

Ah, I didn’t take this to be about pitch accent, but I guess it’s worth clarifying.

Was the question about pitch accent? Or sentence level emphasis and intonation?

I don’t think it can be safely ignored, but it is more important to be able to hear pitch changes, and replicate well.

The discussion is in this topic – Pitch-Accent Awareness Corner

The diagrams in the script is mainly for Tokyo, and at word level, but it also changes a little in phrases – Tips for Japanese Pitch Accent · GitHub

Also, it is just one amongst many phonetics issues that can happen.

I took it as pitch accent, because he mentioned syllables, not words.

Yeah, I can see that. I focused on the title’s use of emphasis and inflection, which are unrelated to pitch accent.

I suppose it’s possible the OP just didn’t know the term pitch accent, or the fact that something like English stress accent doesnt exist in Japanese, leading to the confusing wording.

I also was wondering if this topic was intended to be about pitch accent or some other aspect of inflection/emphasis. I’ve now committed to long term Japanese study (I live in and work with an organization in Japan), so pitch accent is now something I’m trying to learn alongside vocabulary. When I’ve asked about it, my Japanese friends have told me pitch accent is not always the most important thing in the world and that there can bit a bit of leeway (especially, like mentioned before, regionally around Japan; I’m learning Tokyo Japanese, as most people are), but definitely, if you go to the extreme of completely throwing caution to the wind and you’re not even trying to mimic how Japanese people talk, it can be difficult to understand (I’ve experienced this personally in small doses hearing other foreigners speak Japanese). People around me I trust (who aren’t just giving me tatemae or excessive politeness), like my really strict Japanese teacher, have told me my pronunciation is really good for someone who arrived in Japan less than a year ago, and it seems like the big thing is being aware of pitch accent and then from there, universal to all languages, with that knowledge try to mimic in detail how native speakers actually say things (don’t just read the words on a page and try to guess the pronunciation).

Yes it was about pitch accent but I didin’t realise that’s what it was called!