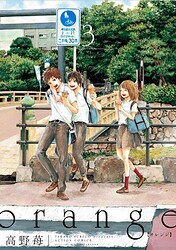 That was a beautiful chapter. It’s worth reading just to get to this part.

Very sweet chapter, and I am glad that they are showing that saving Kakeru is not just about him and Naho getting together. That might help, but it’s also obviously a lot more complicated than that.

I’m also wondering now when Azu and Taka-chan will get involved … I hope that the fact that they’re not in the loop at the moment doesn’t divide them. And I also hope that if/when Naho tells them (at least a little of what is going on, maybe not the time travel part), that that doesn’t end up alienating Kakeru and making him feel ganged up on. Even when it’s well-meant, it’s not necessarily pleasant to have literally all your friends talking about you together behind your back.

And now I’m finally doing my homework, too! Any and all assistance appreciated.

You may already know this part, but mentioning just in case:

Putting the pieces together:

The next highlighted portion begins with the four characters on the prior panel:

Worded differently: “I was anxious about what Kakeru would think, and I couldn’t do it.”

Note that here, I’m seeing で as the て form of だ. I don’t know if that’s correct, but if so then this reads essentially as two sentences joined together.

Note also that this is more like “What will I be thought of by Kakeru”, but I made it passive in my translation to try and make the English flow better, rather than trying to be closer to the Japanese.

As you noticed, the first highlighted portion is a call back to page 72. (Don’t you just hate it when the unknowns gang up on you like this? It’s like the first unknown was so popular that they went and made a sequel.)

This time, we have:

In other words, “The reason I couldn’t hand it over isn’t what I thought it was. That wasn’t really the reason.”

I got a bit lazy on this last one (as it’s a fragment of a sentence), but if you don’t know と＋させる then that’s another to read up on. It’s a way of saying the phrase or noun before it can be considered.

Let’s put the three together, and the gist of it is: “Just, I want to tell you, I want you to understand my feelings, that you are considered as necessary.”

Wow, thanks for breaking that down for me!! There was a lot going on there that I didn’t follow. (と＋させる is new to me. And I guess I got those middle two fragments on page 82 sort of turned around in a way that had nothing to do with the actual grammar of the sentence.

I’m also wondering now when Azu and Taka-chan will get involved … I hope that the fact that they’re not in the loop at the moment doesn’t divide them.

I felt like the last page of this chapter very much shows that they are the loop on a lot of it. The bigger question is Hagita.

I keep being so happy I am back to reading this, because the story is amazing. In many ways I look forward to being able to reread this in a couple of years, when each chapter doesn’t take me like 2 hours to read, and when I have an even better understanding of grammar so I can piece together things in a way that is more true to its actual meaning rather than a vaguely “I think this is it” and then turn out to have completely missed the nuances or even the complete meaning…

Reading @ChristopherFritz answers to @MaraVos’s questions made me realize I kinda didn’t get those sentences fully. But I thought I understood them well enough that I didn’t need to ask questions… Only I was not getting the true nuance at all.