It is? It wasn’t clear from the trailer at all.

I glad I’m not alone! I felt so deceived! The part where one guy is trying to get another guy to shut up is because zombies are coming for them, and the syringe shown is used to inject people to make them zombies!

I passively listened to three tracks from かがみの孤城 (74 minutes) while I was working. I admit I had my attention elsewhere, so I only caught scattered words and phrases here and there. I couldn’t tell you what’s happening. Something with a castle in a mirror?

and the syringe shown is used to inject people to make them zombies!

That’s not how zombies work. This movie is all wrong!

Something with a castle in a mirror?

I think you got the gist all right

admittedly I don’t know much more than that though

YouTube suggested a random video about food shopping in Hokkaido so I thought I’d watch it.

Didn’t think I would understand much of anything, but I could understand quite a bit more than I had anticipated (the words I understood mostly being various types of food, trust my brain to only latch onto food-words)

Usually I’m not very interested in listening, and so I just… don’t. For Japanese, I usually talk to two people per week and take 1 or 2 lessons per week, and I feel that this is pretty helpful for my listening already. I often shy away from listening to Japanese stuff because I think I am missing too many words and therefore won’t get enough out of it. But for this challenge, I figured I should give it a try

What I listened to in July:

I already started the month well ahem by not listening on Aug 1st. It just didn’t fit somehow. Anyways, I decided to watch the Flying Witch anime this month. I read the manga (up to vol. 9, I think) and so I have a lot of episodes I can watch before catching up to that point. The language difficulty very much depends on the situation (casual speech for example), but usually it is ok, maybe about 70-80% on average. Looking forward to the dialect

Work has been very busy and I haven’t had a proper break for ages. I haven’t taken more than 2 consecutive days of holiday so far this year so I’m a bit worn out and its starting to show!

(This is entirely my own fault for being rubbish at taking time off - the company I work for is lovely!)

August 2nd
What did I listen to?: Obey Me! Boys in the House Ep 3
How much time did I spend listening?: 16 min (plus some extra time for replays)

Why was I smiling the whole entire time, like my face hurts

They’re so cute, I love the bunny ears punishment. Pyon!

They look so cute on Ayme-san especially lmao, his tiny little “pyon”

I love how he himself was like, wishing he could have worn them a little longer

Just before reading aloud, I watched Hunter x Hunter (1999) EP.1 (no sub), and I found it understandable. I guess it’s from knowing enough vocabularies and some grammar, and half of being able to notice new words, but surely I missed many words relevant to the story. I want to be the level to understand more, at least literally. Also rewatched the remake (2011) EP.1, at the beginning, to compare.

Yesterday I watched となりの怪物くん of 1 episode. Of this one, and also Hunter x Hunter, I rewinded a lot. Well, it doesn’t matter really. With sub and without probably serve different purposes.

The choice of next one with sub is probably Dr. Stone, as it is not too easy, but doable.

I listened to several of Yuyu’s podcasts today while cleaning the house and running errands. I’m oddly tired today so might go to bed early and not listen to anything else.

I just watched some let’s play stuff as usual but like, more than usual I think? So yay

stamina increasing! I do need to get back into stuff with actual ongoing plot but that just requires so much more mental energy

I’ll get there eventually haha

1st - Over the moon, Harry Potter and the philosopher’s stone chapter 12

I’ve noticed that I do go back to the same stories, music or the same audio again and again. Mostly this is for a better understanding of the grammar etc as I tend to pick up more each time I watch or listen to something. Some times this is just my go to for certain things, like Japanese music will be from the music I have access to which if I’m driving is all the music in my phone (Gackt and Steriopony atm though I have found a few other artists I want to get music from). The short stories on repeat are because I’m listening to the then reading them then sometimes re-listening to them while reading them again to see what else I can pick up from them.

I’ve been doing a lot of reading alongside this challenge and although some days have been really difficult to force myself to actively listen (since I was only doing listening around 3 days a week before unless it was music based), I’ve tried to complete something everyday. I do think that once this challenge is completed, I’ll go back to my old routine of listening 3-4 days a week and reading the rest of my free time. I have noticed that my listening has improved to the point I can pick out most words/ particles while listening even if I’m not aware of what the words mean.

Today I watched the Pokemon Presents that aired earlier today, I think I understood quite a bit, well, enough to get what was going on.

First of all, yay! I finished the textbook

Last year when I took the N2, I got 46/60 (76%) on listening. Even though the scores aren’t really comparable because exam result uses scaled scores instead of raw scores, I guess I can say I’m probably roughly at the same level as back then. Which isn’t bad considering I haven’t been practicing listening much. (Only did half of July? whoops xD)

For those of you who are familiar with the jlpt listening section, 問題 4 was the type of questions I struggle with the most: “one person says something - pick the most suitable out of three responses”. Ugh

If only it was possible to listen twice.

I finished textbook, so now I don’t have to bring it with me. Yay, mission accomplished :3

I listened to 2 more Core Words videos from JapanesePod101 while I was writing today.
I meant to listen to some Nihongo con Teppei today too, but I went out for dinner with friends this evening and now its a bit too late and I’m sleepy so I think I’ll save it for tomorrow!

August 3rd
What did I listen to?: Obey Me! Boys in the House Ep 4
How much time did I spend listening?: 14 min-ish

This one was a bit short, but full of cuteness xD How the h e c k does Ayme-san manage to look so darn adorable in like…safety glasses and a face shield, I don’t understand 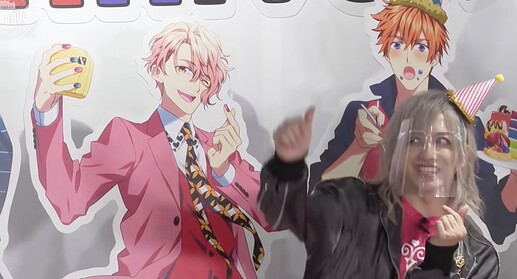 Look at them
There is no difference

[Why doesn’t Discourse leave a space between summaries and videos, like what is that about]

Hey, I’m still around kind of! I’ve been posting elsewhere about finishing reading スマホを落としただけなのに, which also means I’ve finished listening to it! Saw big improvements there, and I think I’ve made the most noticeable listening progress yet through that project.

I also was too tired and headachey for my visual novel today so I went ahead and watched the movie based on it in Japanese! No subs at all because I didn’t have Japanese, no surprise there. Overall, I did fine. Comparing an audiobook and a movie sure emphasizes the issues I have at times when people slur more, or yell more, etc. Turns out my listening comprehension is pretty good when things are steady and clear, but real speech is an issue, meaning I really do need to probably build up more tolerance for ambiguity and throw myself in the deep end of language more the way it’s used.

@softlyraining Hey I can already talk about the movie, just bringing it to this more relevant thread.

If anyone cares for more developed thoughts, I put them in a Letterboxd review, but overall… the movie was about as cheesy and silly as I expected, though luckily in a way that landed in quite watchable moreso than boring. There are fairly heavy changes to avoid all of the outright sexual content in the book, which distorts some reveals and generally the rewrites make things land a little worse or make less sense. The tone of the villain’s behavior (and really the whole tone) is so different, making it harder to take seriously but goofy fun in its own way, if you’re into that. It’s unfortunate that the characters are flattened to have even less depth through more one-dimensional interactions, other than one who is given, uhh, complexity of a sort through a pretty bizarre and pointless change.

Overall… an ok time killer? Not too hard to understand, relatively, but I read the whole book first so I have about as much advantage as one could have.

There wasn’t too much visual artistry going on, but enjoy this image that pretty much sums it all up: 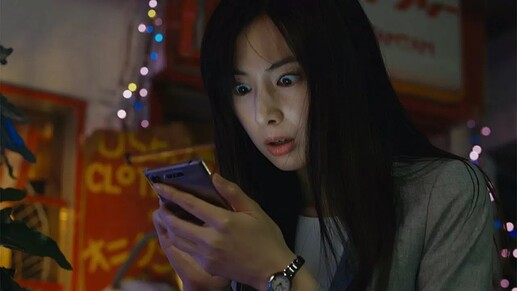 Yesterday, I watched some more anime, and continued reading JoJo for 7 more chapters. The truth is slow or fast reading depends on how much to want to look up or focus on vocabularies… It’s best to know vocabularies from advance, probably from elsewhere so as not to spoil the story.

But for JoJo, I wrote my thought summarization afterwards (in my Git).

Also, yesterday, I had allergic rhinitis, that didn’t only look bad, but also debilitating; so I took my afternoon off. (Also took a rapid antigen test, which is negative.) Today, it’s totally cured like nothing happened…

I have reached a milestone! 200 hours of listening done this year!

This puts me halfway to my yearly goal of 400 hours so I am behind, but no so much that I don’t have a chance.

Today was more Yuyu and Prince of Legend. Prince of Legend continues to be fabulously wacky. They keep playing covers of 80s pop songs and “99 Luftballons” is an interesting choice to play over romantic scenes, gotta say.

If anyone cares for more developed thoughts, I put them in a Letterboxd review, but overall… the movie was about as cheesy and silly as I expected, though luckily in a way that landed in quite watchable moreso than boring.

Why do I love trashy crime so much. Though getting rid of the sexual elements is…interesting. That certainly would throw a wrench in things, like…literally all the killer’s motivations, means of coercion, and the final ‘reveal’. Errr…what.. I will say that at least one of the male actors has been pretty close to naked in at least one thing I’ve watched, and the lead actress was also the lead in the film adaptation of Dear Friends, which unless they also wildly changed it from book to movie, has high school prostitution as a main plot point. Then again…I never saw the movie as I hated the book.