This is a thread for breaking down Japanese sentences into diagrams.

You may or may not be familiar with sentence diagraming. It’s a practice that helps you break down what’s connected in a sentence.

In a tree diagram, a sentence is divided into two parts: a subject and a predicate. They are made up of noun phrases or verb phrases. These are groups of words that include a noun or verb and any words that add as modifiers. The subject is a noun phrase while a predicate is usually a verb phrase. The noun phrase A big dog is comprised of the indefinite article ‘a’, the adjective ‘big’, and the noun ‘dog’. The verb phrase jumped over the fence consists of the verb ‘jumped’ and the prepositional phrase ‘over the fence’.

these components… descend from the subject and predicate in the form of lines acting as branches. This continues until each noun or verb phrase is broken down into its simplest parts. In the end, a sentence diagrammed in this style should look like a vast tree, with the subject and predicate acting as the trunk and the sentence modifiers standing in as the colorful and complex leaves that give it personality.

Here are some English examples that increase in complexity: 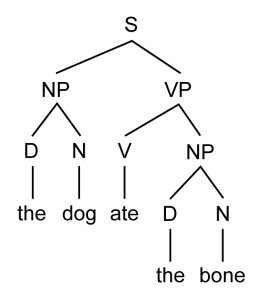 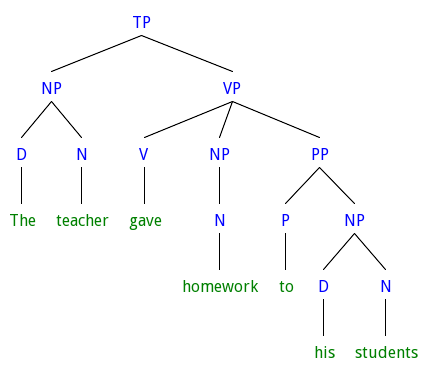 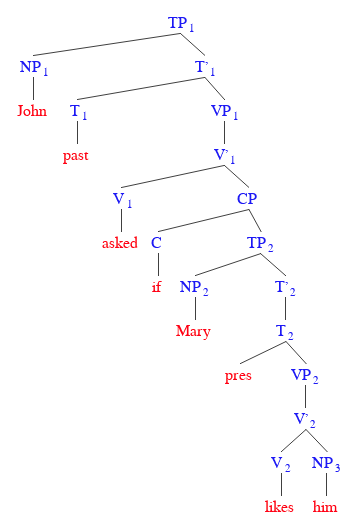 We used to do this in one of my Japanese Linguistics classes and I found it quite helpful. Maybe it’ll be helpful to you as well. Feel free to suggest sentences or draw trees of your own.

Here’s an example of a Japanese one from my class. It’s in romaji. You may have trouble with computer tree generators being able to understand kanji and kana. 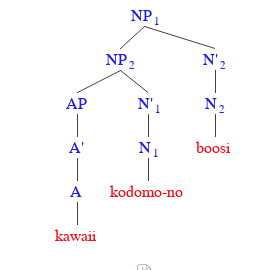 Post to be edited later for additional instructions on how to make trees. Critique and requests are welcome.

@IzCreature My brain’s going a bit foggy so probably stopping here for today.

Well, it’s kinda ambiguous, because it could be either.

I’ve always been interested in these tree diagrams! Is there anywhere that offers a fairly simple background on them? I’m afraid I don’t know anything aside from noun, verb, and prepositional phrases atm

what are these things with primes attached to them? A’, N’…

The phrase yes, but not the diagram itself. If it were a child’s hat the branch would split to the right instead of the left.

I will try to find something. I wasn’t having much luck earlier, so I figured this was a good stopping point

Oh dear, I said tree diagram because that sounded right but what Im familiar with looks like

that is quite different

Oh, man! I used to love diagramming sentences in elementary school (and I remember getting the stink-eye from other kids because I enjoyed it!).

Haven’t thought about it in years. I’d never considered doing it with Japanese. Very interesting.

Off topic, but your blurring the furigana in your post blew me away. Very cool. I’d never seen that done before. I learned about the ruby tag on these forums but how did you create spoiler text for the furigana?!! Did you have to use inline CSS?

how did you create spoiler text for the furigana?!!

Just use spoiler tags inside the ruby tags.

I go the easy route and use this userscript

General script installation instructions IME2Furigana What does it do? The script targets the reply textbox of the WaniKani forum. It adds two functionalities: Furigana markup Writing <漢字>[かんじ] results in 漢字(かんじ), while writing <漢字>{かんじ} results in 漢字(). The markup is the same as in the Easy Furigana userscript by @Kumirei. IME input to furigana markup The script takes what you have entered in your IME and converts it into furigana markup. Example: you write ふりがな, then select 振り仮名 …

Despite the first line, I can’t recall any non user generated issues with it

Despite the first line, I can’t recall any non user generated issues with it

You are right, it is probably tested well enough by now. I have removed the warning.

Just use spoiler tags inside the ruby tags.

Of course! BBcode inside html tags intended for a markdown preprocessor.

I thought Japanese was complicated. Whatever parser this forum uses continues to amaze me.

I go the easy route and use this userscript

Just installed. Love it. Thanks!