although if it is a head trauma issue, yeah people like that can be hard to reason with unfortunately.

Yeah the kittens are gettting a bit adventurous now they’re just about 5 weeks old, we’ve been looking after them since they were 9/10 days old maybe

I love FFVII so much, been waiting on this remake for so long, I spend a good amount of the game just staring at the scenery, Midgar looks so good, as do all the characters and the battle animations…

although if it is a head trauma issue, yeah people like that can be hard to reason with unfortunately.

I’m looking in to the possibility of moving, I can’t live like this!
I wanted a bigger place with a yard for my animals anyway

These, minus two cats (rehomed, been planned since summer, found a way in January. Live with my best friend <3 ) And I lost a dog (mentioned) and a chinchilla (the black one)
Have all the rest, + lots of bugs and breeder mice/rats =P
https://community.wanikani.com/t/pet-photo-advent-calendar-2019/40557

Am slowly but surely catching up. However, once again I need to ask for help^^" Page 25:

I can’t understand the sentence from 前 and onward. Can’t even begin to parse"“” I feel like I’ve seen the kanji in the book before, but I’m not exactly sure.

I’ll back up a bit before the 前 for clarification:

- sitting room
の - possessive
ごうし - iron grille
の - possessive
- in front (of)
まで - up to, as far as
いって - 行って, the て form of ‘to go’
いません - 居ません negative form of ‘to be’, here acting as an ‘ing’ type auxiliary with て form
よ。- emphatic sentence ender

(Akita-san) isn’t going (right) up to the sitting room’s grille.

I expect most of your trouble would have been with the end of the sentence not having the いs in kanji form (I had to have a good think to sort it out myself).

I expect most of your trouble would have been with the end of the sentence not having the いs in kanji form (I had to have a good think to sort it out myself).

Yeah, it seems so^^" Thank you, it all makes sense now haha

いません - 要ません negative form of ‘to need’, here acting to form a compound with て form

Can I just disagree with you slightly, sorry. 要る is a godan verb so the conjugation is いりません not いません. 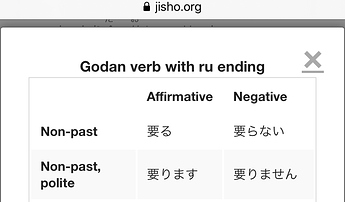 I read this simply as the normal いる helper verb that forms the progressive tense. So いっていません meaning “isn’t going”.

So I think the sentence is more like “Besides, Akita doesn’t go up in front of the iron grill of the reception room”.

This fits with the next sentence: “Because Bobo didn’t bark”

It seems a bit odd that he uses present tense rather than past tense, but I guess we might do the same if we were talking through the clues and trying to solve the case in English.

Thanks for the correction (though ‘doesn’t need to’ makes more sense to my English brain) - will edit to suit.

@Chaly - please see Micki’s comment above and my revised explanation above that. Cheers!

This is maybe getting into the subtleties, but I think what the story is saying is that he could get the fish without entering the room, by standing at the window and putting a fishing rod through the grille. But he then gives two reasons why this can’t be true. 1 - it doesn’t explain the breakage of the bowl, and 2 - Bobo’s detective work indicates Akita didn’t come to the window.

I understood all that from your correction of my conjugation, but as you noted, it is odd that it is in present tense - that is what threw me.

I found the present tense there weird too, especially as the rest of that discussion talks about the case in the past tense - otherwise I would agree wholeheartedly with Micki’s suggestion that they’re recreating the case in the present, though I still think that’s the most likely explanation.

The only thing I can think is that it’s referring to the lack of his presence there generally, rather than at the specific time of the incident. After all, the smell on the ground isn’t nicely restricted to that window of time.

I’ve always found tense a little confusing in Japanese though. Another possibility is that the use of the continuous here gives it a “has been” sense? Using 行っている seems a little weird otherwise anyway?

@Naphthalene, I don’t suppose you’d have time to give us a hand? You’re always good at explaining tenses… The sentence in question is here, and the context is that they’re the discussing the fact that Akita, a suspect in our crime, can’t have been near the crime scene (the iron bars mentioned are in front of the door to the room) because Bobo the dog didn’t pick up his scent there. No worries if not, just thought I’d ask

I would probably need the beginning of the conversation (i.e. the previous few sentences) to be sure, but yes, based on what you said, it sounds like they are recreating the scene. That happens a lot in criminal drama as well. Just making up stuff: “He goes there, does that, then drops the thing that leaves a mark on the ground, but then he doesn’t pick it up, why? Because bla”.
Again, I’m not 100% sure, but that’s definitely a possibility.

Ask and you shall receive

Ah, okay, then no. This is a different one. It means that he hasn’t been there and still hasn’t gone there yet. So the ている is here to give us that continuity. If he had been near those iron bars at any point, his sent would have been detected by Bo-bo.

I knew you’d have the answer

It’s the “already / not yet” usage talked about at the bottom of this article, right? I was trying to fit that in (that’s where my “hasn’t been” suggestion came from), but I wasn’t sure whether the sentence needed to more explicity involve a “yet”.

Yes it’s that one. Except that in English, “yet” makes it sound (to me) like it will eventually happen, while the Japanese doesn’t necessarily hold that nuance. In the current case, that person may very well never get close to those iron bars in their whole life.

Yes, exactly - that’s why I wasn’t very confident, because in English “yet” adds a very definite nuance which wouldn’t fit here.

You’re the best, thanks for giving us your time

Hi all, I don’t know if anyone is still reading this but I’m trying to catch up and I’m a bit stuck on page 28. The bit in the middle has me stumped - おしえたのた

Yamagatasan picked up the golf ball - then what? It seems like a form of おしえる but I can’t seem to make sense of it.