Following up on my previous thread in the feedback section: Differentiate Reading & Meaning - #24 by tls
I am struggling immensly because the Reading and Meaning questions use the same colour background.

It would turn WaniKani from nearly useless to absolutely perfect for my use. 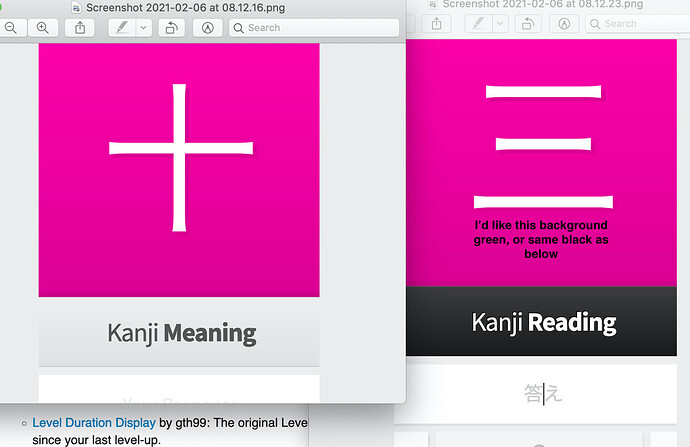 PLease and thank you

But you’ve acknowledged in your graphics that the reading has black there (as opposed to the meaning which has light grey) - that is the colour difference you are requesting. If the whole background is changed to black, you are not going to know if it is for a kanji or for a vocab item.

The function of the background behind the character itself is to tell you what kind of card it is - blue = radical, pink = kanji, purple = vocab.

For vocab cards which are single kanji, it’s important to know the difference between them - for example 山, which will also come up during level 1, is さん as a kanji card, but やま as a vocab card.

さん as a kanji card, but 山 as a vocab card

I’m guessing auto-kanjification or something interfered…

さん as a kanji card, but やま as a vocab card

Could have sworn I’d proofread that…

As mentioned, that’s going to cause you a lot of problems as soon as you start learning vocabulary that are the alternate readings for the kanji and vice versa. The pink versus purple is how you know if WK wants the kanji (pink) or the vocab (purple). Without the colour variation, both cards will look exactly the same but the answers will be different and you will have no way of knowing which to type in.

Without the colour variation, both cards will look exactly the same but the answers will be different and you will have no way of knowing which to type in.

Which OP seems to struggle with, I get that (they mentioned in the other thread they don’t pay attention to the words at all). So if words aren’t going to work, theoretically you would need FOUR different indicator colours:

or something. It would be incredibly niche for a userscript but might work.

Yeah, you would need 5 different colors, when you factor in radicals.

Radicals could safely stay blue I think, since they only have one card?

If that’s the frame work then don’t we just need two colors? The two new ones. Anyway…

I can imagine a script that lets you choose your own colors wouldn’t be that niche, you just would not have many people separating item types into different colors.

I’ve felt bad pointing OP to a script request without actually offering to make such a script. But you can now check out my attempt here

After more discussions on distinguishing Reading/Meaning questions during reviews and pointing to a non existent script, I figured I might as well at least produce one. Greasyfork location This script replaces the word Reading with a chosen alternative (default Japanese) and Meaning with a chosen alternative (default English). It does not change radical items. Starting with version 1.4 the script also works for the lesson quiz. [meaning_replaced] [reading_replaced] Starting with version 1.…

Note that it does not change the pink/purple of the kanji/vocab part of the review screen, mostly because that part of the screen does not indicate whether it’s a reading or meaning question. It should still be possible to alter that background color, but it requires more logic and messing with the layout (usually the less you mess, the more stable the script is upon changes to the main page).

I’m so used to the default wording and colors that this script really woke me up - but that won’t hold for more than a few review sessions. I won’t properly know if it does anything for my own confusion until much later.

How did your script work for you? any new text color scripts out yet?

Am actually still using it! I’ve gotten very used to it, but the Japanese/English indication is still much clearer to me than Reading/Meaning.

I’ll try it then, thank you. What I was originally looking for was to change the text color of the kanji itself. But maybe this way will be less distracting.