Close, near, vicinity, neighborhood and all that

I’ve been having serious déjà-vus for quite a while now. Just this morning I learned 近所 and it seems like the tenth or so word in as many levels that revolves around the general concept of close, near, vicinity, neighborhood, area and you name it. 付近, 近い, 近く, 辺り, 辺 … is closeness like a super-important concept in Japanese?

I wouldn’t say it’s particularly important, at least from what I know. It’s probably because you learned the 近 and 辺 kanji relatively close together (I think they’re only two levels apart from what I remember). Similar words tend to crop up after learning certain kanji because there are a lot of vocabulary words that use said kanji.

I’m not an expert on this, but as far as I know, 近い, 近く, 辺り, 辺 have different uses depending on the context (and 近い is adjective, 近く is adverb, 辺 is noun?). I’m not really sure about 付近 since I never encountered this word frequently that it sticks in the mind. 近所 is closest to the term neighbor. I don’t think Japanese have particular affection to closeness, for me its much like in English that we have different words for proximity (close, near, vicinity, proximity, neighbor, etc)

I see 付近 used like this a lot. 扉の付近に立ってはいけません “Don’t stand near the door.” But of course, there are broader ranges than that as well.

近所 is closest to the term neighbor.

I think “neighborhood” is probably a better match for 近所. You could say 近所の人 for neighbor, as in “someone who lives in my neighborhood.” The person who literally lives next door would be 隣の人 or 隣人.

EDIT: And just on the main topic, we have many words for this in English as well. Proximity. Vicinity. Nearby area. Environs. Depends how deep you want to go.

I see 付近 used like this a lot. 扉の付近に立ってはいけません “Don’t stand near the door.” But of course, there are broader ranges than that as well.

Is this term (付近) used more frequently in conversation or in writing? I’ve probably never heard of this in all the things I’ve listened to, but then I guess that is limited to slice-of-life anime and drama cds

(Or I’m not listening effectively enough)

I usually see it written on signs. Imagine a sign near the door of a bus or hall. They might phrase it a little gentler than I did on public bus or something though.

I see, thanks a lot! I’ve been wondering where this is used since I’ve encountered this in WK and this is enlightening.

I googled around a bit too and saw this as well. 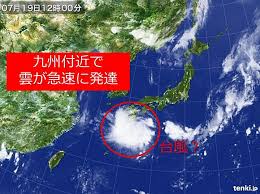 That kinda means “There is a rapid growth of clouds in Kyuushuu area” right?

I guess then that 付近 is used more in a formal/official setting than in conversation.

I wouldn’t say it’s particularly important, at least from what I know. It’s probably because you learned the 近 and 辺 kanji relatively close together (I think they’re only two levels apart from what I remember).

I suppose that would be the point, yes. I find it generally a little confusing that particularly vague concepts seem to have so many ways of expressing them; another one I noticed is “soon”. Of course it would be quite the same in many other languages, but still, that doesn’t make it easier to learn all those words and keep them apart, particularly since sometimes the expected wording varies slightly. I have had a hell of a time with 一生 and 一代 - I can never keep them apart - and in fact, wasn’t there a third with a somewhat similar meaning?