A WaniKani Story: What IS So Great About The Number 951?

951, is this a special number, does it have any specific meaning besides a numeral amount? Can we learn something from this number? Well I decided today, we as a group should do some deep digging learned something new (…well, I’ll do the deep digging and you’ll be along for the ride)

As you would probably know that the numbers 9 5 and 1 alone in Japanese are 九 五 一.

In Japan In year 951, a monk in Kyoto gave the sick umeboshi tea… and you know what? It miraculously made them feel better. Thus, the emperor began drinking umeboshi tea every New Year’s Day for luck. 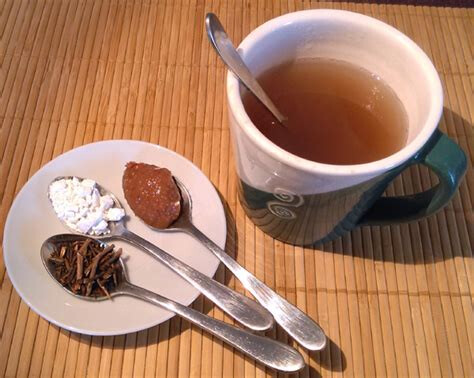 It later became a tradition known as obukucha. Nowadays, kelp has also been added to this intense infusion, giving it a salty kick… which is true I’ve had it. The drink remained popular, especially in Kyoto, despite its sourness, perhaps because of it. 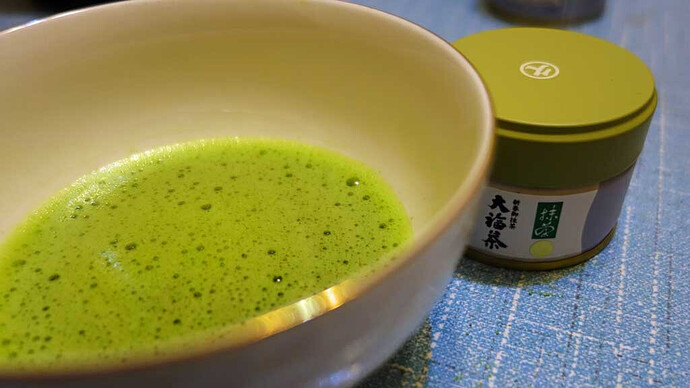 Another interesting bit about year 951 in Japan: The Tenjin Festival in Tokyo and the Gion Festival in Kyoto are ancient events that is said to date back to the year 951, when purification rites were performed to protect against the infectious diseases which were rampant in the hot and humid summer months. 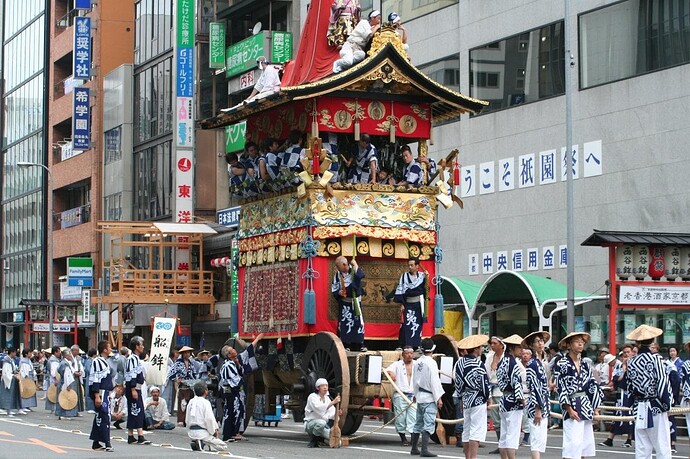 Let’s toss it up and check what happened in 1951 in Japan:

Seems like a bunch of fires… stuff exploding and all that jazz, but on September 15 – An extreme Typhoon Ruth, a flood swept and landslide occur in Iwakuni area, Yamaguchi Prefecture, tidal wave hit in Satsunan Islands, according to Japanese government official confirmed report, in total 943 persons were killed, 2644 persons were wounded.

It’s also the area code for Riverside, Corona, and Temecula in California… and Riverside, being an area I dislike being my ex-girlfriends family is from this place… and yeah, daikirai!

To determine if 951 is a happy number or unhappy number, we square each digit in 951 and then add those numbers together.

Then we repeat the process for the result until either the result turns to 1 or we realize it will never be 1.

If it becomes a 1, then it is a happy numbers. Otherwise, it is an unhappy number.

Here is the math to make it more clear:

We kept doing the math above and it just started looping the same numbers and never got to 1. Since, we did not get to 1, 951 is an:

…if play with some numerology of 951 this is what we get:

What is the definition of 6 in Numerology?

The number 6 is the embodiment of the heart. It represents unconditional love and the ability to support, nurture, and heal. It is a powerful force of compassion and empathy and its warm light is a beacon of hope. Its role is to use its heart and soul to be of service to others.

The 6 in Numerology shines in partnerships of all kinds but especially emotional ones. Its empathy makes others comfortable letting down their guard and being open and honest about their feelings which, in turn, allows it to understand and provide the help that’s needed. We could all use someone in our life who manifests the devoted energy of the 6.

Strengths of the number 6

Supportive : When a shoulder is needed to lean on, the number 6 will be the first to arrive, equipped with a kind, soft presence and heartfelt advice. It does not simply wait to speak – it truly listens and seeks to understand so it can direct its compassion and healing where it is needed most.

Protective : The unconditional love of the 6 extends to all beings and allows it to speak up for those that don’t have a voice. But this protection becomes especially fierce when it comes to family. Anything that threatens to upset the emotional or spiritual balance of its loved ones will awaken the ire of the 6.

Romantic : The 6 is more romantic than any other number. It works hard to create peaceful, mutual relationships and is fluent in all the love languages (and soon to be Japanese Kanji). The number 6 is only happy when its other half is happy, so it will direct all its time, support, and affection into making this so.

Weaknesses of the number 6

Passive : In an effort to please others and keep the peace, the number 6 may allow itself to get taken advantage of often. More assertive, controlling energies can easily overpower the 6 who would rather go along with an undesirable option than speak up and make waves.

Self-sacrificing : While its compassion is a virtue, the number 6 is so willing to sacrifice itself for other people and the sake of harmony that it neglects its own needs and well-being. There is only so much one can give and this number often overlooks the self-care that would make it feel balanced. As they say, you can’t pour from an empty cup. ← DAMN

Idealistic : The 6 expects everyone to treat others the way it does which, in its mind, would lead to a perfect world. But that’s not the way the real world works, and when this number realizes its ideals are unattainable it may face extreme upset and imbalance (and insanity).

So this has been a pretty interesting dive into the number 951 huh? I certainly learned a few new things today, and I sure hope you have too!

As I slowly walked into this new “Reality” of “WaniKani Forever” I didn’t expect to be greeted by such insanity. I soon after writing the level names post I wrote “What Not To Do” - This is what NOT to do … which is where I first did battle with the great beast & number 692… maybe we can go over this number some other time…

But from the battle of 692, the great crabagator once again threw all it’s turtles at me yet again in an attempt to take me out of the game… But it has failed yet again, but this time, it’s not without damage… if this was a true fight, the Crabagator certainly got it’s lickings but it’s not without having had been beaten the living hell out of as well. 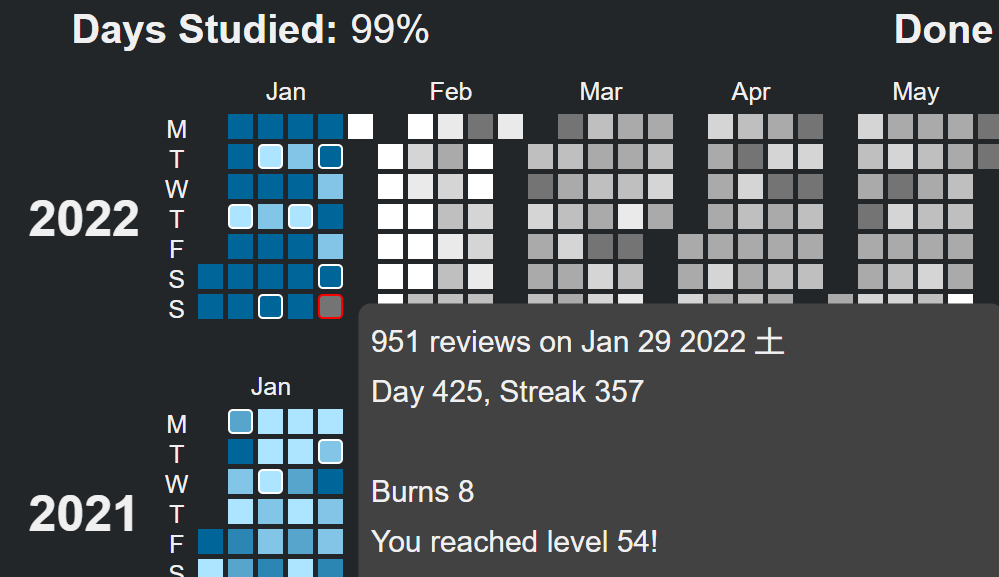 I’d almost consider this a draw, but I’m the one who cross the finish line after going through 951 reviews, so it is I who gets to mark another win in the battle for Japanese Kanji fluency.

So… new plan. I will continue doing my Kanji as it’s available and moving through this monstrosities labyrinth of kanji at the same speed I’ve been going… however I will no longer be doing the full rampaging I’ve been doing by also doing all the lessons. Up until now, I’ve hardly ever let my reviews of lessons get above zero (for more than a day or so) besides a handful of times over the last 420 days… (I’m sure we can do a bit about this number too :P)

This is war boys and girls… the happy go lucky time of levels 1-40 are now behind me and now I travel the desert of the Crabagator alone looking for water, food and time to rest between battles. It’s almost like a religious war I’m fighting against this thing… this beast!

951 is the number of levels on WK if every time someone makes a thread requesting more levels, WK adds 1 level.

This post is more of a journey than Homer’s Odyssey

This thread is more of a journey than what our parents had to go through in order to go to school back in the day.

That’s a lot of trolling just to avoid reviews

This is the rage inside my soul crying out for freedom against the monstrosity called the Crabagator!

it’s how many reviews I did that day.

But when one does that many, you lose a part of your mind, which you can again review again by rereading the article above!

Great explanation to what happens to the mind when you do too many reviews in one day.

It’s similar to a fever dream… looking back on this, it certainly holds a level of psychosis and chaos that one would be immersed in during a fever of 103… especially the punching gif and the cat attacking the dinosaur.

I’m sure that’s when one would wake up and throw up all over the place!

What is going on here.

Chaos… in all it’s glory!

This is true… most people won’t see how this was a bad idea until the bitter end, when they have lost their mind.