Chapters 1-3 Discussion starts here!
The main thread of this book club is here.

Where are you with this book?

editing guide How to contribute to this vocab sheet The more people contribute to the vocab sheet the more helpful it is for everyone, so please don't feel shy about adding to it! Please read these guidelines carefully before you get stuck in, so...

I know nothing about this manga, so I’m excited to see how it goes! The first chapter did indeed have many pages without words, making the reading go quickly.

This was a beautiful chapter. The wordless opening was really stunning visual storytelling.
I’m wondering if anyone knows more about conversational Japanese than I do–

幸田さん (the father figure) says before the shogi game:

I under stand this generally to mean I mean, It’s not even rainy season yet…
I give up, I mean, at a time like this, to only talk about the weather

But I’m not sure what the bolded bits are.
I thought maybe the first bolded bit could be a contraction for はいって/おらない>>>はいっとらない、but that would be weird to mix humble and casual speech, right?

The second bit is maybe a contraction for こない–>こん. Is that a thing?

But I’m not sure what the bolded bits are.

This is a way of speaking used by old men in manga/anime.

Ebook page numbers because I’m too lazy to convert

Can someone fill in the 平常心＿道 in that banner? I’m not good at reading script like that…

I absolutely love the visual chaos on this page and the few that follow.

What does the コマ in 豚コマ mean? I assume I’m missing something simple…

I had some trouble with these lines, particularly 一手一手まるで and 生々しく残ってる気がする. I think I understand them in context but not sure what the actual phrases are doing.

Still need to finish the chapter, will probably have more questions later.

Can someone fill in the 平常心＿道 in that banner? 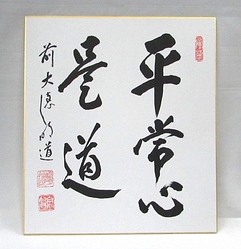 (Left: from the manga; right: Source)

I just noticed I didn’t respond on the こん part:

So, in all, I think he’s saying something like, “It’s hot, isn’t it? Even though it’s not yet the rainy season…” (waits and doesn’t get a response) “I give up. You didn’t come here just to talk about the weather.”

Keeping in mind that I’m not reading along yet, so I lack context:

It looks like 一手 refers to a move in shogi, so maybe 一手一手 refers to a succession of moves? Just a guess, so probably wrong, but going along with that thought:

が＋する can be used to state the subject does an action, but it can also be used for a feeling. (Example: 気がする…which I just noticed is in the very next sentence.)

Maybe something literal would be: “Had felt the sensation like each successive move was barehanded blow.”

Continuing with 気がする as a sensation, everything before 気 is modifying it to describe the feeling. It is a feeling of 「殴った肌のあたたかさまで生々しく残ってる」

Perhaps literally: “It remained raw, as far as the warmth of my stricken skin.”

Masterful sleuthing, @ChristopherFritz! Also, thanks for the help on contractions!

That makes sense. Sometimes, when I can’t find a definition, I do an image search in Japanese, and for 豚コマ I found finely chopped meat.

It remained raw, as far as the warmth of my stricken skin.”

This sounds great, except I wouldn’t say stricken skin, because

I’m pretty sure he’s comparing himself to the perpetrator of the murder in the news-- so the warmth of the skin is maybe the warmth leftover in your fist after beating someone?

Since I lacked context, I imagined he was perhaps beaten in a game of shogi, and was reflecting on how that felt. But if he won, then rather than the feeling of being defeated, it’d be the feeling of defeating someone else.

I would think so. There’s always little peculiarities in any language, but this one seems basic enough that it be used in either way. (Just guessing here.)

So, in all, I think he’s saying something like, “It’s hot, isn’t it? Even though it’s not yet the rainy season…” (waits and doesn’t get a response) “I give up. You didn’t come here just to talk about the weather.”

I think @Wildjinjer’s translation was closer: “It’s so hot… even though the rainy season hasn’t even started" “…” "I’m beat. To think that I only manage to talk about the weather, at a time like this / in a moment like this”

The 出てこない is referring to the 話, or the topic he’s talking about.

"I’m beat. To think that I only manage to talk about the weather, at a time like this / in a moment like this

That’s how I read it too

Prenominal verbs can be a tricky business, and in certain context yes I think this is true (though 殴られた肌 would be strictly “skin that was struck”). In this case it seems pretty clear to e that it refers to the hand that did the striking; how your hand stings from the impact of a blow (or in this case feels hot; あたたかさ).

殴った肌のあたたかさまで – he’s saying that this sensation of “striking” is so vivid (生々しい) that he can even feel the warmth as if from the aftereffect (残っている) of a punch.

So if I were to render the whole phrase somewhat literally:

Move after move, I felt a sensation like I was beating something with my bare hands
The sensation went even so far that I could vividly feel the lingering heat in my skin as I struck

Mostly how I read it, but I’m wondering if he’s talking about the warmth of the skin he’s hitting and not his hand stinging.

Also I think he’s talking about the entire sensation lingering rather than just the warmth specifically. Basically, I parsed it like this:
（その感触は）［殴った肌のあたたかさまで］生々しく残ってる気がする

I’d translate it slightly differently (used “his” as a pronoun because I think it’s obvious he’s talking about his opponent):

Move after move, it felt like I was hitting him barehanded. I could even vividly feel the warmth of his beaten skin as the sensation lingered.

I’m not sure I agree that he’s talking about hitting his opponent, though my reason comes MUCH later in the series when the sensation levels up and begins to feel like the skin is being ripped from his fingers as he lifts them fro the pieces

Though I also recognize that this knowledge could have influenced my reading of this sentence. I think in isolation I would have come up with an interpretation closer to yours.

lingering heat in my skin

Ooh, that sounds really good.
I do think the lingering is longer … Because the “beating” was hours ago.
殴った肌のあたたかさまで生々しく残ってる
This is a fun sentence to tackle, isn’t it?
Like @denzo , I used to think it was his opponent’s skin, but I’ve come around to thinking it’s the warmth in the skin of his hand. He is staring at hand at that point, right? Maybe thinking “I can still feel the warmth.” That might make me lose my appetite, too.

Now I’m leaving literal translation entirely, and going with my current understanding of what he’s talking about.

I can even still vividly feel the warmth in my knuckles.

To think that I only manage to talk about the weather, at a time like this / in a moment like this”

I know English is less tolerant of sentence fragments than Japanese, but this was such a clipped sentence fragment that I intentionally made my English translation a fragment. I think making it a complete sentences loses some of the beat-ness of the expression.[quote=“ChristopherFritz, post:6, topic:45895”]

He’s definitely talking about hitting his opponent. The thing that set off this reverie was a news story about a man who was beaten to death by his son, so it’s a direct parallel between him and his adoptive father/shougi opponent.

Ah dang, I missed that – it’s been a while since I read this and I just skipped through to get to the sentence in question. Definitely deferring to @denzo’s interpretation in that case.

I can even still vividly feel the warmth in my knuckles.

If there’s one thing I’m sure of, he’s talking about the entire sensation lingering. The warmth of whoever’s skin it is is neither the topic nor the subject of the sentence

That sensation is still fresh, down to the warmth in my knuckles?

(I’m using knuckles instead of skin, to hint at the hitting, because it’s so awkward to include it in English)

@denzo, @jacobalbano it’s been fun chatting with you in real time! Now I’ve got to go do my reviews!