Chapters 11-13 are one story arc (神さまの子供) so I’m keeping the discussion together, but splitting the story arc into 2 weeks of reading. That happens a couple of times over the book.

Nah, not just you. I thought we decided on 2 chapters/week a few weeks ago, but it looks like it’s loosely split by arcs now. I’ve already read chapter 11 and 12 last week and expected 13 and 14 this week because I forgot the start was postponed by a week. So I was very confused when I saw the thread, but not a big issue.

Hi, I noticed the vocab sheet is set to “view only” – you might want to change the edit access to “anyone who has the link” so others can contribute to the list c:

Sorry for the confusion! I wanted to keep story arcs in a single thread, and avoid weeks where we switched from one thread to another midweek, and this seemed like the best way to do it. No worries, though, you can just read one chapter next week.

This is a two (2) chapter week, so we will finish the 神さまの子供 story arc.

Rei solves a 詰将棋 problem in chapter 12.
These are checkmate problems. To solve them, you put the (opponent’s) King in check, and then keep it in check until checkmate. If you want to play along with Rei, you might find this paper shougi set helpful. If you just want to understand what he’s saying, you may find my guide to shougi pieces helpful. 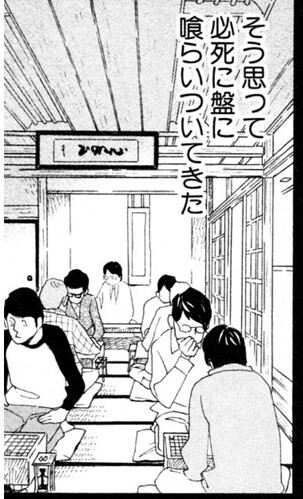 Is it like “while thinking like that, I came to desperately bite into (hold on) the board”?
Why is 喰らう used here instead of some verb that means clinging or grasping?
Sure the feeling of holding on is conveyed, but is this a common way to describe this kind of situation?

he is talking about how he began biting in the plate (bord I guess) desperately, following that line of thought it’s 食らいつく

biting in the plate

Taking advantage of the dual meaning of 盤 as plate and Shougi board. I love that kind of thing.

Finally catching up on my own book club😋

i feel the second has more of an acceptance of fate? like i wanted to end up going that way(hence the へ instead of に). and it’s more about ending up going that way. you can’t always go to the direction you want. like in Classical Mythology/Jungian psychology, the prophet has to go down then up and cannot go up at the beginning. so you want to end up going up but you can’t at first.

yukinet got it covered in their reply, but to point this out more distinctly: どこか means “somewhere”, not “where”, so the first one would be “I wanted to go somewhere”.

どこか means “somewhere”, not “where”,

i didn’t even notice, thanks for pointing it out.

Thanks, I should know this, but I always forget it.

Another grammar mystery I’d like help with, if possible: 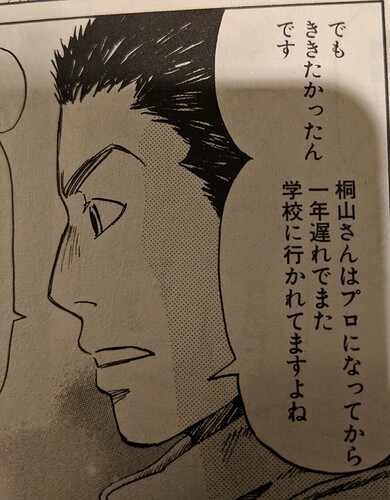 I don’t even know what passive voice of 行く would even mean, other than the usage than indicates something is being done that annoys the speaker. Is it maybe that use? But 桐山 is the は topic of the sentence, so that confuses me…

It occurred to me that maybe translating it thusly captures what you’ve said:
Rather than “there’s somewhere I wanted to go,”
“I wanted to go somewhere.”

my guess is that it’s the potential and not the passive, quoting from imabi

The potential and passive verbs go hand in hand. For the majority of Japanese’s history, these two things were expressed by the same endings, with context being the deciding factor as to how interpret them. This is certainly still the case for ～られる, which remains the standard ending for both the passive and potential for 一段 verbs and 来る.

However, ever since the invent of the shorter potential forms of 五段 verbs, the ending ～れる is rarely used to mean “to be able to.” Using 行ける, for instance, instead of 行かれる has become standard within the last century. There are still speakers who use the traditional ～れる for these verbs, but you are more likely to see this in literature.

Distinguishing between the passive and potential meanings of ～られる and ～れる may seem confusing, but context and particle usage will always help in determining which is meant. Ex. 47 is a great example of a bridging context between the two meanings as there is logical overlap between the two, whereas only the potential meaning is possible in the very similar Ex. 48. This is because the receiver of the medical exam is a person, not the medical institution. Careful analysis of who is doing what, or is capable of, will be necessary for you to read these ambiguous sentences correctly.

Maybe? Although Takahashi kun didn’t strike me as the type to use old fashioned grammar. 桐山、maybe.

but i mean it makes sense, you were able to go to school again after getting held back for a year. maybe it’s the type of grammar that floats around like the flu and never dies?