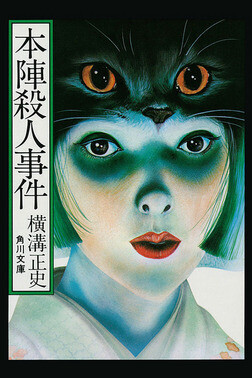 This book is part of the 金田一耕助 reading club. We will read the 2 short stories published with 本陣殺人事件. The main story was read by the Advanced Book Club here. It is part of a series, but the individual parts can be read as a stand-alone.

You can buy it here:
Amazon

There will be no weekly threads, all discussion will be had in this thread.

Reading Schedule
We will start reading on April 11 2022.

Finally, it’s time to start 車井戸はなぜ軋る! I already started reading this, and I have to say that it is very difficult to keep all of the characters straight. Even more so than 獄門島. But even though this is a lesser-known short story, that doesn’t mean that there’s no convenient list of characters to be found online.

Also, I already have a question. Does anyone get the 二重瞳孔 thing? I know that 二重まぶた is a big topic of conversation in Japan, but two pupils?! Maybe this is just common knowledge that I’m missing out on, but I didn’t get what this was about, even though I have a feeling that it’s going to turn out to be an important clue later on.

Last but not least, I learned that お葛の葉 is not a leaf… 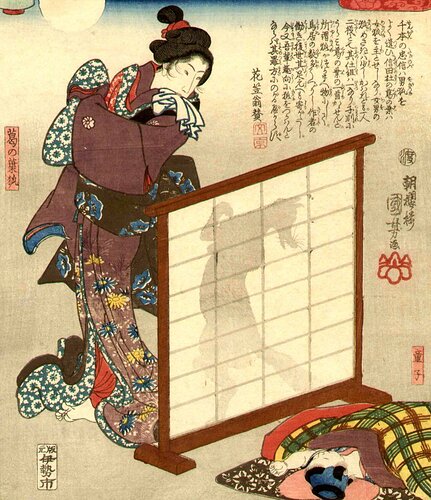 There seems to be a medical condition where people have two pupils in their eyes - the wiki page talks about two pupils (the black part) in one iris (? Not sure this is the correct English word. The part that’s brown/blue etc), but on Google images you can find pictures of both that as well as two complete pupils with both the black and colored part in one eye. Probably a lot of photoshop involved in some of them as well.

What I found interesting is that according to that wiki page apparently in olden times China (and later Japan as well), they ascribed this and other bodily differences to old aristocracy/famous people.

Interesting. I saw those pictures on Google but I didn’t realize that was a real/common thing. Eyes seem to be pretty important in this story though, so I’m sure it has some meaning for the mystery…

it is very difficult to keep all of the characters straight

Agree. I had to look up the names in the wiki several times.

Hey, good to see we have a new member! Looking forward to reading your thoughts once I finish the story.

). I’m pretty confident I’ll take all week to read this, but it feels doable.

I wonder if we’ll learn who our narrator is eventually? And why 金田一 gave them all that. It doesn’t feel like the narrator we met in 本陣殺人事件 to me.

Oooh! That makes a lot of sense, actually.

I’m almost sure that that has to be it, now that I’ve seen it. It seems so obvious now.

Okay, I’m finished reading the story now. Just like 獄門島, a really depressing story about the postwar breakdown of a once prosperous family. Almost a companion piece to 獄門島 in a way, but also with themes in common with 本陣, as you noted.

(Spoilers for 獄門島 are blurred)

For a short story, that was quite a heavy week of reading! Maybe 黒猫亭事件 will be a bit lighter? We can hope…

Might be good to note specifically 獄門島-related spoilers, in case someone’s read this and not that.

Interesting to hear about the experience reading it after 獄門島 though! I’m glad it felt like it clicked into place chronology wise!

maybe 黒猫亭事件 will be a bit lighter? We can hope…

I think I remember that one being at least a bit less dense detail-wise. Probably not lighter tonally though…

After the Easter weekend left me with almost no time to read, I sat down to finish 車井戸はなぜ軋る today. What a ride! I don’t think I can quite formulate my thoughts just yet, I’ll have to come back to that after allowing it to digest a bit.

Hope you’re ready for 黒猫亭事件 right away this week!

Planning to get right into it tonight! This next one is so long it’s almost not even a short story and there’s a cat in the title. I’m looking forward to it!

I think I mentioned this before, but it really feel like I’ve gotten used to some of the ways 横溝 likes to use twists. Some of the turns this story (車井戸) took felt almost familiar. I really liked the way it was told in letters, too. I think so far 横溝 employed a different narrative style with every story? I like that! Makes me look forward to what else he might have explored in other stories!

Also, I ended up reading up to and including part 三 of 黒猫亭.
Finally my questions about the narrator in 獄門島 and how the narrator and 金田一 are connected got answered!

The problem with reading early in the week is that now I have to wait until next week - and we end on a bit of a cliffhanger this week.

I like the return of the diagrams here. I really, really love those, haha. I think it’s really interesting how we always get a bit of a hint at what’s awaiting us before getting into the actual story (like here with the はしがき again), while still keeping the details back to be discovered reading. And this time we learned beforehand what was not going to happen/have happened with this case - only to have everything pointing towards exactly that scenario! It’s kind of vexing, but it also makes me curious to find out more. I haven’t read a lot of detective stories (aside from Sherlock Holmes), so I don’t know if this is a common device to hook readers. It’s working on me, in any case.

I’m really enjoying 黒猫亭事件 so far. I really have no idea where this is going, although I have a feeling that things will not turn out the way the clues seem to suggest…

I especially liked the part at the beginning where the murder scene was discovered. Very creepy… as grotesque as 横溝 has gotten so far. Where 車井戸はなぜ軋る only hinted at a more twisted outcome that ultimately didn’t manifest, this story boasts some ドス黒さ that would make 江戸川乱歩 proud.

刑事s in Japan must be hard-working. They had to visit every single person who was related to the owners, in person. 風間 doesn’t seem to be very suspicious to me, because of his transparency. I’m more curious about how two black cats are contributing to the case. It looks like the 刑事s haven’t seriously discussed about the cat. But, you know, “black cat” is in the title.

BTW, does anyone know the furigana for 日兆 and お繁（おはん？）？

I’m more curious about how two black cats are contributing to the case.

I’m really curious about that too! At first I was considering that maybe it was just about the bar’s name, but after they found the dead cat, I’m pretty sure it’s relevant somehow!

I’ve been calling him にっちょう but sadly haven’t been able to find anything either. This site seems to suggest that recently priests use kunyomi before, and onyomi after 家出する. What have you been calling him?

お繁 I’ve been reading as おしげ. I wish I knew how to look for this kinda of information online!