What else along with WaniKani?

WaniKani’s vocab is limited to what is useful for learning kanji, and is organised according to the difficulty of the kanji. a lot of common vocab doesn’t appear in in WK because it doesn’t use kanji, or only appears late because the kanji is complicated.

so learning the vocab in Genki is probably a good idea

Yes it can become too much if you are not careful. So take care not to go too fast on WaniKani or to add too many words to your secondary SRS tool. Don’t feel obligated to go the maximum speed.

At a beginner level you should only add the most common words to your secondary SRS, to create a core vocabulary of the most useful words. Cure Dolly has videos on immersion as well as grammar that will guide you on how to do this.

Right, so as Genki introduces Kanji later on, is it a good idea to look up the Kanji of the essential vocab words I choose to add in my SRS on Jisho.org ? this way I can also see if that will be later covered in Wanikani.

I’m not that much further along but KaniWani was huge for me. Being able to recall vocabulary starting from English > Japanese is very complimentary to WK. It was frustratingly difficult at first (new way of thinking?!?! especially since I started at level 3 and had a ton of catch up to do. It was frustrating how much I couldn’t immediately recall I had a good angry laugh about it) but right now I feel it really helps with the reinforcement learning/retaining current material.

I’m also using Bunpro but I’ve been processing that content really slowly. I find that it’s a good suppliment when WK review periods are being a bit “slow.” As I learn more about grammar it really does reinforce the intial tofugu advice that you’ll have an easier time with a stronger foundation of vocabulary.

Well personally I don’t recommend Genki. And I would say there’s no need to learn the English translation of a kanji. It’s really only an approximation. Just learn the Japanese word that contains the kanji and you’re fine. WaniKani will give you more than enough imperfect English translations.

Try out Cure Dolly first. If it suits you, just stick with her and you will rarely need anything else grammar-wise. I’m speaking as someone who wasted 3 months doing Genki 1 before giving up, searching for something new, and finally discovering Cure Dolly.

Also, you will hear people recommending KaniWani or KameSame to do alongside WaniKani. As someone who’s done KameSame for 54 WK levels I can say that it definitely helps to remember the words and get used to Japanese inputs but keep in mind that it is basically forcing words into your active vocabulary. And it adds a ton of work if you stick with it for as long as I did. At some point you will get frustrated when it asks you to input words like “nuclear submarine” after 4 months of not seeing it anywhere else in your study or immersion.

If you want exercises to go along with Cure Dolly’s videos, you can try Bunpro, which gives SRS items for grammar. It allows you to go at your own pace and add items from the video lessons you just watched. I like to use the grammar search feature for this. Just don’t listen to any of the grammar explanations, they’re so bad.

Or you can join the Japanese sentence a day challenge and make sentences with the grammar you just learned. Ask people to correct you if you get it wrong.

what are “graded readers”?

As for having another SRS for learning Kanji I come across( in Genki, anime or other resources), does that not become too much? learning the On, Kun and vocab readings of soo many words alongside Wanikani.

If you mean the work load on the brain, I personally find that as I pile on more work and ramp up the pace, it actually gets easier. If you mean the daily time investment, yes multiple SRS platforms in addition to grammar and immersion materials can be a lot if you’re running every one of those engines at max speed. (However learning WK items somewhere else before you’ve unlocked them doesn’t actually add work. Each item that you already know before unlocking should require less than 90 seconds of time spent on its lessons and reviews to burn.)

Think about your end-goal for Japanese. Whether it’s just comprehending media, basic fluency, or truly advanced proficiency, there’s a certain body of knowledge that exists which you must learn in order to achieve that goal. There’s no shortcut to it. More knowledge learned each day = that end-goal being reached sooner. Not every hour of study = an hour of learning though. If you get bored or exhausted after 2 hours for example then further studying is useless. It’s all about determining how quickly you want to reach your goals, and how much time you’re able and willing to spend each day.

But at the same time, you want to leave time for immersion and not just be on SRS all day. So it’s a delicate balance.

Hope I don’t get judged for this but what exactly is immersion?

immersion is when you surround yourself with the stuff you’re learning. so that you’re not just studying japanese, but also watching stuff, listening to stuff, reading stuff, all in japanese.

that leads to learning through exposure: you just pick up things as you go along. and it also helps you reinforce the things you learned while actively studying

Oh no judgement, I should have explained a bit more. Consume real Japanese content. Preferably something that interests you, because this is going to be very slow going at first. For example if you like anime, pick an anime and find a way to watch it with Japanese subtitles (I won’t go into how to get Japanese subtitles because often this isn’t entirely legal in English-speaking countries). Or if you like video games, find a Japanese video game on steam. If you’re a reader, get a Japanese manga or book. Whatever appeals to you.

Next find a Japanese-English dictionary app that you like, along with an SRS program where you can add custom items. If you’re not sure where to start, there’s a free app developed by a WaniKani member called HouHou that is both a dictionary and an SRS platform. You can find it on google.

Next, go through your native material and look up words that you’re not sure of. It will help to have some grammar knowledge for this part to help pick out the individual words, but you may be able to do without it. If it seems like a very common word, add it to your SRS program. If it’s very thematically important in your native material, you can add it as well so that you will remember it when you come across it next time. Try to focus on words more than on learning kanji, since you’re already on WaniKani. Remember to clear your SRS reviews once a day, but try to spend most of your study time on immersion. If you keep this up you will start to build a core vocabulary of common words, but more importantly you will start to understand how real text is used and what the various expressions mean.

Cure Dolly has a series on immersion if you want to know more. Remember that this will be slow and painful at the beginning but it is the only way to learn real Japanese. Platforms like WaniKani only take you so far.

Thanks a ton! This really helped me understand wayy better! Can’t wait to get started

I’m really sorry for the late reply but I’ve been really really busy.

Graded readers are basically books specially designed to learn a foreign language. They have different levels of vocabulary, say grade 1 would have extremely easy vocabulary, grade 2 slightly difficult than 1, grade 3 a bit more difficult than 2 and so on. They also use basic grammar and increase the difficulty by levels.

@evandcs to elaborate on what @Catherine670 said, here are some samples from Tadoku graded readers:
Level 0: 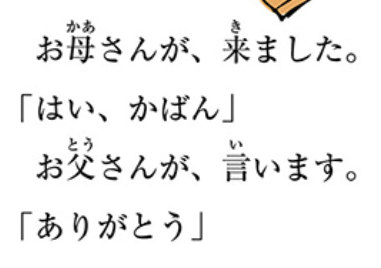 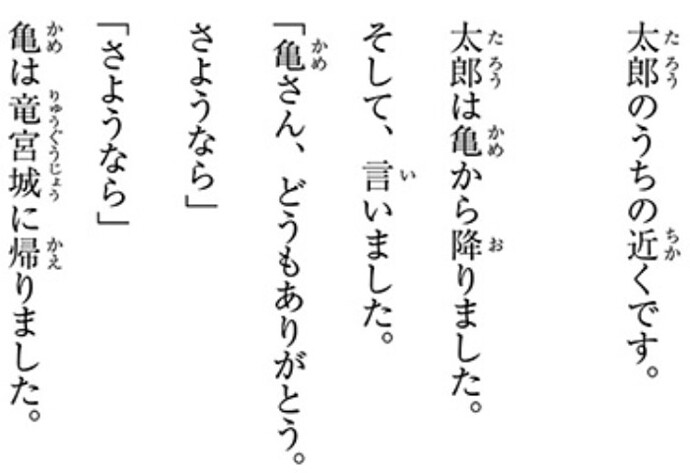 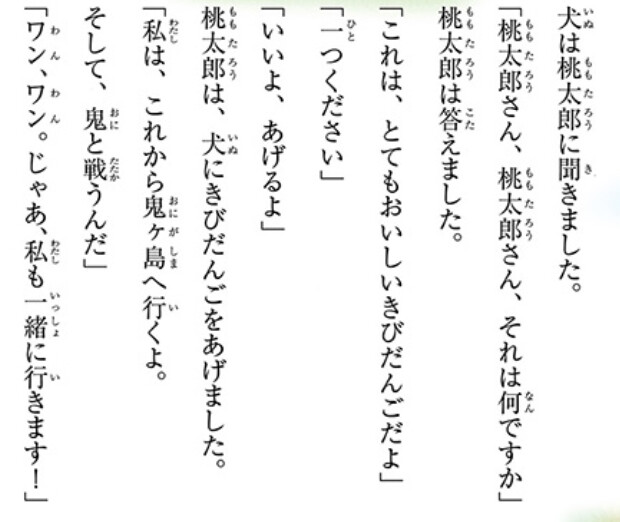 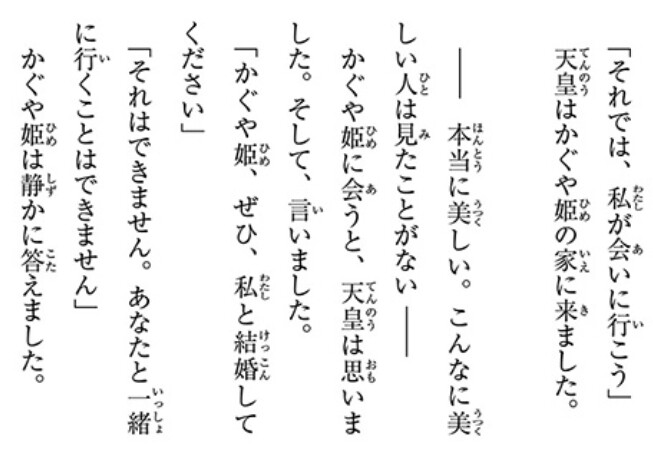 I don’t have samples for level 4, but hope this makes it a bit clearer.

After learning basic grammar, when can one start Lvl 0 graded readers? Is it at level 10 of WaniKani?

Purely because WaniKani doesn’t teach vocabulary in the order of importance I’d say you can start immediately. The Tadoku graded readers (the ones I sent screenshots from) are pricey, but if you don’t have any previous experience learning Japanese I can imagine they’re well worth it.

As for grammar you’d need to know you can check out their site: にほんご よむよむ文庫 Japanese Graded Readers – レベルについて – アスク出版 日本語教材
Level 0 readers for example expect you to know the following grammar:
present form, past form, interrogative, ～たい, etc.
※ です and ます endings in the main.

For more resources or if you have more questions regarding graded readers in general you should check out this thread Graded Readers and Parallel Texts "Book Club"
I had already studied Japanese before I started WaniKani, so my advice might not be as helpful as that of some of the folks in the Graded Readers thread who started their Japanese journey with WaniKani.

Righto! Thanks for the help