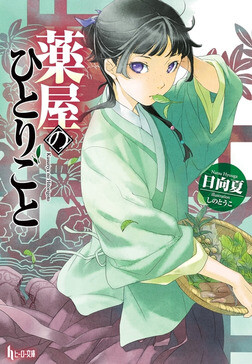 I very much would have liked to keep reading after finishing volume 1. Alas, I currently do not have wifi, and while I own the next volumes, I hadn’t thought to download them in advance.

There’s a very specific frog in volume 3 that comes to mind.
Maybe you can hunt down my comments on the series in the 多読 thread, by the way? I’m looking to what you think of the rest of the series

There’s a very specific frog in volume 3 that comes to mind.

Navigating that thread is a pain if you want to find something in the past ^^.

I’m definitely gonna continue reading but I need to take breaks in between volumes since I’m 100% punching above my weight. The biggest problem is that my brain is so focused on the language that it has no capacity left to get the sometimes complex circumstances for example in vol 4 when they explain everything to Jinshi and all of the family connections I was 100% confused and a friend of mine had to explain the whole chapter to me.

Navigating that thread is a pain if you want to find something in the past ^^.

The search tool from the forum with the “search in this topic” option works pretty well for me.
But anyway, here are my thoughts on volume 2 for instance.

I finished reading this! I enjoyed it pretty well!

In the right frame of mind, the wry style and tendency for lots of things to be left implied or not quite explicitly said can be a lot of fun, but I did definitely find it easy to fall into the trap of reading too quickly without really parsing things…
In particularly, in the middle (around the big multichapter banquet) I noticed that I was rushing to finish way too much and not really processing anything. A similar thing happened earlier in the year with Kiki’s, which similarly is structured more like a collection of incidents than a single narrative thread, and I didn’t want that to happen again so I made sure to slow down and ended up taking a pretty big break.
When I picked it up again I was less focused on finishing things and was able to take it at much more the right pace, although there were still definitely details I glossed over…

I like 猫猫 a lot - but then maybe part of the problem is I like and am invested in her much more than… any other character, which made it easy for the rest to end up a half-digested slurry of titles and Mandarin character readings.

I think I followed ok individual mysteries, and stuff like when 猫猫 went back home and I did enjoy developments like the twist about her おやじ’s past job, her warming up to the palace and the job but not saying it, the implication, （I think, right…?）, that 壬氏 is secretly/unknowingly(?) a prince, etc. although I think I assumed from the gap and the section where I wasn’t paying attention very well that keeping track of exactly how everything tied together was probably a lost cause and tried less than I should have.

I remember at the very beginning, not having actually read the synopsis, realizing the beginning was talking about her immediately being kidnapped and being like “wait, uh… okay??” and I suppose my arc with that setting was similar to 猫猫’s in the end.

I’d be curious if taking the second volume with the built up context from the first if I’d enjoy it more and be more careful with it (or if the problem would compound…).
I feel a little regretful for not posting more at all in the book club threads, but I have a bad habit of not asking questions and only answering them, and the answering seemed well covered!

Well, it’s 猫猫’s wild guess. We have no hard proof in favor or against it at that point.

The fact they are going to the 妓楼 in the last chapter kinda hints strongly that he is not an eunuch, though. As 猫猫 mentioned early in the book, there’s another category of men who are allowed in the 後宮

Done! And somehow on schedule, too! That was certainly the hardest thing I’ve ever read–a lot of it felt more like deciphering than reading, which definitely hurt my motivation. I would have liked to have been a bit more participatory in discussion, but I was usually so drained from finishing the week’s reading that I was ready to move on rather than spend more time asking and deciphering.

I pretty much agree with just about everything @rodan said. I liked 猫猫’s character a lot, and she outshone the other characters and events to the extent that they seemed kind of bland in comparison. There were a few chapters that I really enjoyed (猫猫’s home visit in particular comes to mind), but they were largely interspersed with chapters that were mostly forgettable. I probably would have gotten more out of the circuitous writing style if I had been a bit more patient and slowed down a bit. That, plus the episodic nature of the story made it difficult for me to remember small details that probably gave the mysteries in the later parts of the book some more depth.

I would consider reading more of the series, but probably not until I’ve further improved my vocabulary in order to improve the effort to payoff ratio a bit.

I’ve finished as well! \o/ I’ve been marking grammar questions in my Kindle copy as I go along, but by the end of the book I didn’t feel they were hurting my comprehension, so I’ve taken the lazy way out.

Good book, as expected (reading and enjoying the manga first will definitely do that to you). Will definitely be moving on to the second book, though I need to take some time and finish making flashcards of all the words I pulled from the first, which has ended up being…a lot. Around 1647. Not all of those words are totally new, of course; a good chunk are. A chunk are words I can accurately guess their reading/meaning, but not both. Others are words I’ve learned in the past at some point but don’t seem to have stuck. Given that the (print version of the) book has 318 pages, that shakes out to about 5 words per page, which feels low given some of the lookup sessions I had. But I think it’s definitely one of those cases of looking up tons of things in the beginning, which slowly tapered off as I went along.

The goal is to absorb a bit more of that vocab before starting volume 2, while not taking so long as to negate my familiarity with the author’s style, so that when I do start volume 2 everything runs as smooth as possible.

My last top place for how many words I pulled from a book was 夜市, which ended up only being around 1000 or so; I don’t think 薬屋’s historical setting did it any favors in the lookup department, haha.

This book let me realize again how much I like historical settings. MaoMao is quite interesting with her quirky tastes and attempts at keeping her thoughts to herself rather than diving headlong into a situation (as her jiichan? always advised her).
The fight within the harem though…

I think I’m gonna continue with the rest of the series and might read similar books surrounding the 後宮
Thanks y’all for the commentary and intro to this kind of book. Until next time!

I finally finished the book! There were good chapters here and there, but it was a slog much of the time. Like others, at times I just glossed over stuff because I didn’t feel like stopping to think harder.

I really liked 猫猫 as a character, but I didn’t really care about any of the other characters.

I give the book a solid 3/5, but I have no plans to read any more from the series.