海辺のカフカ - Kafka on the Shore 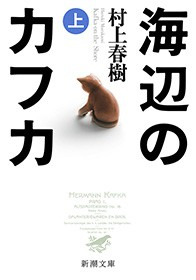 I’m only a few pages in, but I had to reply here:

Week 7: 海辺のカフカ - Kafka on the Shore

Wow, you called this so perfectly! I’m really impressed

I had that feeling too… Strange things are definitely happening. Just when you think things are can’t get any stranger, we get…

The Prophecy already came up earlier in the book if I remember correctly, but I thought that was something the カラスと呼ばれる少年 had said? I think I commented on something similar in Week 7… そういえば it‘s been a while since we heard from him. Is he somehow related to Kafka‘s father? Is the カラスと呼ばれる少年 the unconscious that his father instilled in him?

It‘s pretty likely that Nakata is aiming for the library/Kafka (?). He must be closely intertwined with Kafka somehow, supported by the blood on Kafka‘s shirt / no blood on Nakata‘s clothes thing.

I… am not so sure about that

Looking forward to your comments on 1Q84

It‘s pretty likely that Nakata is aiming for the library/Kafka (?).

I think you said that before, and it’s getting ever more likely.

He must be closely intertwined with Kafka somehow, supported by the blood on Kafka‘s shirt / no blood on Nakata‘s clothes thing.

Yes, we got a reminder of that this week. And also the shadow thing. We haven’t heard about Kafka’s shadow yet, but maybe the two belong together according to Oshima’s soulmate-theory?

Chapter 22: Also, is it just me or does it feel like Nakata slowly regained some of his lost memories? He mentioned a lot of place names and incidents, and I thought that he would not have known about them before. E.g. at the start of his journey he said that he had never been out of Nakano, and now he remembers where he lived before and where he went as a child.

I… am not so sure about that

Looking forward to your comments on 1Q84

I guess I still have a long way to go in my Murakami education.

Anyone else amused by the fact Johnnie Walker was Kouichi?

I’m kind of dreading and interested how the rest of the prophecy is going to happen. Nakata meeting Kafka’s Mom and Sister and then Kafka somehow waking up in the aftermath?

And instead of blood something else is left behind?

And it was certainly a time; you know, we’ve talked about how weird it was that Kafka kept thinking about his sister and his mom whenever sex-type stuff came up, and like… I guess it makes sense now, huh. Very much channeling the energy of the “I guess” guy from that meme

Like yeah, if your dad was Oedipus-cursing you on a daily basis, the thought might cross your mind, huh. I do wonder if Kafka’s long-lost sister is going to turn out to be Oshima; I don’t remember all of the details from his childhood and the stuff with his mom, but I don’t remember there being anyone else in their household so? It seems like a direction this would go

I’ve also been wondering about カラスと呼ばれる少年, I think he said like one thing in the last Kafka chapter but other than that he’s been very absent, not sure what to make of all that. I also agree that Nakata is gaining more awareness, he definitely knows stuff that he didn’t before. I did like how anytime the stuff Nakata was talking about got really off the rails, Hoshino was just like “…I’m not good at long conversations so anyway”