I was looking for a topic on the subject, but couldn’t find one, so here goes.

I just saw the notification for the ‘Lower levels first’ setting, got really excited, and went to switch it on immediately. Then I gave it a second thought and realized that’s the opposite of what I need. Because I do all my reviews on time, I often get 120-180 reviews in a single hour. Often enough 60 or so of those are from the last level I’m trying to wrap up to proceed to the next level (or next half of a level), and so I’m racing to finish those reviews in order to be able to proceed to the next level so that it doesn’t lag with an hour. So I was really hoping for ‘Higher levels first’ functionality, and is why I was so excited at first.

Don’t get me wrong, I love to see the site expand in functionality. The Extra Study mode is something I use a lot, and I’m quite happy with it.

I’m a bit stumped with this feature, tho. Should I enable it? Can someone point me to the use case for it?

It’s aimed at people who have taken a break and forgot vacation mode.

By allowing them to do lowest level items first they can get through the large review pile more easily and it can make it less overwhelming.

Can someone point me to the use case for it?

I believe the use case is this:

Ah I see, that makes sense.

I had accumulated 500 and something before deciding to turn on vacation mode and taking a break for a while. One chill weekend I took a deep breath and dived in once again.

btw the userscript “reorder omega” I believe can reorder your reviews to the current level stuff if that’s something you said you need. 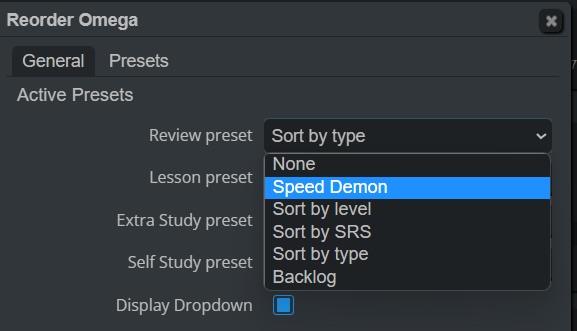 “Speed demon” prioritizes kanji / radicals of your current level as far as I’m aware, so you could technically level up and skip all your backlog of reviews. I wouldn’t advise doing that though!

Thank you. I was partially aware of the script, but I might just go and install it.

It’s not about skipping reviews, but more so doing the next level on time. If I unlock a level at say 9pm I can do the first reviews at 1am and go to sleep. But if I can’t manage the reviews on time, I’ll do the level at 10pm an have to wait for 2am in order to not break my schedule. I’ve even had to stay up until 3am which is not good when you have work in the morning.

I’ll give the user script a shot, thanks again.

I’ve even had to stay up until 3am

I mean… you never have to.

(Coming from me, someone who definitely cared about trying to level up at a planned time.)

(Though not enough to not go to bed.)

You can make a schedule that gives you time to sleep and seven days for two levels, but you have to be OK with sacrificing the four hours intended to allow this schedule to exist…

Yeah, I have a pretty good schedule. Mondays and Thursdays are for new items, and I complete a wk level in a week. I’m pretty happy with the pacing. But sometimes I’m out with friends in the evening and need to push back a review, other times I’ve simply forgotten to do one on time and remembered an hour or two later. Then you need to catch up.

I mean… you never have to.

I must! It is the law. insert meme here

Mondays and Thursdays are for new items

Do you have a reason you don’t want to spread these out a bit? Makes for a more even workload and you can still level up in a week.

I adjust them a little bit to fill in empty(er) time slots, but other than that I like a consistent schedule, so I don’t have to look up the reviews forecast when I want to make plans.

I used to do the reviews whenever for maybe the first 20-25 levels. Then I fell into a schedule for the next 10 levels or so, enough to get into the habit of it. Once, I forgot to do my reviews and everything got shifted a day forward. It turned out to be great since now Monday/Tuesday night are filled in, while Friday night and the weekend evenings are freed up, so I stick to it still. Downside to the shift being that I’m so used to the old schedule that I still get them confused. So I don’t want to make anymore sweeping changes.

I mean, that doesn’t change when doing lessons every day. You can still have consistent review sessions at set times and not worry about the forecast while leveling up on time.

But if you have found a system that works for you it’s probably best to stick to that.