Without the context this is even harder to recognize

Thinking back on it, I actually think I didn’t realize what it meant until I saw it in another series (Mitsuboshi Colors? Yotsuba?) and then I had went back and checked this story because I remembered it from there.

I guess it’s a counting sheep to sleep kinda thing?

The main character of the story counts a lot of sheep as she tries to get to sleep each night. 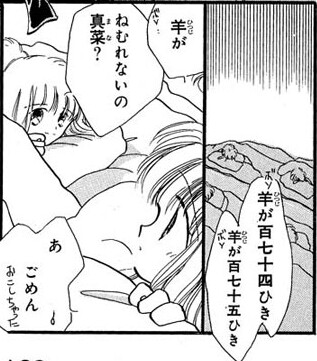 Another week, another chapter of Takagi-san! Seems like there might be some 教科書 sharing going on in this chapter. Should be loads of opportunities for Nishikata to get teased! Looking forward to it!

Are you planning on reading with us this week?

decided to read ahead because I haven’t been able to click ‘already read it’ hahaha…the last chapter is super cute!!!

I’m pleased to be joining this book club ! I’m a beginner learner but I’m a fan of Karakai Jouzu no Tagagi-san Series and I’ve already watch the anime so even though I’m not used to read japanese, I have a fairly good understanding of the dynamics between the different characters.

I will try to read along and catch up the 6 previous Volume in the mean time !

Welcome to the club! I am very happy to see more people joining up!

Feel free to ask any questions you may have in the respective threads. Most (if not all) of us have the threads set to watching, and we will be happy to help clear up anything that is ambiguous! Have fun, and I look forward to when you catch up!

Thank you, I will be in your care then !

Happy weekend everyone! I hope everyone is ready for the final chapter of this volume! There’s no おまけ this time, but I look forward to seeing what kind of 約束 is being made～

Are you planning on reading with us this week?

Even Takagi was surprised by them

Oh, is this the soda scene?
Just saw the clip a few days ago.

Yep, basically asking her out

As of yet, the sequel to this chapter is an Anime original, I don’t know if it will ever be featured in the manga

I sure hope it will, the 夏祭り was really the Highlight of season 2

Has anyone seen it ?

Unfortunately, since Takagi moved to a different streaming service for season 2, I never saw it. Actually, I only saw season 1 when it first came out, so it’s been so many years, I don’t remember it clearly. So at some point, I stopped being sure whether we were still in the events of the first season or not

There has been unfamiliar stuff happening for a while now, but I was never sure because (anime season 1 spoilers) I clearly remember Nishikata thanking Takagi about something and her being super happy in her room at the end of the season, and I feel like we haven’t seen that in the manga yet.

So I was never sure if the stuff we were reading was actually past season 1, or if I was just not remembering.

Where I live Season 2 is on Netflix so it’s pretty easy to acess.

“I clearly remember Nishikata thanking Takagi about something and her being super happy in her room at the end of the season, and I feel like we haven’t seen that in the manga yet.”

I checked and the 3 stories featured in the last episode of season 1 are all based on the manga. However the scene you remembered is an add-on. As it would seem, they are rearranging the chapters when building up a season.
Modifying/adding extra events in order to build a narrative thread and reach a climax at the end of each season. I must say it’s pretty well done, I don’t know how much the author contributes on this, if at all.

I’m trying to catch up to this thread and I while doing so, I watch the related episode to each chapter I’m reading . For now the three first chapters are pretty much copy/pasted in the anime Version.

That’s Nishikata after puberty hits but you can definetely tell he’s fit from all the push-ups!

but you can definetely tell he’s fit from all the push-ups!

However the scene you remembered is an add-on.

Ah, gotcha. No wonder we never ran into it in the manga.

[image] Home Thread Previous Volume [image] Currently Reading: Chapter 9 - 水切り + おまけ Summary Middle school students Nishikata and Takagi sit next to each other in class. Takagi, who is in love with Nishikata, enjoys teasing him with embarrassing pranks and jokes. In response, Nishikata creates plans to get his revenge, but they always fail when she identifies his weaknesses and capitalizes on them. Schedule Week Start Date Chapter Page Numbers Page Count Week 1 August 20th Chap…