I am sure most of you must have found amazing ways of memorizing some of the kanjis (potentially simpler or more efficient than the ones from WK) and I would be really interested in knowing if there was any ways of sharing those or seeing them (through maybe an API, where we could see suggestions from other members and a vote up or down for the mnemonics that we find particularly helpful). Not sure if something similar already exist?

Thanks a lot for your help and take care!

I don’t think there is an officially supported way. Maybe people could use the api to export what they’ve added and share that if they were willing to put in the effort. There are some threads on the forums here and there where people share mnemonics.

Yeah, I’ve noticed there is the odd mnemonic thread floating around. There’s even one person creating a comprehensive list of their mnemonics.

I’ve mostly been inserting my random mnemonics into different thread conversations if I think they’re relevant. I would like one specific thread when I can just put “Here’s my latest ridiculous mnemonic I came up with…what is wrong with my brain??”

I’ve found it helpful to connect mnemonics to my personal life experiences. For instance, I screamed internally once I found out that 富む is pronounced 「とむ」 and means “to be rich.” When I was in college and broke as all hell, my first girlfriend dumped me for a rich guy. Guess what his name was!

Does anyone have a good mnemonic for 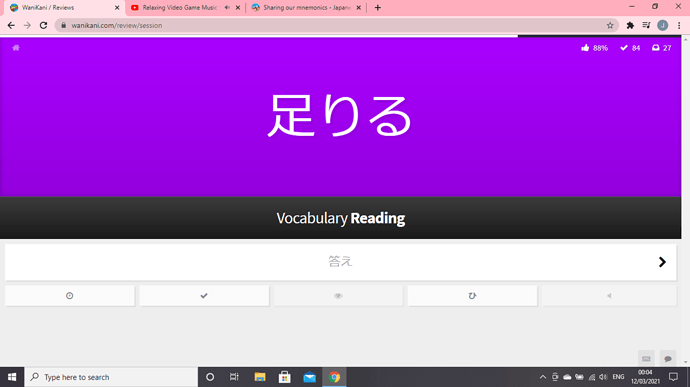 I’m really struggling to remember both the reading and the meaning with this one. Everytime it crops up, I recognise the foot kanji and I know it’s a verb because of る, but beyond that my brain can’t think of anything besides “do foot!”

I tried to start a mnemonic charity a while ago that was kind of the same thing, submit a kanji or vocab you’re having trouble remembering and users can share their personal mnemonic for it. The thread kinda died really fast unfortunately, you’re welcome to try and bring it back to life if you think it’d be helpful for you. Otherwise you can reply here with some ones you’re having trouble with and I’m sure you’d get dozens of new mnemonics for it lol

For that one I thought of someone with a foot collection, he can’t get enough feet. For the reading I had heard “tarinai” (not enough) in anime a lot so I didn’t really need a way to remember it, but if that doesn’t work for you… Sorry, kind of drawing a blank, best I’ve got is that 足 if you squint at it hard enough is almost like タ what with the box up top, the line sticking out in the middle, kinda goes off to the right… that sort of thing has helped me before even if it doesn’t really look like it. Sorry I can’t be of more help, that is a tough one XD

Everytime it crops up, I recognise the foot kanji and I know it’s a verb because of る, but beyond that my brain can’t think of anything besides “do foot!”

It must be a foot roo. A foot roo has only a single foot, but it’s a really big foot, so it’s enough.

It hops across the tar wetlands of Australia, so every time it hops, black tar flies all around. Because of this, it’s also called a tarry roo.

You taunt the foot roo. “You can’t kick me, because you only have one foot.”
The foot roo hops up to you, and says “For a 'roo, one foot is enough to kick you in the face.”
Then it leans back on its tail and kicks you in the face, leaving a tarry foot print.

Your friends ask you what’s wrong with your face.
You say, “Well, there was this tarry roo …”
Your friends stop you; they’ve heard enough. Everybody in Australia has had similar experiences, so saying “tarry roo” is sufficient.

For mnemonics, the ones that have stuck with me the best are either ones I can see in Japanese vocabulary I do know (e.g. 広 being part of 広島) or when I can involve people I know in the mnemonic. For that word, I am not coming up with anything great (and hopefully will figure something out in a few days when I have to learn it).

Funnily enough, my mnemonic for 広 and related words involving it are surprisingly pornographic…so I have no problem remembering that one!

I’m the same way, WK mnemonics do nothing for me since they’re so random and out of nowhere. Helps a ton to read the vocab it appears in, if I’m familiar with even one of them it makes everything easier. Not to mention it helps to see the vocab because kanji tend to be abstract concepts and the name WK gives it may not suit it perfectly, so knowing what sort of words it appears in is more valuable than regurgitating WK’s definition of it. It helps later when learning the vocab, too.

I guess the closest one for me for something like that was for the kanji 丸 involved a character in SMT 4 Apocalypse named Maruo (who was a fat (round) hedonist). If you have ever played a SMT game, you probably can guess who he is in disguise…

Some have worked (usually the ones involving Shou and Chou for now). The ones involving Koichi tend to mess me up since (as someone who has played Danganronpa V3), I keep on seeing and thinking of Kokichi (which would naturally have a different spelling).

I also used a video game for 丸! There’s a PS2 game called Arc: Twilight of the Spirits. In it there’s a character called Maru and he wears a gold crown around his neck (it’s too big for his head) so I simplified the image of him in my mind to wearing a gold CIRCLE around his neck!

I used to have issues when just learning new kanji with しょう, かん, こう, and しゃ since in my mind all those mnemonics are for leaders (shogun, Genghis Kahn, Koichi, and Shaman). They’re all extremely different but I used them all in the same way and pictured them all the same. The nice thing is they all sound pretty different from each other, so over time kanji kind of look like they should sound a certain way.