I learnt the other day about yotsugana 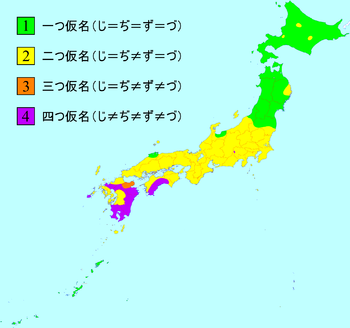 and it mentioned in that article that ‘etymologically-correct spellings [are] still permitted.’

EDIT: Also, are you planning on trying to learn a dialect that maintains the differences in pronunciation? That’s what the exceptions are meant to be for. The vast majority of Japanese you’ll hear in resources and on TV, etc, are not going to differentiate the pronunciations.

No I’m not - I copied the example from the bottom of the page - if WaniKani already uses tsudzuku then that point is moot. Also, yeah that’s kinda the point of this topic - for those wishing to learn yotsugana dialects (including myself) but items like 年中 don’t get given the reading ねんぢゅう, using ねんじゅう instead. WaniKani, as far as I’ve seen, uses futatsugana (if that’s the correct name), hence my two examples

if WaniKani already uses tsudzuku then that point is moot.

I’m not sure what you were expecting with つづく. In the article, つづく is listed as an example of something where the historical spelling was not changed because it’s a voiced character due to repeating. It was always つづく and the government left those kinds of words alone. Another one would be ちぢむ. The government had been changing づ to ず and ぢ to じ, but those types of things, where the voicing came as a result of repeating a character were left untouched. No one spells them in a different way from the historical way.

The reason that WK doesn’t give the exceptional readings is because they are hardly ever used in reality. The average Japanese person probably doesn’t even know that there are some places that allow the exceptional readings to be taught in school. If you spell them the old way, most Japanese people would probably try to correct you. So WK doesn’t want to give the impression that they are considered “equally correct” I imagine. Though if you’re just asking for a userscript or something, that people could install only if they know what they’re choosing, then I guess that’s anyone’s own prerogative.

a userscript or something

Well yes, a userscript would certainly solve the problem - but it seems to me like that would be harder to design - either a large list of all kanji/vocab where a substitution needs to be made or some advanced algorithm would be needed; a toggle down in WK settings would make this much simpler; the server just serves you the other readings.

Yes, I can see why having it on the WK side would be more technically feasible, but since they’d be seen as contradicting the standards they probably will not make something like that available to all users.

For example, dictionaries tend to not include the etymologically based spellings as valid modern spellings.

There you can see that ねんじゅう is the only modern spelling in the dictionary. The small characters to the side show the historical spelling, but they would be full sized along with ねんじゅう if they were considered generally correct in modern times.

For an example of another historical spelling that isn’t one of these voiced characters, see a verb that ends in う today.

So that’s why I think WK would not make them available generally.

Is there a place where one would go to request a script for this?

There is a Third Party Apps and API category.

WaniKani has an API. With it you can make apps to improve WaniKani (or make it worse, as is sometimes the case). Ask your questions about the API here. Look for and find WaniKani apps, browser extensions, userscripts, websites, and more. Just be careful out there, kids.

Thanks, I’ll go ask there

I was curious what a native would say, so without prompting her about this conversation, I wrote ねんぢゅう on a paper and showed it to my (native of Kansai) girlfriend. I said “what you would think if you saw 年中 written like this?”

Her response was “What would I think? I guess I’d think maybe a child wrote it, because children often make that mistake.”

Take that for what it’s worth.

Haha well that’s certainly informative, though from what I’ve seen so far words aren’t written in hiragana much if there are kanji - so even with that attitude it likely wouldn’t show much - these readings are as much about the pronunciation as anything else