Just read another ten pages of 夜カフェ２ and man, this story is really starting to hit home.

So I guess that means I can read well enough now for stories to have real emotional effects on me!

I’ll be happy to get to the part where everything is better.

Tono, Yukio. Research on Dictionary Use in the Context of Foreign Language Learning : Focus on Reading Comprehension . Reprint 2012. Tübingen: Niemeyer, 2001.

That’s all really interesting, thank you! Love to have some vindication for dictionary use

. I’m sure extensive reading has its benefits, but I just don’t like to read without understanding, so I’m pretty much permanently in the look up every word camp for now, heh. I’ve always gotten the impression part of the reason to encourage extensive is simply that a lot of people find intensive reading a drag, but it’s basically all I want to do. That might change, but probably not until I’m a lot better at reading. One of those personal tendencies I suppose.

I listened again while reading along and suddenly everything makes so much sense, probably should focus a lot more on listening.

I’ve been working on that a lot recently too! I’ve at least felt like I’ve had noticeable gains from making efforts to listen to something, read it, then listen again (as @pocketcat suggested before). If more of these have audio, that might be worth a shot?

So, it’s kinda weird to me, but why is he usually mentioned by his first name when other authors are mentioned by their family name?

According to my Japanese lit professor it’s basically that he’s so well-known/highly-regarded/canonized that people will know who you’re talking about if you use his given name, so people tend to. It’s the same with Mori Ogai I believe? It’s basically a marker for just how well-known they are as far as I can tell

Today I finished reading this week’s section for かがみの孤城 🪞 Week 24. It was a pretty moving backstory for one of the kids and I thought it was well-written.

Today I read two stories from ゲゲゲの鬼太郎, both from start to finish! I know, not that impressive, but I tended to always stop halfway for the day for one reason or another, so that’s a welcome change. I don’t know if it’s because it’s been a few days since I last read 鬼太郎, but I really liked both of them, and didn’t feel they were childish at all.

was used throughout the story instead of 船. Here the furigana make it obvious what it is, but elsewhere it was せん and it was driving me crazy, I couldn’t find it in the dictionary.

I also reached the halfway mark in 告白! I really wanted to keep reading, but had to stop myself - there are other things to do too, even though they’re not as fun.

Steam as well. I have the game set in Japanese.

was used throughout the story instead of 船. Here the furigana make it obvious what it is, but elsewhere it was せん and it was driving me crazy, I couldn’t find it in the dictionary.

Looks like you found one of the characters where the standardized version is different across languages.

(I noticed because your post didn’t make sense on a computer where I hadn’t set Japanese as one of the default browser languages, so it displayed the same as your screenshot)

So that’s why you had trouble finding it - per wiktionary:

The top-right part can be either 八 or 几, depending on the script

Ah, so it’s the Chinese equivalent!
It can’t have been an encoding problem on my end though, as I saw it in a manga (so it was a pic) and I looked for it by radicals and handwriting. Who knows why the Chinese character was used in the manga. They’re very similar in any case.

I’ve finished reading this weeks BBC book club. I’m getting through most sentences with ease, maybe because I’m coasting heavily on the context, maybe I actually got better, doesn’t really matter, both should work out in the end.

I haven’t made a post for a while! I’ve just been checking my days off here and there.

I’m keeping up with the 佐賀のがばいばあちゃん book club, which makes me happy.

I read one very challenging page in 透明カメレオン since the last written update. It was talking about a really specific hobby around building transistor radios. I’m hoping if I can squeeze past this part it’ll get easier again

Also, I’ve been reading Japanese for work! Headquarters hasn’t translated the latest internal magazine into English yet, and I want to highlight some of the material for our team in the UK. It’s pretty cool that Japanese is becoming practical!

Even if I’m not posting everyday, I’m scrolling through to see how you are all doing. You guys are the best.

I would suspect it’s just a font thing, maybe because it’s an older manga? I can’t find anything specifically saying when the form changed in Japanese but it’s possible it happened later. That’s just speculation though!

I’m planning to keep reading with the offshoot club, so I’ll be starting Volume 3 in a week or so.

I’ll keep this shortish cause I have things to run off and do today, but reading was good! I pushed to a little over 7000 characters – since my soft goal is really just about pushing myself when feasible, and ok to miss, I think I’m going to bump from 6000 to 7000 each day to continue progressing. And hey, this means Nomiki’s stuff wasn’t really noticeably any harder to read 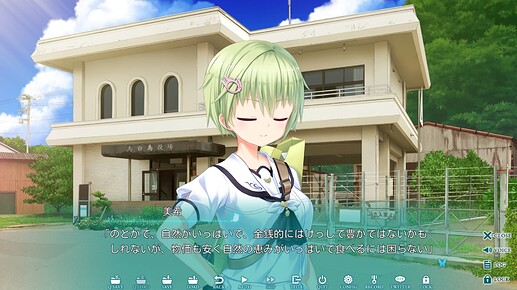 And there she is, island rule enforcer with her water guns.

I’ll just leave you with this: I came across 地獄絵図 (じごくえず) today, “a picture of hell.” Most images you find searching that give me vibes of a slightly less weird Hieronymus Bosch

I finished the volume last night!

It was a bit of a pain because Dio was back once again, but his grammar was a drag because it was difficult to read most of the time. It was nice to see him drawn beautifully though.
I had really hoped with this part to judge for myself if he makes a woman eat her own baby, since it’s a popular opinion/statement in fandom. Personally, I’m of the opinion that if a character is given a choice with dissimilar outcomes then that’s not them being made to pick A over B or B over A. I’m positive in this case that it is proposed dissimilar outcomes or at least ones where neither character were assured that the outcome would be the same - that is the mother had the choices of being turned into a zombie or being attacked by them. I don’t feel like it’s a given that she would be the one to kill her baby. I think the point of Dio even offering this choice was to see if the sacrifice of the mother would lead to harm to her baby just as his mother trying to shield him from Dario’s abuse lead to her own death and subsequently Dio receiving all of the abuse. Vampirism (Dio)(and zombiism (? Tarkus and Bluford)) do not lead to corruption of ideals in the case of strong willed people. If it was Harry Potter, then the lesson would be that a mother’s love and sacrifice can protect her child. But it’s JoJo. That’s why I don’t think that he made her kill her own baby. However, I can’t figure out what he’s saying in the situation with absolute certainty.

I’ll probably need to come back to the scene after I make more progress Japanese-wise. I think I might watch the anime version of the scene later tonight to try to distinguish, although the anime changed more than I thought it did in general.

As for the next volume, I kind of want to binge it if I finish all my chores quickly tomorrow. Volume 5 changes from Part 1 to Part 2, and I have no intention of reading Part 2 any time soon. That means this’ll be a short volume for me, about 140 pages.

I’m not reading today. My 16-year-old dog died this morning.

My condolences. Take time to grieve.

A tiny read today. They made it to the volcano though :3 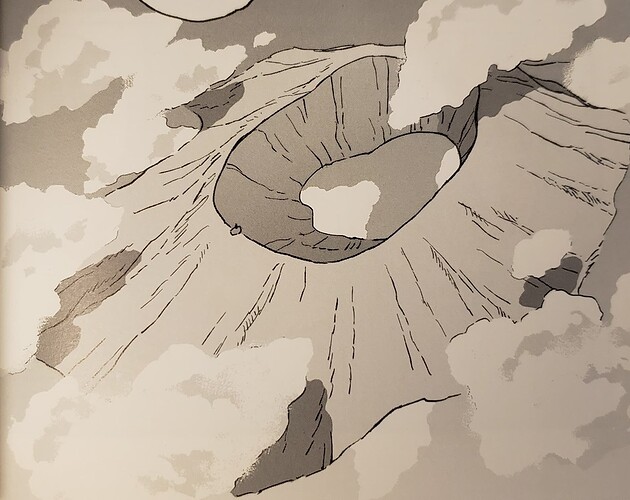 Look at the way the bear is sitting 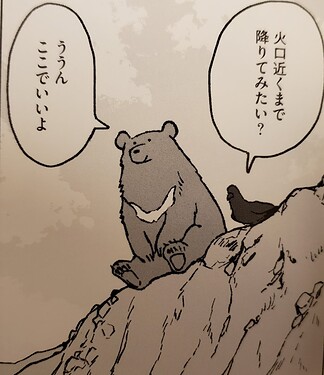 So sorry for your loss

小泉 八雲 (whose real name is Lafcadio Hearn) lived in Japan for 15 years (until he died) and allowed the West go gain a deep glance into the old Japan.

I’d never heard of this author so I googled his name. I just read the Wikipedia article and am amazed at how much writing he did and in so many languages!