I did read this again today xD We got the classic intro list of some of the various items for sale in the shop, and I think my favorite has to be ピノキオポッキー

I forgot how much I like the tone of these books. It feels comfy, like I’m reading a book from my childhood. I would have read this when I was younger.

Does anyone else accidentally learn cool new words while looking stuff up in Jisho?

Like today, I was looking up とうとう, which in this case meant “finally; at last; ultimately; in the end​,” but right below that was another とうとう (滔々), which is an adverb or adjective that can mean either “torrentially; swiftly flowing (water, esp. river); voluminously flowing​,” “(speak) eloquently; fluently; spout forth (a torrent of speech)​,” or “flood of the times (moving strongly in one direction); current of the times.” What a cool word? I feel like this happens to me a lot.

It’s a dumb joke but hey, I understood wordplay!

I remember the first time I ever laughed out loud at a dumb joke like that in “real time” (meaning I “got it” without having to pause and try to look something up). It’s such a fun feeling! I’m not much for that kind of wordplay in English but it’s so fun in Japanese xD

A friend gave me a piece of this when I was doing my Master’s in London saying that it will be sweet. It wasn’t sweet. I’d said that I only eat fruits that taste sweet to me and she wanted to prove me wrong.

Edit: does anyone know how to get the blurred furigana while using the ‘hide details’ tag? I’ve tried to quote people’s posts when I see it but I can’t seem to get it in between the quote marks for Summary. Am I doing something wrong?

April 2
Read 4 more level-0 books. Going to not try to burn out on them by doing too much at once. Just stop once my attention starts to wander.

In the reader on how to make tea, I got curious if the 湯 in お湯 is what I see on the bathhouse in Spirited Away. It’s not, but it is used in Yubaaba’s name (湯婆婆)

In other reading practice news, translated two more paragraphs of that grammar page I was working on yesterday.

Gonna switch over to watch Love is Blind Japan with Japanese subs probably.

I think this is みたむら しげる. 警視 is just his title. Looking at this it seems like there’s a couple readings for this kanji when used as a name, but しげる is the only one I can think of commonly hearing by itself.

Also don’t know if they’re important yet or not, but 片山 seems to have a colleague named 岡田 (おかだ). I’m only just past the prologue now so maybe they never show up again

EDIT: Btw thanks for putting this together! It’s a handy shortcut for me so far!

Ah, right, I don’t know how I got confused there, thinking 繁 was part of his title and that his name was nowhere to be seen.

Thanks for pointing it out, I corrected it in the list.
I have the colleague (who indeed hasn’t appeared again so far) as りょうた a little further down in the list. Is おかだ the correct reading?

Oof, I started to realize a second before you posted this. Corrected, and I need to add 両 and 岡 to my “easy to confuse kanji” list…

The cover is totally what drew me to it first, they’re all so pretty it makes me want to order all of the other volumes lol. Sounds like you’ve read some other sea creature books, have any recommendations?

Caturday, a.k.a bookclub day 2, going for the more complicated ones this time.

It’s somewhat disturbing that I can read the triple number of pages of 夜カフェ in the same time as 三日間の幸福 =._.= 夜カフェ’s sentences feel concise and direct, while 三日間の幸福’s author just loves these sentences that have a lot of sub-clauses filled with analogies that take me a while to untangle. 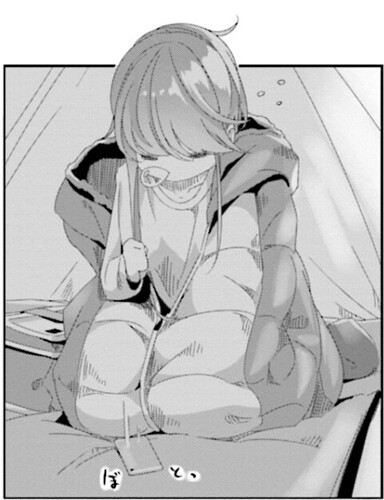 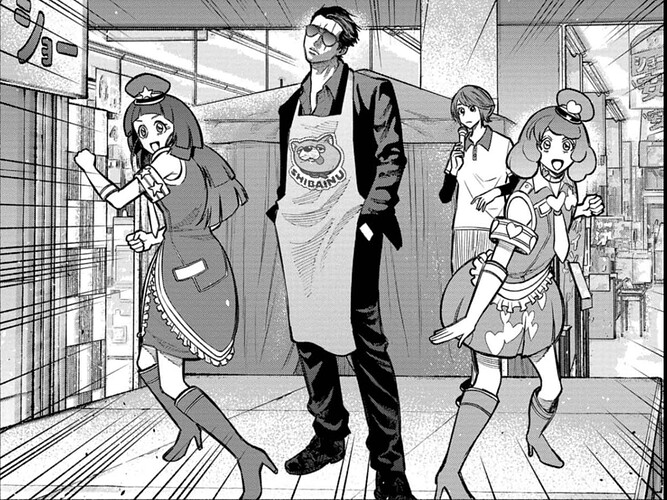 As usual 極主夫道 has some really hilarious situations.

As expected, I ended up doing eenie meenie miney mo to pick which manga I’d read next, which got me GREEN～農家のヨメになりたい～. I read Seed 1 today. I’m enjoying it so far. Our protagonist Wako-chan is a Tōkyōite born and raised, but ever since living in the countryside for a year during 5th grade, she’s had a sort of fascination with rural life. She falls in love at first sight with Makoto, the son of a farming family who’s training to take over his grandparents’ farm, and starts helping out when the guy who usually does so can’t make it for a week. Despite her ulterior motives of wanting to spend time with Makoto, she does genuinely want to learn to help out around the farm and do the job well, but she’s… bad at it. Which it seems will be the main source of conflict (and humor?) for the series.

I happened upon all 4 volumes last time I stopped at Half Price Books, and I’m glad I did. It was difficult to stop with just one chapter today, and I might not have, except I had a novel in English (Inkheart by Cornelia Funke) that I’ve been (re)reading for a while and I wanted to finish that too. I probably won’t read in English every day, but I have been wanting to read more again in general because I’ve got a lot of books that I still haven’t read as well as a bunch I haven’t read since middle or high school and who knows if I’ll still like them anymore, and now that I’m buying books in Japanese, too… Well, my unread-book situation was already out of hand before this.

I read 6 pages of 2.43, up to the first break in ch 1-2, putting me at pg 34 of 281. It’s actually fewer than 257 pages that I gotta read this challenge. These books don’t have pictures aside from on the 目次 (unfortunately; Yamakawa Aiji-sensei’s art is very pretty), but each chapter has a cover page, and one chapter ends only a couple lines into a page, so it’s more like 254 pages, probably. That’s still an average of 4 pages needed per day, though.

1-2 starts in the same place that ep 6 does, with Fukuhou failing to advance past the 3rd round at Inter-High, which is about as far as they ever get in national-level tournaments. They’ve represented Fukui at Nationals for 8 straight years, but they’ve never won. The title SETBACK could refer to their loss yet again here, especially as this is their second-to-last chance to win at nationals, but also the very first word of the next section is 怪我, so I think we’re still getting Ochi’s injury. I mean yeah, Subaru’s injured both his knees too, but it makes sense to get Ochi’s background here not just because this chapter’s from his POV but also to explain why he’s their manager and not a player.

So much VLR today, we love the weekend

Still so much going on, there are so many things being hinted at and I have truly no idea where some of them are going

Anyway I have a lot of feelings, and I’m very curious to see how things continue

Favorite word of the day: 報連相

Ah funny you mention that, I like just learned it at this school business manners workshop thing and she also was like “you know spinach?? not that”

It’s a dumb joke but hey, I understood wordplay!

I can’t seem to get it in between the quote marks for Summary. Am I doing something wrong?

Some things don’t seem to work when they are inside these dropdown boxes, e.g. I couldn’t get polls to work inside them. If your blurred furigana work outside of the dropdown but break when you move them inside, then you‘ve found another thing that can’t be in there.

does anyone know how to get the blurred furigana while using the ‘hide details’ tag?

The day might not be over yet, we’ll see, just did some morning reading because I’m not sure if I’ll be free later tonight.
I’ve read 4 pages of 夜カフェ sofar. This feat took me 1 hours and 11 minutes, so around 18 minutes a page. Considering the wall of text aspect of it, I think this is acceptable for now. For reference, the recommended amount for this week comes out to about 15 pages, which I would be able to achieve at this rate in about 4 days

日本語: I read a fair amount of ミニスカ宇宙海賊, a bit of からかい上手の高木さん 17 (and finished it), and a bit of ヨコハマ買い出し紀行.

中国語: I read an intermediate entry on Mandarin Bean, two pages of some random 漫画 (apparently called 骑士幻想夜), and a bit of 孩子最爱读的中国民间故事.

Fixed up my Bookmeter
Read: 夜カフェ
Finished first 1/2 of Chapter 2 (8 pages)
Time:16 minutes
Read this week’s part for the Beginner’s book club. This (and the Jack Jeanne light novel) are my first times reading Japanese novels so I’m not really used to reading vertically. I still occasionally lose my spot or accidentally reread a line but it feels like I’m starting to adjust the more I read.

does anyone know how to get the blurred furigana while using the ‘hide details’ tag?

There is another way for details tag => vanilla HTML.

10 Likes
[Userscript] Forum: IME2Furigana
How to write Markdown inside HTML in this forum?
← previous page next page →