The 見合い scene was kinda boring and felt like filler, just like @pocketcat said. Also, it felt like this section had twice as much new vocabulary as the others

Place names
赤坂（あかさか）a district in the main/central area of Tokyo.

Last night ended up ridiculously busy with various little things popping up, so 23 pages is what I managed over the course of a good 4 hours of interrupted reading. This leaves me with 55 pages left, which I doubt I will manage tonight what with some errands to run and a promise to call a language exchange partner. Good news for everyone else catching up to my spoiler posts though!

I’m still on track to finish by Saturday, which is what matters to me.
I’m currently somewhere in the middle of 4.2, 84% done. No spoilers for today - I actually left off right as something appeared to be about to happen because I had to go to bed and knew I wouldn’t be able to finish it!

Although it’s just 2%, today’s part was filled with so many emotions! Also I encountered a few interesting phrases.

I had finished reading volume 2 of Yuru Camp sooner than I expected and I just bought volume 3 on kindle today, so I’ll be continuing that for a little while longer. Thought I would add some screens down below.

Noticed it’s turning more into a cooking manga than a camping manga lol. Next update should also be soon, as I’m close to finishing Yoru Cafe.

I don’t have a link to anything today, because instead I have been listening to 兀突骨「ごつとつこつ」and was like… wait, this is Japanese… I’m learning Japanese… I can use this to learn even more Japanese about samurai, deadly battles and all that sort of fun stuff. Unfortunately the lyrics seem to be nowhere to be found online and I neither have any of their CDs since they are hard to come by and expensive one day, one day… so I’ve just gone through the song titles.

On the off chance that someone here likes death metal as much as I do here’s a song:

I’ve been lurking so far, but! I managed to read 11 / 13 days in April so far.
@NicoleRauch programmed this beautiful Excel heatmap for me to track my pages read each day:

I finished the titular short story from 海の見える理髪店 today, which I’ve been wanting to read for a while now (to get an entry for the Naoki Prize Reading Challenge, and because I found a 朗読 by Saitō Sōma of the first 30 pages on YouTube, so I “read” the first half of the story along with the audio, and then read the remaining 20 pages today.

It was a rather relaxing story, which was to be expected, but I know there was something more there. Something implied, a deeper connection between the two characters. But this wasn’t really made explicit, even though I felt it would have made for a nice twist at the end. This way, I’m left speculating and interpreting by myself, which is a rather odd feeling.

On to the second story, いつか来た道! (there’s six in total)

I was able to keep playing Ace Attorney today! I think I’m putting it on hold for the time being, though. It’s too bad, but the game requires more attention and stamina than I’m able to put in right now. It’ll be nice to go back and play it when I’ve learned more grammar!

I guess this is more about listening (does reading subtitles count?), but I went on Netflix and noticed that はじめてのおつかい is available to watch in my region now (maybe elsewhere, too?). I’d never heard of this show before, but I’ve watched 10 episodes with japanese subs already. I can’t with these tiny kids running errands for their parents

I am so glad I started this challenge! This is the first time I’ve done this, and I am really enjoying it. It has also been a revelation that I CAN read Japanese, and that is so motivating! I never thought I was that far along in my studies. Even being on a baby level is cool.

Just a short recap of the last three days. I’m still reading. Just didn’t update.
Well, I started 魔女の宅急便 on Sunday already, although I only read up to page 9. That is were I had stopped the first time I started the book some months ago.
These three days I read up to page 30. While it is a bit easier this time around, I still have some difficulties with the book. I find it harder then 夜カフェ. Hopefully it will get a little easier once I accustomed to it. It’s not that it’s unreadable though, it just doesn’t flow so well (if that makes sense).

I am so glad I started this challenge! This is the first time I’ve done this, and I am really enjoying it. It has also been a revelation that I CAN read Japanese, and that is so motivating! I never thought I was that far along in my studies. Even being on a baby level is cool.

Aw yeah! The magic of this challenge is real

So lovely to see everyone making such strides with their reading

After having watched this video, I’m trying a new approach to reading: I read a couple of pages without translating them, once or twice. And only then I look up new words. This made reading more pleasant and fluid so far.

Oooh yeah that’s good, I should probably try to do that more lmao. Having things to read in both ways is a really good way to go about it I think, I’m just so bad at not looking things up, it absolutely kills me

I have to know!! Hopefully as the number of things I don’t know decreases I’ll get better about it but idk, the perfectionist tendencies run strong

And I’ve said it before but yeah I’m being reminded how weird it can be to evaluate visual novel difficulty. It’s not an easy medium.

For real, I think slice-of-lifey stuff especially can be really deceiving. Maybe because there’s less of a central concept driving specialized vocabulary, it just ends up even more all over the place? Idk but as off the wall as Zero Escape gets sometimes, I’m not sure it can even compete with Summer Pockets

It’s my b-day and I got a Satori Reader subscription as a gift from my father so I read the first bit of コナの大ぼうけん and really enjoyed the easy lookups and Wanikani integration vis-a-vis furigana:) I expect I’ll be alternating between よつば and コナ going forward.

Edit: Hah, I posted the kanji image from last time instead of today’s, oops.

Well, this route continues to be unexpectedly hard. You never can predict where it’s going to go. I feel less bad about it today… honestly less bad in general at least at this exact moment so I wonder how much my more frustrated days come in part from a degree of depression (hey that’s sure a thing post-covid), but I’m gonna veer off that topic for now heh. I knew I’d have less time to read today so I’m not too concerned about the 2700 characters read. Might slip in more later, might not, whatever. I’m just happy to hang in for the moment.

Because let me tell you, it’s rough. Part of this route has been about going overly 中二病 . Within the plot the characters are aware and reference it being exactly that, but they’re sort of reminiscing or otherwise referencing how they acted when they were a little younger. So you get lines like this:

Soon after that the character started shooting magic beams and summoning people or something in gibberish katakana and… well, here I am on the other side of it! Happy about that part haha. 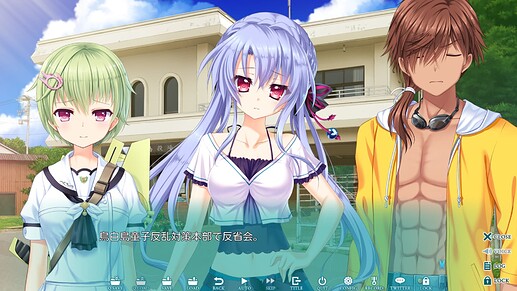 But then we arrive at conversations like this. It’s a little “wow what a block of kanji” but also even if I kinda know the characters involved and could intuit some meaning like we talked about last thread… there are just so many words there I have to do that for (the first is the island name though). And it’s fine, again, today’s a relatively good mental day so, genuinely, whatever. But I gotta air out my struggles just to feel heard as I wrestle with this, haha.

There’s nothing that truly excites me on the new word front, though I do find it cool that 火に油を注ぐ (ひにあぶらをそそぐ) exists as a phrase. Adding fuel to the fire, making things worse, it’s very directly comparable to English in that way.

A bit of a busy day today, but I did manage to read five and a half pages for Week 2: 佐賀のがばいばあちゃん 👵🏼. The first confrontation with the grandmother’s accent!

So far I haven’t found this section as tedious as others have said, although the unknown vocabulary did increase noticeably! The お見合い was interesting to me from a cultural viewpoint if nothing else. It was mildly funny too, and I still hold out hope that it may somehow turn out to be significant (and not just as the trigger that gets Yukiko and Katayama together. I wouldn’t welcome such a development, I need my detectives awkward and miserable, not happily in love.)

Fun katakana words again in this section! It took me a a second or two to decipher ドラキュラ.

Happy birthday! Such a cool gift!

I finally finished コナの大冒険 on Satori Reader!! And I started on ジャム屋さん even though I told myself I wouldn’t start any Satori stories that wouldn’t be completely published by the time my sub’s up

I bought some reading rulers to help me keep my place, and its really helped me.The ones I have are opaque, with a transparent stripe so that I can focus on one line of text at a time which is especially useful when I need to look away from the book to check vocabulary and then find my place again

(sorry I didn’t respond until now) A reading ruler is a good idea! I don’t have one but I assume a piece of paper would work fine, I’ll have to try it next time I read 夜カフェ

I just finished the last book in the Level 0 Graded Readers, Set 1. It’s about a policeman who helps an old lady carry her packages from store to store, and then to her home. They go up, down, left, and right. When he helps her home and gets ready to go back to the station, he realizes he is totally lost!

Tomorrow I start Set 2. I’m excited about that.