No longer holidays… I’m trying to improve my time management so I can do more of the things I actually want to do, like reading and studying Japanese. I did fairly well today, but let’s see if I can do better tomorrow!

Day 20 already? When did that happen?

Anyway, I think I went two days without reading/doing something reading-related* like looking up vocabulary. I did finish reading part 3 of 燃える though and started translating the first 3 1/2 pages of it. I will continue to translate today, and the next two days or so. Depends on how much I manage to get done and how much I need to do the next few days. Spring-cleaning, my friends - a hairy situation with cats

Read up to the beginning of page 36
Translated up to the first line of page 27
Vocabulary: A lot. With some vocab probably twice or more, so a final count is pending.

*I did watch a ton of 名探偵コナン while crocheting/stitching and I looked around on Bookwalker for some stuff and freebies. Does that count?

On monday evening I started reading 銭天堂 and I had noticed I made a mistake with the title. I wrote 和菓子屋 instead of 駄菓子屋. I fixed that now. The first chapter was pretty interesting and was able to finish it in one go. Not sure how long it took, but it did get late. Slowly getting used to more hiragana. I also found it interesting how furigana was used. They would introduce a word or name added with furigana and then stop using it for a while. Later on they did add back furigana, so I’m thinking they went with feeling rather than a general rule.

Because they all have different stories I thought it also felt more natural to take a break the next day and start reading 猫奥 vol 1. This manga is all about the life inside the woman quarters of Edo castle called 大奥. Basically a system inside a system to serve the shogun. The main character is one of the court ladies that has scary expression on her face. It has become pretty popular that they get cats to pass the time, but she never got one. Her senior ladyship does own a cat called Yoshino and he keeps going to her place all the time. It’s a pretty funny contrast and the cat is pretty cute.

Took some screens from the first 6 chapters (they’re pretty short ones) that kinda sells the idea of the series. I’ll be reading this alongside 銭天堂 for a while.

But ordering from Japan also has the shipping cost attached to it, so that would not make (much of) a difference for @dunlewy I guess?

About a son who looks after his parents well (it used the filial piety word!) even though no one has much money. One day he stumbles upon a waterfall that produces sweet-tasting liquor, which, when drunk, makes you go like this:

Honestly same
It does give you something to look forward to though, so it kinda balances out

Okay, so. I started reading something new. But it was not my fault, okay? I mean, Bookmeter gave me those coins for my birthday. But they are only valid this month. And of course I could not let them go to waste, you know? But there was this big sale recently, and I got everything I wanted for the time being, so my wishlist was pretty empty. And I was really thinking hard about what to do with these coins. Well, and then there was this talk over in the other thread…

So I guess now I also landed in pulp hell

Please do share how you find it! I am tempted because gay pirates but was a little put off by the very cheesy cover lol.

I am tempted because gay pirates but was a little put off by the very cheesy cover lol.

Today I actually checked the tags and discovered it’s 女性向け

I’m still on chapter 15, only had time for six phone screen pages.

Seems like they already discussed it in the book club threads, but I find it funny when there’s a gairaigo in the furigana when it could just have been the actual reading of the word. Like in = pocket, but it’s not a legit reading for that compound. Reminds me of = page, except that actually is a legit reading, lol.

It’s not much, but today I read the final chapter for ヨコハマ買い出し紀行 🛵 Volume 5 because I wanted to finish the volume.

I also played a couple of hours of 第2次スーパーロボット大戦OG (2nd Super Robot Wars Original Generation) which also counts, given the amount of dialog in that game. The last time I played it was a number of months ago and back then I could only read a sentence here or there, but I was glad to find that I can now read most of it without too much trouble (and even spot the mistakes in the fan translation)

I really have to continue with かがみ tomorrow, otherwise I start falling behind…

I had visitors today so less reading time than usual! But I read 2 chapters of Shirokuma Cafe. There is something very cosy about this manga, so its a nice thing to read after a busy day

Yeeaaaah, that’s kind of my expectation tbh! Still, could be some silly fun!

Or, at least, what the author thinks girls think a gay pirate story would be

Aren’t a lot of BLs listed as josei, though? I know there are ones written for guys too, but it’s been my experience that a lot of queer stories are josei

I tried looking into that series the other day when it was first brought up to see if it was something I’d be interested in. It seems the first volume mostly just sets up the world/story, and the romance happens later. It seems it also gets very whumpy toward the poor MC in later volumes. And even though he’s 17, everyone seems to think he’s like 15, which makes the fact that at least one adult man falls in love with him even grosser. I have no idea if his actual love interest is also a teenager or not, but, I decided that even if his love interest is age-appropriate, the series wasn’t for me, so I didn’t try to look any further

Welcome! To both the challenge and the forums it seems.

One day he stumbles upon a waterfall that produces sweet-tasting liquor, which, when drunk, makes you go like this:

I love that image, and I think I have a new dream for my life now. Time to start checking waterfalls.

Today I read about 7500 characters! Nice little bump upwards. Also late last night I decided to spend a little more time on the game and totally finished Umi’s route, so that’s even more significant progress! Today I started hanging out with Kamome: 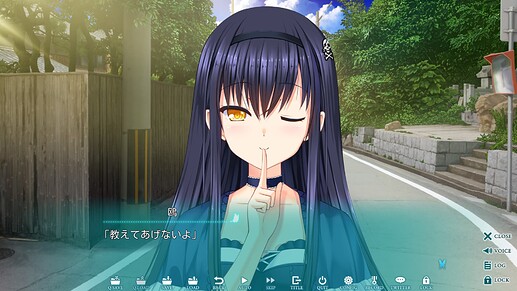 She seems fun. Very playful character. Most of the time that leads to really short basic sentences that I can breeze through, though at times she starts speaking in ways I struggle with, stuff that I think is meant to be a little goofy. One of those very strong “do not copy speech patterns from this character” types, though that’s everyone of course to some degree, haha. Overall though, my first day impressions are that this is going to be a relatively easy route, which I appreciate. After this I expect the next one to be simple enough too, then we get to the two characters I’ve been putting off for anticipated reading trouble.

Anyway, her route involves a sort of treasure hunt, which seems like it’ll be a lot of fun. Total carefree summer as a child vibes (for now at least), wandering around looking for cool “secret” things.

One nice little victory was reading that today. It’s not written in a difficult way, but I can recall when even the slightest font differences short circuited my Japanese ability. There are many super hard fonts or handwriting out there that I’m no good at, but it pleased me to be able to read all of that slightly handwritten style text.

The best new word I have is just 思いを馳せる (おもいをはせる). The Japanese definition I have is horribly long, but the translations on Jisho are pretty evocative themselves: “to send one’s heart out to,” “to think nostalgically upon,” etc. Not just any think but a real specific, meaningful think.

Read another short Tadoku story about a foreign 学生 Ken working in a コンビニ and not quite knowing how to interpret what お客さん answer him when he asks if they need a plastic bag.

What tends to be the difference between the two? I feel like I hear that distinction made a lot but I don’t know exactly what it means

I do find it kinda weird that whenever there’s a manga about gay people written for women there like “has” to be an uke and a seme? I’ve only been in straight relationships before (kind of? it’s complicated but), but that seems like a very reductive/restrictive way to think about people/relationships.

There’s also the like “but we’re both girls/boys” trope that always comes up for some reason? Or like when the characters are only same-sex attracted for high-school purposes

Today I read 20 pages of わんわん探偵団 (1). The book is for kids but I already bought it one year ago for the reading club and because I was bored I started reading it yesterday. It’s way easier than my other books.