Unless I am very confused (not unusual) there is a problem with the reviews of this word in level 31. Sometimes the correct answer is hantumari and sometimes it is hanadumari. Am I missing something??

yup, if you type just はなづまり it’s literally the only result. the two kanji form is a more rare form that merely used here to illustrate an alternate reading.

To put some numbers on it, the wwwjdic ngram lookup puts it at about 72% 鼻づまり to 26% 鼻詰まり, so while the 2-kanji form is definitely rarer it’s still out there a fair amount.

I feel you may be misremembering, because it does not. 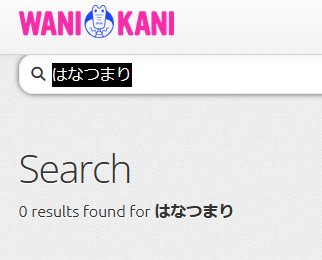 Idly wondered if maybe it used to and was changed, but it’s not showing up in any of the change notes, sooo…

How do you know it expected はなつまり?

Are you 100% sure you didn’t type something wrong like はなずまり? I know sometimes if I’m not thinking, I have swapped ず and づ. It’s a weird mistake that I make now and then.

It is a level 31 word. It is taught in the single kanji form, but WK sometimes wants one response and sometimes wants the other. How do I bring this to the attention of the WK staff?

It wouldn’t be the 1st time I have been wrong but I keep stumbling over it. Just happened again.

I mean, you can always email them about it (hello@wanikani.com) same as with other feedback.

But this doesn’t seem plausible without some direct evidence of it changing.

Install an undo script and use it when you encounter it not accepting the response you’re expecting and resubmit it with the other. Does it work? It sounds like a case of mistaken identity. And also, screenshot it when it occurs so you can post it and tag an admin.

I’ve just tested this and はなつまり does not appear to be an accepted reading currently, but, as others have said, if somehow you do encounter the error again, please take a screenshot and let us know. You can do so by tagging us here (use @ mods) or you can reach out to us anytime at hello@wanikani.com.

Thanks a million to everyone that came to my aid here. I read all of the comments assuming they were correct and finally cleared the at least some of the fog out of my head. As was suggested I was blindly confusing two kanji that I knew pretty well and thus confusing two words.

The WK community is an amazing asset!!