I guess now that my review counts are finally starting to go down five weeks after finishing level 60 it is time for me to write the customary level 60 post. Here, I would like to reflect a bit on how I fared on my journey, what I liked, what I did not like and where I expect to go next on my journey to learn Japanese.

Where I came from

When I started to use WaniKani one and a quarter years ago, I had already been studying Japanese for quite a while, but never committed to do extensive self-study. I had taken classes at the local branch of the Japan Foundation for five years then using their Marugoto line of textbooks. So, I came in already knowing quite a few words, although I had been a bit lazy in the vocabulary department the past one and a half years.
At that point, my two main weak points were listening comprehension and definitely kanji. The first I started to tackle by listening to a lot of beginner and intermediate podcasts, primarily those by Teppei and Noriko, and the second brought me to WaniKani.

How I went about it

Since I already knew a bit of Japanese and also some kanji, I immediately started going on a fast pace, but I really only settled in into my steady rhythm after reading (parts) of the Ultimate Guide. Applying what I had learned there, I structured my lesson timing and settled in into a weekly level up rhythm.

LevelUp1088×421 113 KB
Leveling up weekly was quite convenient since I had aligned the busy days with my weekly schedule for other activities like my (now online) Japanese lessons. For quite a while, the workload was still very bearable since my accuracy was still quite high. At level 45 it was at 98,5%. At the end of the level 60 it had dropped to 97,4% and now, it is even lower. 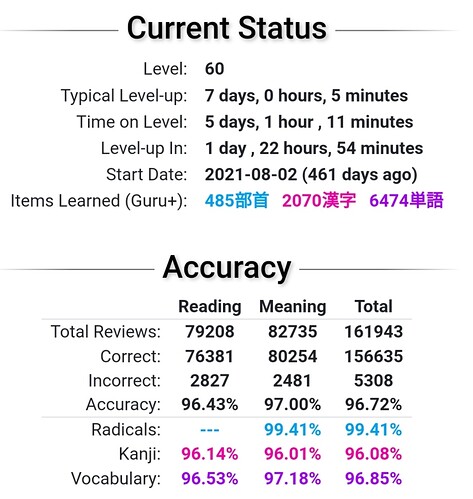 stats918×970 170 KB
I should maybe say that one should take these statistics with a grain of salt since I used the DoubleCheck script and, admittedly, cheated a bit in the higher levels to the levels coming weekly. (I have avoided to cheat on burn reviews, though.) However, without the script, WK would have been impossible for me to do since I did it exclusively on mobile and my fingers are simply to fat to avoid a large number of typos.

I think the one thing that caused most of the deterioration in my accuracy, apart from the vocabulary and kanji becoming more and more obscure and samey towards the end, was using vacation mode. In summer, I had to take a break because I got burned out from a very stressful phase at work and thought I should also not stress myself with reviews in my vacation. That turned out to make things just more stressful after the vacation; I probably had an accuracy of about 70% for at least two weeks. That lead to even more reviews, which does not help the accuracy. Still, I wanted to get it over with. So, I kept on doing lessons and adding more reviews on the pile that way, which is hindsight might not have been the most intelligent approach. 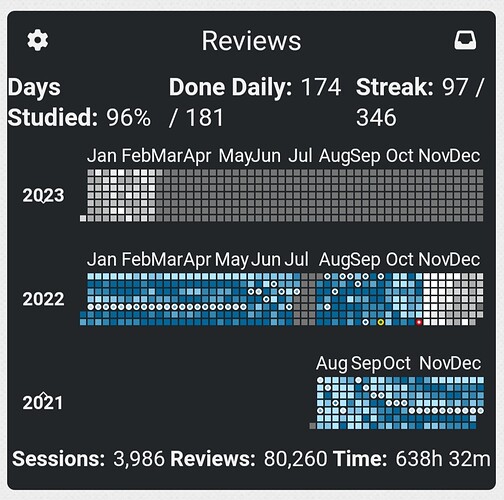 Heatmap992×983 234 KB
Well, it brought me over the finish line at last. There, a lack of time due to another stressful time at work made me accumulate a large pile of reviews I took over from day to day, a thing I had avoided before. That again screwed up my review timings and made accuracy drop again. Now, I think things are getting back to normal and I can finally enjoy the lowering number of reviews per day.

Here, I would like to convey some of the things I have learned about what seems to be important to make the most out of WaniKani.

I guess these are the main points I learned and wanted to convey here, For everything else, just refer to my first point.

Would I recommend to go at full speed?

No, I would not recommend to go that fast. I did this for the most part in the time when socially nothing really happened due to the Corona pandemic and I already knew a lot of the vocabulary. That made it possible for my to do one level a week for a long time. However, it was rather stressful since you have only about three hours of leeway to get the new radicals and kanji in each week. Under normal circumstances, I think that is just too tight.

What I liked about WaniKani

I think the thing I liked most about WaniKani is simply that it works. Now, after all those levels, I can read simpler texts, e.g. on NHK easy, without much problem or need for Furigana. Admittedly, from time to time I have to look up a kanji I actually have burned at some point, but then it is immediately clear again. (More complex texts are still beyond me, but that is more a question of vocabulary and some grammar.)
I also really liked the mnemonics, at least for the most part. They really helped me to keep all those readings in my head, especially the more complicated ones.
In addition, I just like that WaniKani offers one opinionated path through all those kanji. I am just too lazy to come up with a good learning order or spacing myself and WaniKani just gives me a good working solution.

There are a few smaller things that I did not like about WaniKani.

Where I want to go next

Well, first an foremost, I will continue to use WaniKani until everything is burned, which will probably take another two years at least. (Some of the items just do not want to stay in my head.)

Apart from that my current mid-term goal is to read 鋼の錬金術師 and play Persona 4 Golden and Persona 5 Royal in Japanese.

Unfortunately, I had to realize that I am not quite there yet. For one it became clear to me that after all those courses I have taken my grammar still is not where it needs to be to read most texts. So, I will finally start again to do more lessons over at Bunpro. In addition, I will finally pick up again my easy reading immersion by continuing to read ふらいんぐうぃっち (I am currently stuck on volume 2 due to lack of time) and then see which other intermediate manga strikes my fancy.

On the long run, I would also like to learn how to write the kanji. On one hand, it kind of annoys me that I cannot write any decent Japanese on a piece of paper and, on the other, I think learning to write them would really help me to further cement them in my brain. So, if someone knows a place with an SRS style course for writing kanji, preferably supporting touch input, I would be grateful.

In addition, I think I will look for a place to learn the remaining Jouyou kanji and N1 kanji somewhere else at some point since WaniKani does not cover them all. However, I think that can wait for a bit. 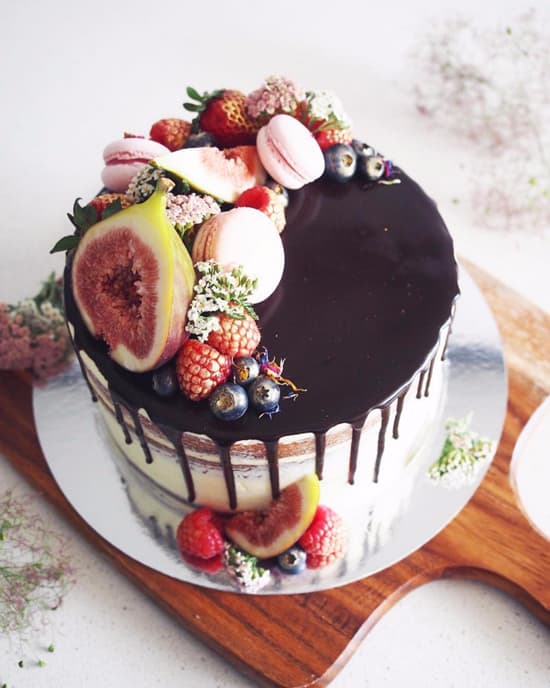 congrats! I definitely agree with you on the adding notes to differentiate kanji with the same english word as the meaning!

I always appreciate people taking the time to tell us their struggles and successes with WaniKani, because it puts all effort put into it oneself into perspective.

As for writing Kanji, personally I use the app Ringotan. Touch input, free of charge, and items have SRS stages. However, it won’t give you an overview of reviews coming up like WaniKani, as it explicitely says that you decide the schedule.

Thanks for the suggestion. I will have a look at it.