Is there a way to add more dictionaries to the Bookwalker app?

So I’ve been using Bookwalker to buy my Japanese ebooks and I do my reading on the Bookwalker app. I have both an iPad and an Android phone, and the app is installed on both. I don’t find the app too bad overall, but I’m a little frustrated with the dictionary usage.

On Android, the default dictionary is Google Translate, which is just terrible. Looking up kanji only defaults to Chinese, the reading is written out in romaji which is very distracting, and it doesn’t give definitions, which is what I’m looking for, but attempts a straight translation, which is often way off the mark. IOs on the other hand has two quite good dictionaries pre-installed, a J-E and a J-J one. The J-J dictionary catches many more words than the J-E, but I’m not yet ready to work at understanding the Japanese definitions as well as the book I’m reading. So when the dictionary comes up with nothing, or offers a definition for a completely different word in case of homonyms, I just turn to Jisho or Takeboto. But I’d really prefer to not have to switch between apps or devices while I’m reading as it breaks the flow.

So my queston is, is there a way to customize dictionary usage through the Bookwalker app, either on Android or on iOs or preferably both? Could I get rid of Google Translate on Android and have it use a different dictionary from within the app? If I were to buy a new dictionary through the dictionaries app on iOs, would it automatically be used through Bookwalker, or would I have to switch apps to look things up on it?

TL;DR: I’m basically looking for a way to add more/different dictionaries that I can use from within the Bookwalker app, either on iOS or Android.

wait… there’s an integrated dictionary in the bookwalker App…??
how…? where…? and how did I miss it !? xD
that was the reason why I never really used it despite “buying” all the books from the freebie thread lol

Well, it doesn’t work for manga, and the freebie thread is all about manga, right? Manga are basically images, so a dictionary couldn’t pick up the words.

That’s probably why it’s just Google Translate for manga. I don’t think the dictionary has any kind of OCR.

But I’m not talking about manga. There’s no dictionary for manga at all as far as I know. What I’m interested in is using a dictionary while reading novels. When I long tap a word on the Android Bookwalker app I get a “translate” menu option, and this brings up Google Translate. I’m hoping someone knows a way to add a different dictionary that can work from within the app, either on Android or on iOS.

On iOS you can use the built-in dictionaries (to enable them, hold for a moment on a word, select “Dict” and then “Manage” in the lower left corner). I have enabled Japanese, Japanese-English and also Chinese-English (it sometimes gives me meanings when the Japanese-English does not). Also make sure that if the meaning of the displayed dictionary entry is apparently wrong, you can often see more definitions by clicking on that entry (there is an arrow to the right of the screen to indicate that option). I’m explicitly mentioning this because it took me about two years to discover this option

For Android, I have no experience of my own, but we discussed this a while back and this is what somebody else found out:

博士の愛した数式 - The Housekeeper and the Professor

Good news. I just found an Android app named kaku which can do a dictionary lookup based on OCR. The handling is a bit unusual, but it works on all apps including bookwalker. You have a frame that you have to move and adjust on the text you want to translate. With a double click kaku simply opens a window on top of the running app. Here is a screenshot from the first page of the book: [Screenshot_20200811-210734_BOOKWALKER]

Maybe it helps you too…

Thank you. I have already enabled the Japanese and Japanese-English dictionaries on iOS and I’m generally happy enough with them, but especially the J-E one often fails to recognize words and I’m still not quite ready to make the effort for the Japanese-only one, so I only use it to get readings for now. I know you can buy more dictionaries through the dictionaries app, but I don’t know whether I will be able to use them through the app like this. If I can’t, takeboto or jisho are good enough anyway. (and yes, the clicking the entry to see more definitions thing took me too long to discover too

Kaku sounds interesting. I had come across a mention of it before and had actually installed it, but ended up not using it as it’s somewhat fiddly to aim correctly. It’s only slightly less of a hassle than switching between apps. What I’m looking for is the option to add my own dictionaries, paid if need be, so that they can easily give me a definition at one click from within the app. Why does Bookwalker have to make things so hard?

I decided to give Kaku another try, and I soon remembered what had bothered me about it. It wasn’t that it’s fiddly (which it is) so much, but rather that it’s OCR, even when it doesn’t need to be. I magnified the page to a ridiculous size, but it still insisted on recognising 藁 as 草.
Occasional ocr mistakes are no big deal of course, but not when the actual text is right there.

I was indeed wondering a bit how the OCR part would work out. I guess I know now…

What I’m interested in is using a dictionary while reading novels. When I long tap a word on the Android Bookwalker app I get a “translate” menu option

Sorry about, I misunderstood the question. 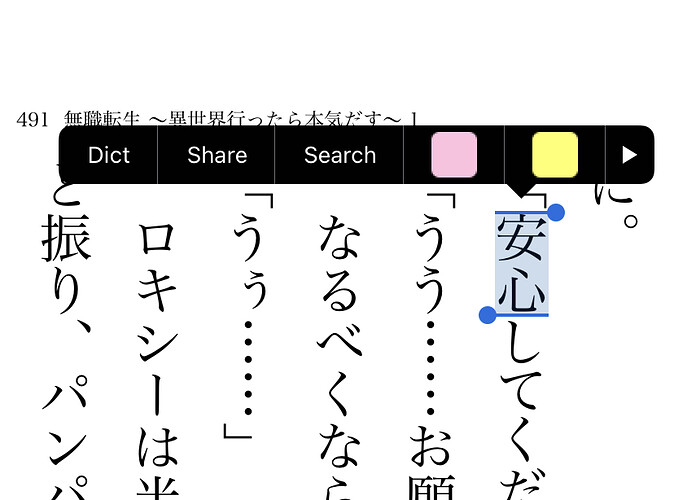 And then I get this 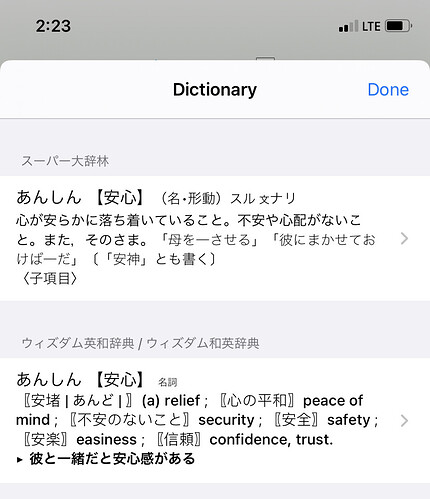 I think the only thing I did was what @NicoleRauch mentioned and enabled the IOS dictionaries.

Sorry, I think I misunderstand the question again.

The Dictionaries app isn’t integrated into the system like the pre-installed ones. You always have to go back to the app to check a definition. There is a setting that will auto lookup what you have copied, though.

Ah, thanks for this clarification. So it probably would be useless for Bookwalker specifically, as it doesn’t let you copy as far as I know.

You can, it’s just kinda annoying. You can either:

Oh cool, it seems that you can even tap Share after selecting the word in the search bar, and directly choose Dictionaries. I assume it works, because while I do have the app I have no dictionaries on it yet, so I get the message “Failed to get text from app”.

Is there any specific Japanese-English dictionary on there that you would recommend?

Edit: I tried the same thing on Android and apparently it won’t let me copy from the search bar! I have to go actually select Search on Google or Wikipedia and then select the text from there. That’s way too many steps, especially if I’m offline. When did Android start offering less freedom than iOS? Very annoying. I can select from the search bar after all, not by tapping and holding on the word but by double tapping in the search field, then selecting Select All. After that I can share with other apps, Takoboto among them. This opens the Takoboto app however, not a floating window. Not ideal, but better than nothing.

The Share feature doesn’t seem to work for the dictionary apps, since it’s sharing the book, rather than what you have selected. Not sure what the deal is there, to be honest lol

I often use Wisdom (despite it being built in, I still bought it on the Dictionaries app) and OLEX. I am waiting for a sale for the Genius J-E dictionaries since I have them on a pocket dictionary, but those three are good. I believe Wisdom and Genius are two of the top-rated J-E Dictionaries that aren’t like $100+.

Yes, the Share feature is very weird, and frankly useless. I didn’t tap Share directly from the book. I selected the word, tapped Search, then selected the word in the search bar, then Share… again. A few too many steps for my liking, but at least it seems to work. It even works with Midori this way, but instead of a floating definition I get a full screen of Midori, which is too intrusive. Maybe that’s configurable, I’ll have a look.

I’ve seen others also recommend buying Wisdom. If it’s already built-in, what would buying it accomplish? Is it just about having it more accessible through the Dictionaries app, or is it somehow better than the built-in version? (more definitions, better search?)

Edit: I looked at Midori some more. You can have it be a floating window (the option is hidden under the three dots at the top of the app), then push it to the right of the screen, accessible by sliding from the edge towards the center. This keeps it there but unobtrusive while you’re reading. Then Select word from Bookwalker >Seach>Select All>Share…>Midori opens the selected word’s definition in a Midori floating window. A good enough backup for when the built-in dictionary fails.

I found a semi-solution for Android too. Downloaded the dictionary app Aedict, and its paid plugin Aedict Reader Popup. Now from within Bookwalker, the steps are as follows:
Long press on word to select (adjust selection accordingly, it’s almost always wrong) - Select Search - Double tap search box and Select All - Expand menu by tapping 3 dots - Share - Aedict Reader.
Too many taps? Definitely. Apparently it used to work with just copying, but Android 10 doesn’t allow apps to read the clipboard any more, so that’s three extra taps than it used to be. Still, the end result looks like this:

Which is exactly what I was looking for, just with 4-5 more taps than I’d like. I suppose until Android decides to offer a decent dictionary service instead of Google Translate only (not going to happen), or Bookwalker makes it easier to send small chunks of text to other apps, this may be the best solution available.