How many active items do you have at once?

The title says it all, I’ve seen someone ask how many apprentice items you should have at once, but to me the more interesting question is how many unburned items are in your pile. Those should be the ones you would need to “actively” be prepared for.

Probably a lil less than you since I’m a level below, but currently around 1,100! Most of them I’ve known from previous classes/encounters before WK though so more like around 200 (?) I didn’t know initially.

I don’t think it’s a good idea to be anticipating which items will appear in your future reviews. The point of the SRS is to prepare you to be able to give the correct answer whenever something appears in front of you unexpectedly, as it would happen in a real world scenario. The downside to SRS is that it lacks context which the real world almost always provides.

I currently have 3114 unburned items, but the truth is that even burned items should be something that you’re ready to remember if you really want to be proficient in Japanese.

that’s why I’ve put “actively” in quotation marks. The whole point of the burn system is that you should be able to remember the burned items.

I currently have 2975, but I focus on my number of reviews per day and number of apprentices, careful not to create too many of them. Manage them is easier than worrying about many unburned items. The SRS will take care of the rest.

I used to do the whole list, but I find the ‘Apprentice’ number much better indicator of how busy it will be. They are normally harder for me, which is why they are in apprentice, and is related to how many you will have in total in the future. I try to never let apprentice get above 100.

Genuinely not criticising you here, just curious- why do you think it’s an interesting number?

I currently have 3173. That’ll keep going up for the next month to about 3700, just as a mechanical calculation of how fast I do lessons.

Once I start to get my first burn reviews in a month, then if I continue at my current pace and get them all 100% correct, then it’ll plateau around 3700 for a while. Since this is basically impossible (I’ll be delighted with 70% burn accuracy!) I think it’ll keep going up but much slower, as the new items I get in are partly offset by the items I successfully burn going out. If I slow down my learning rate, the overall total will drop as my burn items start being due faster than I’m adding new lessons.

My point is that looking at this number doesn’t actually tell me much useful information- eg whether I need to slow down because I’m getting too much wrong or am setting myself up for a ton of work in the next few days like keeping an eye on the apprentice/ guru numbers does. It’s just a very big number, that is a function (dependent variable) of other choices I’ve made to date. Why should I pay attention to it?

Regardless of the answer, you might be interested to know that another way of looking at this question has been discussed in detail here with pretty graphs, please enjoy:

About that workload graph... Is it correct? WaniKani

About this workload graph: [2wn7h3c] Firstly, kudos to whoever made it, I think it makes a useful point very effectively. But I also think it’s wrong. I put the data about how many of each item are available in each level, have the script run through the SRS progression of each item as efficiently as possible, and I get this: [image] The numbers along the bottom here are week numbers not level numbers (although basically the same I guess). Basically you hit full workload much more quickly th…

My point is that looking at this number doesn’t actually tell me much useful information- eg whether I need to slow down because I’m getting too much wrong or am setting myself up for a ton of work in the next few days like keeping an eye on the apprentice/ guru numbers does. It’s just a very big number, that is a function (dependent variable) of other choices I’ve made to date. Why should I pay attention to it?

This! My thoughts exactly. It doesn’t matter how many active items you have. If you’re doing immersion outside of Wanikani you are also definitely handling an even bigger number of “active” items that your brain is trying to learn. I honestly find that you’re able to learn any number of new things in a day and that there is no real limit to it - except for the arbitrary limits you put on yourself.

In the meanwhile, not getting constantly high Apprentice item numbers is about time-management and making sure you actually have the time of day to do your WK reviews. That’s all really. It’s not a limit in how much you can learn in a day!

The whole point of the burn system is that you should be able to remember the burned items.

You’ll remember the majority of them for the next 2-5 years roughly and some of them forever. But that 2-5 year period after WK is where you need to be reading in order to fully solidify them.

I suppose as a mental exercise it’s interesting to think about.

But practically, why should I worry now about a review that’s going to come up in a few months?

I’d much rather look at Apprentice count since those are going to be coming up for the next two weeks and it give a pretty good view of your current workload.

Looks like 722, and currently 640 of those are ready for review

Just to clear this up, I don’t intend to gather any useful data out of this fact, but it’s interesting to me, as once you start burning, you should technically keep to the same number of items if you keep up your pace. So I was just interested really.

After 67 days, this is my progress. Wonder when I’ll start burning. So far I’ve completed a level per week which seems comfortable but on LV10 I did deliberately slow down so it doesn’t become overwhelming.

As useful as the reorder scripts can be, I prefer sticking to the default order as doing the vocab, allows the Kanji to stick. What do you think? Do you reorder?

“Active” items is an interesting idea. I don’t consider anything above Guru to be very active, since it comes up in reviews so infrequently. The items I use Self-Study for are the current level of kanji, troublesome vocabulary from the last several levels (ahem, 準備, 評判, and 構造) and the kanji and vocab that reassert themselves unpleasantly during Guru II and Master reviews. There’s usually around five kanji a level that didn’t quite stick.

As for apprentice items, it’s usually around 100 (today is 88, but I’ll add another 14 kanji tomorrow), but fluctuates up or down by maybe thirty items naturally, as I tend to do around 15 lessons a day. I do have a fair amount of semi-free time and do my reviews spread out through the day. Without that, I’d have to go slower, since I average around 150-200 reviews a day, and anything over fifty reviews at a time causes my concentration to fail.

Finding a pace you like is tricky, as it not only depends on your ability to remember everything, but the payoff you get and what your life is like. I was pretty quick in the first 20 levels, because I wanted to read things. I’m slowing down a bit now that NHK Easy and Wikipedia aren’t opaque, and the kanji and vocabulary are getting more obscure. Though I still like learning the less ‘useful’ words. That may change in another ten or twenty levels, and I may slow down to devote more time to reading and listening.

It’s about six months from lesson to burn if you don’t make a mistake. I started last December and started burning in June. Enlightened → Burn is a four month wait. Things like 一人, 三日 and 九つ get to lie in wait for a long time

. Missed burns drop you down to Guru II, but if I’m being honest, I deserve it.

Only if you never miss anything. Here is my graph where you see that the number of active items is increasing until I completed level 60 and decreasing since. It’s currently 2952. 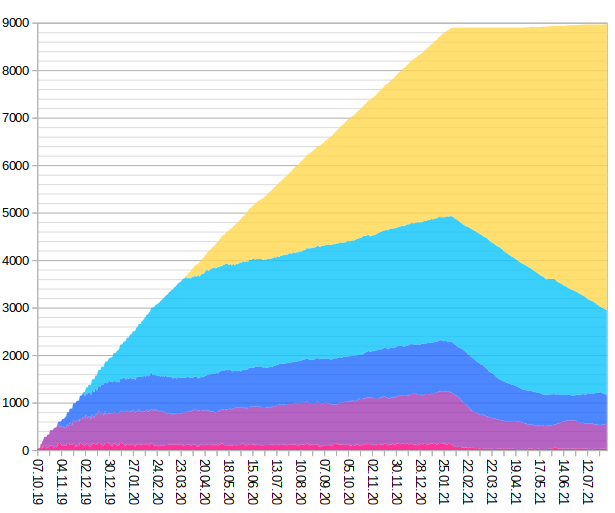