Have you played with ChatGPT for Japanese learning?

ChatGPT is an AI chat program that’s free to use and absolutely mind blowing. It can do all sorts of things from creating resumes to writing screenplays to writing essays at high school and college level to even crazier stuff like writing computer code and way more.

Any way, it can also take a Japanese sentence and translate it. That’s not very impressive, but it can also break down the grammar elements for you. I gave it this sentence that I found here in the community: たまに献血をしますから、知ってますけど、ほとんどのスウェーデン人からすると、性格などと血液型には関連はありません。

First I asked it to translate it and it gave me: “I sometimes donate blood, so I know, but for most Swedes, there is no relation between personality and blood type.”

Then I asked it to break down the grammar, and it gave me this:

That seems like it has a lot of potential at least to be really helpful! I haven’t dug into it deeply at all, but I’m initially really impressed with the grammar breakdown. I’m going to feed it some more casual speech and slang and see if it can do anything with that. I’ll be more impressed if it can!

You might like to check this thread and this one – the short answer is that the problem is that it will very confidently tell you totally wrong things about Japanese, which makes it tricky to use because you can’t trust it.

Sure - you’ll need to verify anything that you get from it. I wonder how often it’s wrong. I’ll check those threads!

As an example, in the sentence you gave it said that 「たまに献血をしますから」== “I sometimes donate blood because” but it should be “Because I sometimes give blood”. It got that right in its translation – this kind of inconsistency between things it says seems quite common.

I wanted to try it but they asked for my phone number, so I decided it’s not worth the trouble. No idea what they need my number for.

It does have potential, but ChatGPT is known to very confidently give incorrect answers, but sound so convincing that you think it’s correct. If you tell it to write an article arguing the truth of an incorrect topic, you’ll see what I mean.

It could be useful for some practice, but definitely double check its responses.

It’s free. I don’t remember if it asked me for my phone number or not though.

My intention is to use it as just one layer of my studying and will not trust what it tells me without verification.

My intention is to use it as just one layer of my studying and will not trust what it tells me without verification.

So your goal is to use it, and then verify everything it tells you? Seems like extra work to just end up finding the answer from a more reliable source.

It’s cool and all, but not worthwhile imo. Maybe it’ll get there one day though.

I have tried on three separate days to ask this thing questions and I have only ever gotten this response.

I assumed originally that it was just busy at that time, but I’m starting to wonder if the whole thing is a hoax. 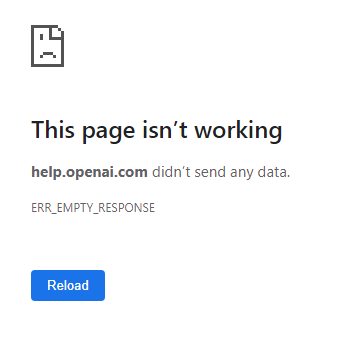 I can navigate the ChatGPT website itself fine, it just always returns errors when I enter questions.

Not that I care that much, just seems like a piece of crap.

(And yes, every other website I normally use works fine for me)

It’s needed to protect the site from getting abused.

ChatGPT was under heavy load the first few days and they have to limit people creating fake accounts. There are ways around this of course but I am not gonna mention them.

Try a different browser. (Try Firefox, Chrome is known to have this Issue)

You have to be very precisely.

If you ask ChatGPT to write you a script for a game in unity and you don’t specify that the game is in 2D and not 3D it will assume one of it and write you the code.

Also I agree that ChatGPT should not be used to learn from, ChatGPT is an AI that learns from human input and that can be false.
ChatGPT does not know what is right and wrong. If the Developers feed the AI with something the AI will believe it is correct. And everything made by humans is intended to have some kind of mistakes in them.

Try a different browser. (Try Firefox, Chrome is known to have this Issue)

I mean, if they can’t get Chrome working, I’ll just leave it for now.

That’s not it, it is a client based issue. If you try a different PC with Chrome it would certainly work. If not, then try it with a hotspot from your phone.

ChatGPT might not be still a good teacher, but it for sure can help you. For example, it can produce decent mnemonics. Check one of the threads someone linked, there is a prompt there witch make generating them really easy

i think its a pretty solid resource for me too. I have fun just asking it random questions in Japanese and seeing how it responds lol.