Does anyone say muscat?

However since moving to Japan, I have discovered that while Japan loves to plaster English everywhere, they use “muscat” in place of “green grape”. And looking up マスカット in English on google, all the results say “muscat”. What’s up with this? I understand muscat is a variety of green grape, but English speakers don’t actually say muscat when talking about green grapes, do they?

I’m an ALT and I’ve had an English teacher shocked to find out that there’s a difference word in English that we use. I get using “muscat” on Japanese things in Japan since the English isn’t there for English speakers half the time anyway, but it definitely seems wrong on anything targeted at English speakers.

Is muscat a word the average English speaker would be familiar with?

and no, I don’t mean the capital of Oman

I, too, learned “muscat” from living in Japan.

It’s not that shocking for it to have ended up that way (that マスカット is the word they use), though.

I’m not blaming Japanese people, I moreso was just wondering if I was crazy for not knowing this word. Kind of feels like I’m being gaslit by Japan, seeing perfect English written on things, and then the word “muscat” like it’s some regional thing.

It’s probably just one of many examples though.

Muscat isn’t used to my knowledge. We just call them grapes or green-grapes etc if a colour needs to be used for context.

guessing that the “green grape” Muscat has somehow become synonymous with white wine vs red… interesting language is fun!

Precisely which word each region decides to latch on to is interesting, though.

Japanese people take many English words and use them wrongly. Trying to think if English-speaking countries actually use that word the same way as Japanese people do, will take you nowhere. The best thing to do is just accept the Japanized-english-word as an entirely new Japanese word.

Yesterday I saw a tv show talking about weird habits and details specific to a single city or area in Japan. One of those was a city where people call flies as “ジョニー” (Johnny). It looks like decades ago an English teacher jokingly gave this name as an answer when a student asked him what they call flies in English, and apparently it spread and everybody in the city started calling flies as Johnny, even today.

Oh boy that sounds mighty confusing for German speakers, because Muskat is nutmeg… no way I would associate it with grapes when someone would start talking about them without context lol

Being french, if someone tell me they eat or drink “muscat” it will just feel perfectly normal ^^ 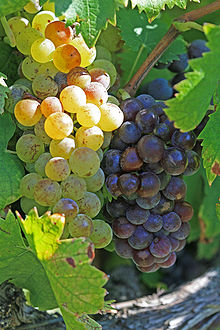 The Muscat family of grapes includes over 200 grape varieties belonging to the Vitis vinifera species that have been used in wine production and as raisin and table grapes around the globe for many centuries. Their colors range from white (such as Muscat Ottonel), to yellow (Moscato Giallo), to pink (Moscato rosa del Trentino) to near black (Muscat Hamburg). Muscat grapes and wines almost always have a pronounced sweet floral aroma. The breadth and number of varieties of Muscat suggest that it is...

Don’t see why it would be that surprising. Moscato is an Italian wine made from muscat that is very famous.

Trust me, go far enough outside the big cities and the perfect English written on things goes away very quick.

The first thing I had to think of (in the context of grape discussions) was Muskateller – Wikipedia, a very sweet wine

But I don’t think the word Muskat (the grape) is commonly used or would be understood by non-wine experts here, especially because of the overlap with nutmeg.

It’s not about whether or not people say it in other places. マスカット is a word that means grape in Japan, simple as that.
Even though a lot of katakana words are based off, sound like, and function like English words, it’s important to remember that they are Japanese words.
Many katakana words aren’t even derived from English. Take バイキング (buffet) or パン (bread) as examples. Try using them in an English speaking country as you would in Japan and you’ll likely be met with just as much confusion as if you tried to use マスカット.

I just think that it’s likely that these are all instances where Japanese people are the target of the English, for instance in catch phrases on a snack or drink. It’s not like it’s meant to be a translation targeting English speakers.

That means it makes sense to use muscat in the English, since Japanese people recognize it.

EDIT: Additionally, it should probably be the case that things like jmdict (what Jisho uses for its dictionary entries) should also list something like “green grape” generically. Because they call all green grapes マスカット without regard for the variety of grape. They don’t use it the way we use the word “muscat”, so it would help to include a definition that covers how they do use it.

That means it makes sense to use muscat in the English, since Japanese people recognize it.

Out of curiosity though… does ‘muscat’ refer to all green grapes in Japanese? Or is it just that a very specific variety is common in Japan, and that’s how マスカット became the default word for green grapes? (I’m asking because my JP-EN dictionary translates マスカット as ‘muscat’, not ‘green grape’, and even the definition I’m seeing in Japanese is restricted to an Arabian grape variety.)

Because they call all green grapes マスカット without regard for the variety of grape.

Ah, I see that you answered my question while I was typing. Thanks.

I would be kind of shocked if you showed a Japanese person a green grape of a different variety and they didn’t say マスカット. They don’t think about the variety.

Guess I should still ask… are muscat green grapes actually common in Japan?

Probably? I have no idea, since I rarely buy grapes. I can take a look next time to see if the grapes labeled マスカット have more detailed information on the signage elsewhere.

OK, no problem! I just thought it would be interesting to know. It would be great if you could take a look next time, but no need to trouble yourself, of course.

I assumed musket was a type of red grape, because of the fortified wine ‘muscat’ which is red.
https://www.danmurphys.com.au/product/DM_904811/mcwilliam-s-hanwood-estate-muscat
I get my Dad a bottle at xmas.

Now I understand what is written on the chu hai with the grapes on the can. Most katakana words I read them once and if I can’t work it out, just forget about it. The picture told me what was inside. Now I know it was supposed to say muscat, and that meant green grapes. Who knew!