How about the opposite(?) where you can’t see the kanji itself, but only the filled in chunks of any parts that were closed areas?

1st. didnt even know the word
2nd. I got this one
3rd. Nope lol
4th got this one
5th nope haha. the mu was guessable. but the triangle threw me off hard because i didnt know english letters were ok. They might have said its ok in the video but im listening to something else so I didnt hear the audio.
6th what lol

Fascinating but I’m not there yet ^^

You got them, and the missing one is 航行

This was from a few weeks ago but I just watched a video which reminded me of it. So as it turns out to my previous complete ignorance, Japanese people don’t say “how are you?” when greeting each other. At least, not most of the time. The much touted “お元気ですか” is often claimed to be the go-to follow-up to こんにちは in beginner textbooks, and for about 6 years, I earnestly believed that was what you should say when greeting a friend or acquaintance. Even despite the fact that in my 2 years of living in Japan, I don’t think I’ve ever heard it used in that context.

I work as an English teacher and quite often I get the same bus as another teacher so we’ll talk on our commute, and usually they like to greet me in English to practice what little English they know. So we’ll usually have a normal English greeting where we ask how each other is and such. Well sometimes we’d greet each other in Japanese, and so I’d want to ask them how they were in Japanese, so what do I go with? Well, お元気ですか of course. It doesn’t allow for the same range of responses that “how are you?” does, but it’d seem rude not to see if they’re doing alright, right?

Well, as it turns out, nope. Not at all. In fact, after about 2 years of bus greetings, the teacher finally worked up the courage to correct me. They said something to the effect of: “you know, Japanese people don’t actually greet each other by saying お元気ですか, right? We usually just say hello, unless we’re actually checking in with the other person”. Well, I was both shocked and not surprised at all. It made complete sense. After all, I’d never actually heard Japanese people greeting each other in that way so why didn’t I question it earlier? I never stopped to think that this aspect of Japanese and Japanese culture would be different because I regarded it as such a core part of communication. You greet, you see how each other are, you talk about things that have happened, etc. It’s just part of the flow of human interaction. Or at least, so I thought. Like word order it’s a purely subjective thing and it’s just one of the many ways that the language(s) we speak influence how we think. I feel like I should have known this sooner, but, going off this recent thread, I’m glad I was able to be corrected on it.

tldr: Apparently お元気ですか isn’t used how textbooks teach it because Japanese people don’t ask “how are you” usually

Are you this guy by any chance? 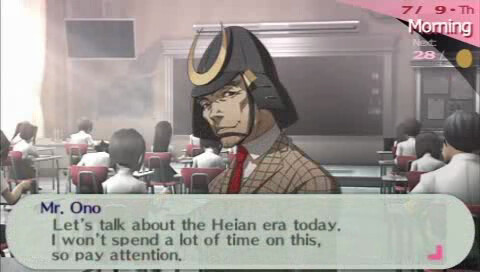 I think I only ever asked family members after not talking to them for a long time. But often with coworkers its just Good Morning and お疲れ様です. If I really cared how they were doing I would probably say 調子はどう？But otherwise 元気ですか has been only a family and friends thing.

I remember being super torn between amusement and aggravation on the day I learned that “Shizuka” meant quiet, because it meant that “Shizuka Doumeki” from xxxHolic had a ridiculously on-the-nose name.

I also have a little celebratory moment every time I figure out another of the name puns in Boku No Hero Academia (Baku meaning bomb and Katsu meaning win, Kaminari meaning lightning and Denki meaning electricity, Sero meaning cellophane aka tape…) I’m pretty sure the entirety of class 1-A has homophones or other sorts of puns in their names, I just have to figure them all out. It’s a fun, accidental way of measuring my progress

all the names in the show have pun names

every time i understand a new one i also have that little oh moment!

Yeah, exactly! I recently learned what tsuyu’s was, because a fellow sensei at the school I teach told me that the rainy season is called tsuyu.

Which, of course, was the “oh!”/“are you kidding me” moment, as usual

My Hero is really aggressive with those, but thats kind of what makes the names easier to recognize IMO.

Yeah, it’s the main reason I notice them. I’m sure there’s some much more subtle ones out there that are 3000% going over my head.

(In fact, reading @Wantitled’s original post for this thread has me wondering if the homophone of “Sengoku” in One Piece is intentional, given the whole Marines vs Pirates theme going on there.)

You should watch (or read) Komi-san. Punny names all around

My favourite so far is 雪ノ下 雪乃, Yukinoshita Yukino in SNAFU. Especially since she gets the “ice-cold” nickname.

Just made my first Japanese word

I learned 開発, developing, so from that I guessed that I could actually tell what I am in Japanese, 私は開発者です😁

That there are a lot of Chinese Hanzi and Japanese words that are similar! I was learning Chinese and when I went to Japan, there were a lot of words that looked familiar to me. Now that I am using Pandanese for Chinese and Wanikani for Japanese, it reminded me of how similar some characters are!!

I’m constantly surprised by how ordinary some words can be. Like doubutsu is “moving thing” ? and Hiroshima just meaning wide island, or Tsunami sounds like (Tsu) strong (Mi) Wave, stuff like that. It’s less mind blowing and more like disappointment. I heard Chinese can also be like this, where owl is spelled 'cat face bird".

But the biggest realization is that Japanese only has 130 or so unique sounds and yet with 3000+ written characters recommended to function professionally … yet children under the age of seven who can’t read seem to be able to speak well and tell elaborate stories, navigating synonyms effortlessly. Makes you wonder.

But funny enough, I just had the pleasure of watching two older women misunderstand each other in a spectacular way. The older woman used “hippa” to describe people leaving, but the daughter understood it as someone pulling people away. Both native speakers. Good grief.

Not quite, the kanji are