Anyone else bothered by plural behavior in reviews?

I found this thread where a staff member confirmed that they intentionally changed things so that WaniKani would no longer accept, say, “books” instead of “book” in reviews.

Given that there is no plural marker in Japanese and a vast majority of words can be used when talking about one or more of the thing in question, I find this decision baffling, and my biggest pet peeve when doing reviews is being told WRONG or even “close but not exact” (which might be a script I have, idr) when I do something like put down “desire” instead of “desires” for 欲求. I have a script that lets me retry and answer, thank god, but I end up sitting there for 30 seconds trying to figure out what other synonym they’re looking for. I’d be even more upset if I lost multiple SRS levels for being correct but missing a linguistic feature that doesn’t even exist in the target language.

I understand why you might want to lead users towards associating certain words with the plural instead of singular, or vice versa, either because it helps avoid misunderstandings as to which meaning of the word you mean (relative vs relative), or because the English is basically never used in the singular (exploits), but this design decision should not extend to the review phase. Why in the world would it ever be useful to penalize a learner for associating 豆 with “bean” instead of “beans”?

I’ve been writing the missing plural/singular form in the user synonyms section every time this comes up, but I shouldn’t have to be wasting my time doing that.

What do you guys think? Is there some reasoning I’m missing?

Edit: I think this must just be my script. I installed it so it would stop taking misspellings or entirely different words, and didn’t even think about the fact that it might be causing my issue. In my head it was preventing the word from being marked wrong by giving me the “close but not exact” shake, but it probably would have gone through without, huh.

Still might be nice to have the plural/singular form whitelisted instead of just accepted as “close enough,” but I retract my complaint. Spoilering the text above since there no strikethrough option I can find.

Maybe you have a script to disable the fuzzy typo checker?

I might be completely wrong but WaniKani never marks me wrong for lack of pluralization. I remember I always type bean instead of beans

@Mods would you consider adding “poor people” as an allowed answer to 貧乏人()?

Yeah, I just checked 子供 (figuring plurals without ‘s’ are the ones most likely to be actually marked “wrong” as opposed to passed with “close enough”) and it allows both “child” and “children”

That must be it, yeah. I feel silly now. Thanks for this

Yeah I don’t understand why they did this either. I’ve been corrected that it’s my own script that is causing my issue, but it wouldn’t have that issue if plurals were whitelisted by default instead of passively accepted via “close enough” typo rules.

Unless there is a very specific case that you care about, that should be simply either singular or plural. I usually don’t mind remembering “meaningless” things a little more, really.

For me, this has always been just a Finger.

Nonetheless, I noticed a case that both singular and plural forms are explicitly mentioned in the synonyms. 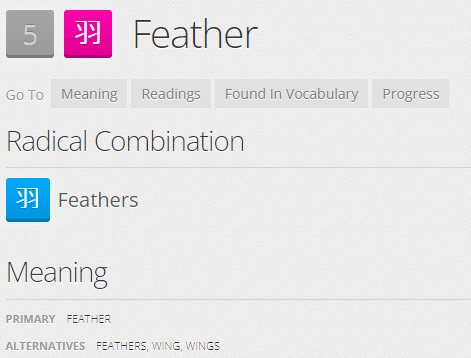 Personally, I dislike typo allowing (then trying to patch it via forum feedback?), as far as saying this is probably a worst WaniKani feature ever. I understand that it makes WaniKani easier to use, but it should be able to be turned off (otherwise, UserScripts are fragile). Typo can be reduced when people can look at screen while typing, and read Kana well.

I think dictionary form (of English words) should be preferred, unless there are specific reasons, so yeah, bean without s.

In other words, beans seem to imply that there are some hidden reasons, especially probably for non-English natives.

I think the idea behind some pluralizations is that you’ll see them in plural form more (i.e. you’ll be eating “beans” more often than a single “bean”), and probably also partially to help accustom users to the idea that there is no plural in Japanese, which is something a lot of people have issues with (probably because everything defaults to dictionary form, as you prefer). So in that sense I have no issue with it. But they should both be considered correct answers. Using the typo feature to accept variation in grammatical number is either laziness or pure serendipity.

That said I don’t mind the typo allowance as a feature otherwise. I have a script that makes me spell things right for my own sake, but people aren’t here to learn to spell, they’re here to learn Japanese. Even if I’m looking at my keyboard or at my screen, I make typos all the time, so it’s not necessarily something that people just have to stop being lazy to avoid.

Perhaps not as loose as it is now, given the insanity that can be found in that typo thread you refer to, but one or two characters off maybe.

I know this isn’t the point of the thread, but I’ve heard the singular exploit plenty of times.

In terms of “he used an exploit to get around the firewall”? The one I’m thinking of (績 - lvl 32) is exploits as in “his exploits were known all over the country” (“a bold or daring feat.”). That one rarely gets used in the singular.

I should have specified above, sorry.