I’ve been translating physical paper on ink manga wherein there’s no furigana and found radical lookup tedious, and the workflow for using Google Translate less than ideal. I’ve been using Google Translate for kanji recognition when I was too lazy to try to do radical lookup, but I don’t want translations of whole sentences, I don’t want to have to select portions of an image with a finger rub, and I want all japanese in kana (no romaji please).

A while back I stumbled across Google’s machine learning kit for a different project I was working on and realized that I could wrap a UI around its kanji recognition API and make it a better tool for language learning.

Note that there’s no on-device support for kanji recognition in Google’s ML Kit at present, so it uses the Cloud Vision API and that costs money once you hit the 1000 requests cap for any individual account. Hence, this isn’t pushed to the play store and you must jump through some hoops to build it. But for people familiar with android development, perhaps it’s useful. So, in the interest of community, sharing.

I find this workflow much better when translating. 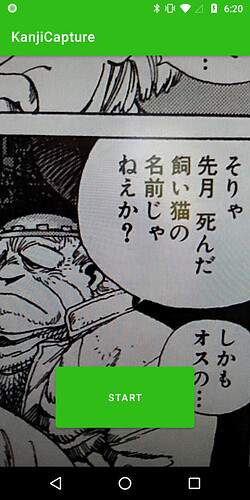 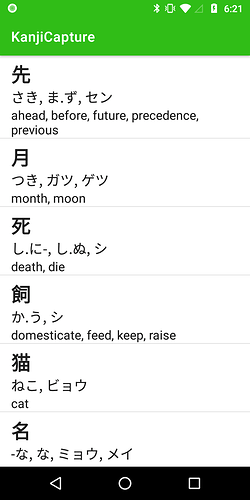 Clicking on an item redirects to jisho.org 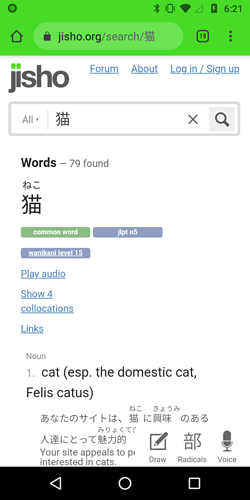 This is frustrating, I know, and whilst I don’t know about manga, the Kindle app has a Japanese → English Dictionary you can install that will allow you to find words by highlighting them.

However, this is a bit temperamental and doesn’t work for manga, so if you’re dead set on that I would recommend Rikaikun.

I have a Kindle device that I really like for reading english novels, but that doesn’t do any good for the stack of physical manga I brought back from my last trip to Japan. And I still find something tactile and satisfying about ink on paper. So I wanted a streamlined solution for transferring that ink on paper to, characters I could lookup in KANJIDIC2, which allowed, in effect to redirect directly to jisho.org. And I can’t draw kanji on my phone to save my life, so that category of app was out. Rikaikun doesn’t appear to do the actual image recognition, so

I’m not sure it’s any better than radical lookup?

At any rate, the focus was on a small, dead-simple, do one thing, do it well, application tailored to kanji learning. I’m sure there are other things out there that might do similar things, but not in the workflow I wanted, so I made this…

I see what you mean. My apologies, I jumped to the conclusion that you were talking about digital manga.

For physical manga, other than Google Translate, I would try to use a image to text scanner and use something like Rikaikun from there. Would that be a good solution?

At any rate, the focus was on a small, dead-simple, do one thing, do it well, application tailored to kanji learning.

If you find something like that, let me know. But I don’t believe thing that something of that convenience actually exists

If you find something like that, let me know. But I don’t believe thing that something of that convenience actually exists

It exists. It’s here. You just have to have some experience with android development and a google cloud account with the vision api enabled in order to use it.