Definitely a cliff-hangar! Really makes me want to keep reading. More exciting of an ending than volume 1 was for sure.

Also I really like the pace of 1 chapter a week, especially since a lot of these chapters tend to be very light on text. Maybe it’s worth putting that up to a poll again?

I was thinking we’d keep the pace of 1 chapter a week throughout the rest of the series. We could even bump up to 2 chapters a week, but I know a lot of us are reading in multiple book clubs. Is there enough interest in increasing the pace again that we should have another poll?

Looks like we’ll be starting volume 3 on July 2nd (no break). I don’t think there’s enough people who haven’t voted to change the outcome, but I’ll leave the poll open for a bit anyways. I hope the people that wanted a week break can catch up without much trouble.

2 chapters a week might be a little too fast, although if there’s enough interest I’d be up for the challenge! You could certainly create a poll to see what people are feeling though

See you all in volume 3!

Thank you for your hard work everyone!
Started only recently.
I’m trying to ketchup. Cool story.
I see that Gosho speaks differently, like using different endings as っす. What’s up with that?

I see that Gosho speaks differently, like using different endings as っす. What’s up with that?

My understanding is that this is simply a quirk of speech, where some people use an abbreviated form of です, simply pronounced as っす (with a more extended “s” sound, basically).

An example from another manga: 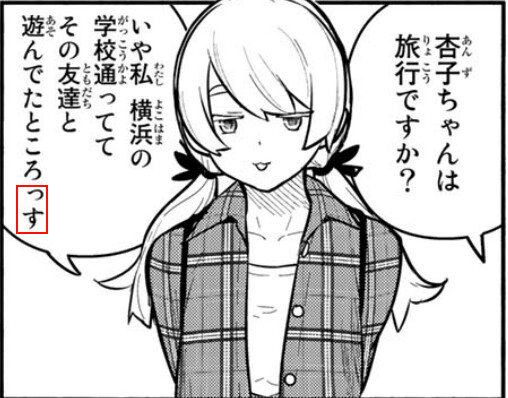 I thought that too. It was confusing at first, but then I could fairly understand what’s she saying.
I was just wandering why she speaks so.
Is it a local accent, is she from a different town?
Is it a teen slang. Or she’s just lazyish with speech?

Sorry, I’m not knowledgeable in Japanese dialects, so I can’t really say with certainty.
However, I don’t think this comes from any dialects that I’ve run into - specially given that she basically just talks in standard japanese except for that quirk.

From the characters I’ve seen talking like that, they all had various ages (even an old lady) so I don’t think it’s particularly a teenager thing.