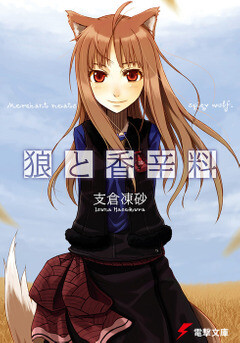 Fellow -るる collectors will find one on page 184, though it is only the common or garden 恐るる.

I guess this week’s section wasn’t as interesting as last one, at least for me. Nevertheless it was still interesting to see Holo with a hangover and ロレンス teasing her.
I also found quite interesting that it is mentioned that people with long hairs are usually aristocrats because only wealthy people would have the means to tend and take care of it. It makes sense considering the setting we’re in.

Fellow -るる collectors will find one on page 184, though it is only the common or garden 恐るる

I’m pretty sure it’s the first time I’ve seen this construction. Is there a grammar rule to るる? I haven’t been able to find one at least so far. Well, seems I’m a -るる collector now too

I’m pretty sure it’s the first time I’ve seen this construction. Is there a grammar rule to るる? I haven’t been able to find one at least so far. Well, seems I’m a -るる collector now too

It’s the way to conjugate 二段 verbs into 連体形 apparently. You add a る at the end of the verb, so if the verb already ends in る you end up with るる.

Apparently just like modern 一段 verbs, they have two versions, one for ～い and one for ～え sounds.

I’ve only seen this once before, but I don’t remember where. I thought it was in 狐笛のかなた, but I can’t find it there, so I guess I’m misremembering.

It seems like 恐るる specifically is used in some common phrases, like 恐るるに足りない here and 恐るるなかれ, since they both have dictionary entries in J-E dictionaries. I can’t imagine you’ll see it very often outside of these set phrases, unless you decide to peruse some actual classical Japanese literature.

Is there a grammar rule to るる? I haven’t been able to find one at least so far. Well, seems I’m a -るる collector now too

It’s a survival from Classical Japanese; @seanblue has given the rule for it, but it’s complicated because the classical verb and the modern verb aren’t necessarily identical. This stackexchange question says that the verb 恐れる (おそれる; to fear) in modern Japanese was 恐る (おそる) in classical Japanese. So (since modern Japanese 連体形 is the same as the plain form) classical 恐るるに足らず is the same as modern 恐れるに足らない, but that doesn’t help as a general pattern for dealing with -るる necessarily.

(I notice them because (a) I don’t entirely understand them and (b) they’re practically the only situation where you get two る together, so they stand out…)

The site I linked to gives examples. One is 起く as the classical version of 起きる. This seems like a common pattern though, as it also gives 落つ instead of 落ちる and 懲る instead of 懲りる. (恨む stayed 恨む for some reason though.

Wow, quite interesting. Thanks a lot for the explanations!

There is wolf I guess, but not a whole lot of spice so far in the book

I’ve had it on my todo list to ask a question about this chapter for a while. Better late than never!

I’ve read this over and over and I’m still not sure I get it. I looked up 口 and I think it might be 「物事を分類したときの、同じ種類に入るものの一つ。また、その種類。たぐい。」(which is not a meaning I was aware of). Is that right? Is she asking “Is it the kind (of hangover) where you didn’t make it to your own inn?” Or something?

I’m not sure either, I managed to read straight past this, probably because the rest of the sentence meaning seemed clear to me… The overall sense is that the innkeeper is (correctly) guessing that they’ve dropped in here because they couldn’t manage the walk back to the place where they’re staying. I hadn’t encountered that meaning of 口 before either, but I agree that it looks like this is the “kind/sort/type” sense. I slightly feel like it’s more referring to “kind of situation” rather than “kind of hangover”, though.

Incidentally, I read the innkeeper as male from their speech style, though it doesn’t I think explicitly say either way.

Incidentally, I read the innkeeper as male from their speech style, though it doesn’t I think explicitly say either way.

Ha you’re probably right about this!
Thanks for your input, glad we mostly agree.